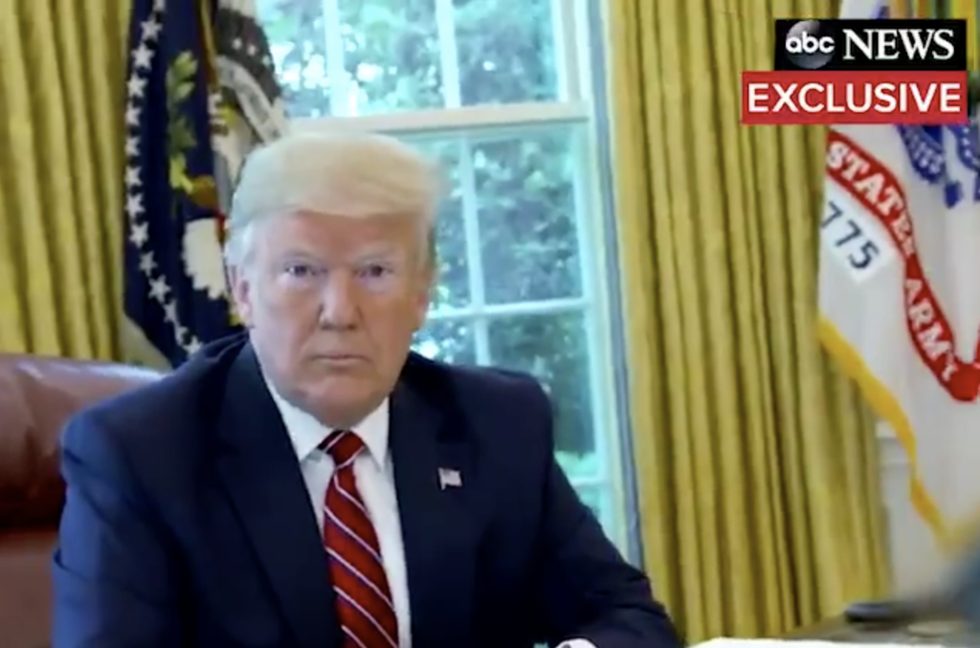 President Donald Trump had already raised eyebrows in an interview with ABC's George Stephanopoulos for claiming he'd possibly accept foreign interference if it ensured a win in his 2020 reelection bid.

But now another candid moment from the interview is making waves.

As Trump was bragging about his "financial statement" to Stephanopoulos, the President's Chief of Staff, Mick Mulvaney, let slip a cough while Trump was speaking. The president finished his remarks before demanding that Mulvaney leave the room and then asked for a second take.

A visibly agitated Trump says in the video, after the cough:

"Let's do that over. He's coughing in the middle of my answer. I don't like that...If you're gonna cough, please leave the room. You just can't, you just can't cough."

Trump went on to finish his answer, claiming that he'd like to release his "phenomenal" financial statement, but that it's not up to him (it is).

The outtake went viral on Twitter, and at least one journalist heard from a 2016 Trump campaign employee about the president's distaste for coughing.

"I was told by multiple people when I came aboard to never cough or sneeze while in the presence of Trump. He thinks it’s a sign of weakness and lack of control. Nobody ever recovers.”

Text from former 2016 Trump campaign staffer: “I was told by multiple people when I came aboard to never cough or s… https://t.co/sUiQAq8eQO
— Jacqueline Alemany (@Jacqueline Alemany) 1560735876.0

@ABC @GStephanopoulos Wow. He really thinks this is just another episode of the Apprentice. 😯
— Lizzybits (@Lizzybits) 1560739680.0

@ABC @GStephanopoulos 🙄 So controlling and easily irritated! He was acting like the director of The Apprentice. One… https://t.co/B7pY7ybSZl
— Brooklyn Girl Tam (@Brooklyn Girl Tam) 1560734486.0

Others weren't distracted by the cough, but by the president's empty assurances regarding his financial statements.

@ABC @GStephanopoulos Theatre of the absurd here. Trump says he would love for his “financial statement” to be made… https://t.co/aRbe5XbJdP
— Chris Engelhardt (@Chris Engelhardt) 1560776858.0