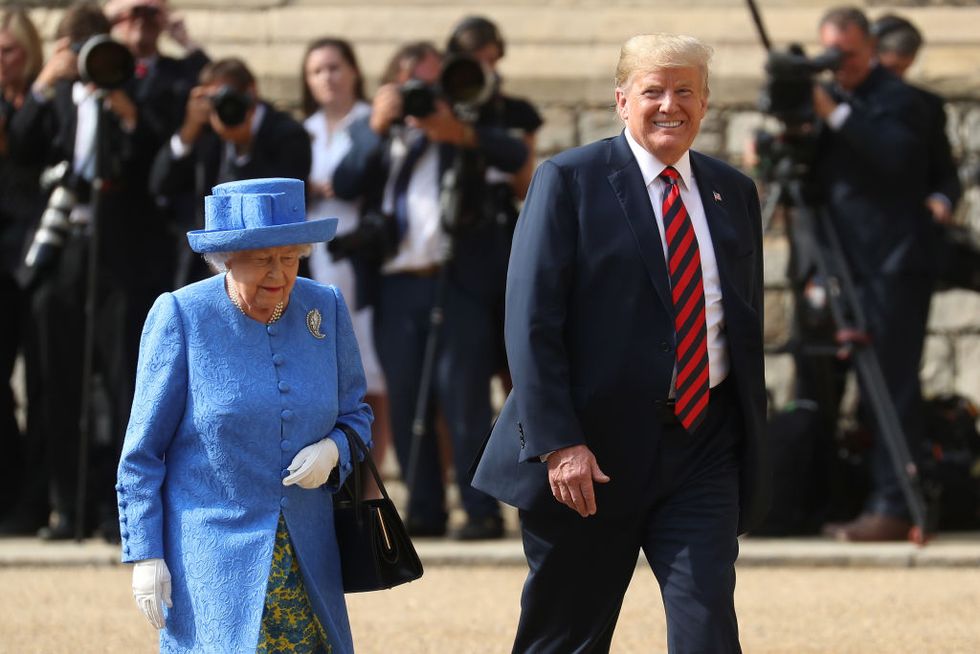 WINDSOR, ENGLAND - JULY 13: Queen Elizabeth II and President of the United States, Donald Trump inspect an honour guard at Windsor Castle on July 13, 2018 in Windsor, England. Her Majesty welcomed the President and Mrs Trump at the dais in the Quadrangle of the Castle. A Guard of Honour, formed of the Coldstream Guards, gave a Royal Salute and the US National Anthem was played. The Queen and the President inspected the Guard of Honour before watching the military march past. The President and First Lady then joined Her Majesty for tea at the Castle. (Photo by Chris Jackson/Getty Images)

President Donald Trump, speaking at a rally in Pennsylvania yesterday, denied that he had kept Queen Elizabeth II waiting when he visited England last month. At the time of the meeting, The Daily Mail accused Trump of breaking royal protocol by forcing the queen to wait for him in the heat.

At the rally, Trump called the reports that he had kept the queen waiting “fake, fake disgusting news."

His full remarks are below:

Trump's comments were immediately derided by those who said he was, in fact, late for his meeting with the queen.

@Channel4News @realDonaldTrump Donald Trump has respect for no-one. Not even for himself. Anyone with any self-resp… https://t.co/gxyo7bi3y2
— Kevin Dunn (@Kevin Dunn) 1533284652.0

As the rally continued, Trump praised himself for his performance during June's summit with North Korean leader Kim Jong Un, which many criticized as more of an opportunity to legitimize a totalitarian regime than an actual endeavor to reform policy toward the nation historians have referred to as the "Hermit Kingdom."

“I said the media is gonna treat me finally so good. So good. I mean, it’s gonna be so great, baby. I’m looking so forward to getting up tomorrow and reading those dying papers,” Trump said.

The president also came under fire for his claims that Russia did not want him in the White House, a remark no doubt meant to sow distrust for Special Counsel Robert Mueller's investigation into whether Trump, with the help of the Kremlin, swayed the 2016 presidential election.

"I’ll tell you what, Russia is very unhappy that Trump won, that I can tell you. But I got along great with [Vladimir] Putin," he said, touting his summit with the Russian leader last month which sparked controversy when, while speaking at a press conference alongside Putin, he sided with Russia over the assessment of U.S. intelligence agencies that Russia launched cyber attacks against the United States during the 2016 election cycle.