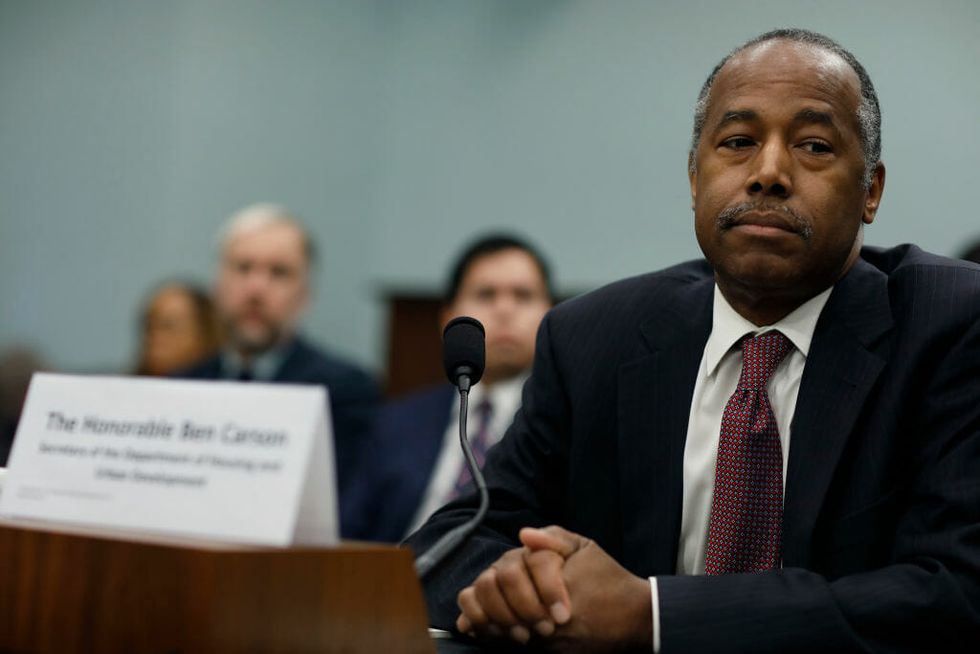 Secretary of Housing and Urban Development Ben Carson arrives to testify before the Subcommittee on Transportation, Housing and Urban Development, and Related Agencies on Capitol Hill March 20, 2018 in Washington, DC. Secretary Carson has drawn fire from lawmakers for purchasing furniture for his office suite despite agency cutbacks. (Photo by Aaron P. Bernstein/Getty Images)

Ben Carson, the Trump administration Secretary of Housing and Urban Development (HUD), told a House committee on Tuesday that the $31,000 dining set he ordered for his office was his wife, Candy's, fault. Appearing for the House Appropriations subcommittee that determines the Department of Housing and Urban Development’s budget, Carson took no responsibility for the purchase.

Trump's HUD secretary is just the latest member of his administration to draw fire for their spending habits. Trump's Health and Human Services secretary, Tom Price, previously resigned during inquiries over his excessive spending. Treasury secretary Steve Mnuchin continues to draw criticism for his travel expenses.

During the hearing, Carson gave a somewhat disjointed explanation for the selection of the table, chairs and hutch. Once the $31,000 price tag became public, it turned into a public relations nightmare for the beleaguered Trump cabinet.

“I was not big into redecorating. If it were up to me, my office would look like a hospital waiting room,” claimed Carson. Trump's HUD secretary also told the House committee he had no idea a $5,000 spending cap existed on cabinet secretaries for redecorating their offices.

I invited my wife to come and help. I left it to my wife, you know, to choose something. I dismissed myself from the issues.”

But emails released under a Freedom of Information Act (FOIA) request last week contradict Carson's account. They include emails between top aides discussing how to justify getting around the $5,000 cap Carson claimed to be unaware of.

In one email, HUD administrative officer, Aida Rodriguez, wrote one of her colleagues “has printouts of the furniture the secretary and Mrs. Carson picked out.” This contradicts Carson's claim before the committee that he had no part in the furniture selection and was unaware until the price became public knowledge.

American Oversight made the FOIA request for the emails. Clark Pettig, their communications director, stated,

Setting aside the issue of whether it is appropriate for Secretary Carson to delegate decisions regarding the use of taxpayer funds to his wife, this is now at least the third version of Carson’s story about the furniture.”

Members of the House Appropriations subcommittee also voiced their frustrations. Carson's statement before them presented problems with the timeline of events. By Carson's account, he was outraged by the high cost of the set while being completely ignorant of the price tag or the furniture selected.

“I would like to register my frustration with the ethical lapses,” said Democratic Representative David E. Price of North Carolina. “It is bad enough."

More disturbing are the false public statements, compounded by the roles that the secretary’s family has taken in the department. Public service is a public trust.”

Representative Price referenced Carson's family because of questions raised by the secretary's extensive reliance on his family since taking office.

Carson allowed his son, Ben Jr., to organize an official HUD visit to Baltimore last summer. At the time, Carson Sr. ignored the advice of HUD lawyers who claimed the action could be seen as a conflict of interest. Ben Jr., an investor by trade, is co-founder and partner of Interprise Partners.

Access to government resources, connections, and communications by non-appointed, non-vetted family members, many of whom lack property security clearances, continues to plague the Trump administration beyond HUD. Questions remain about access by the president's own daughter and son-in-law.