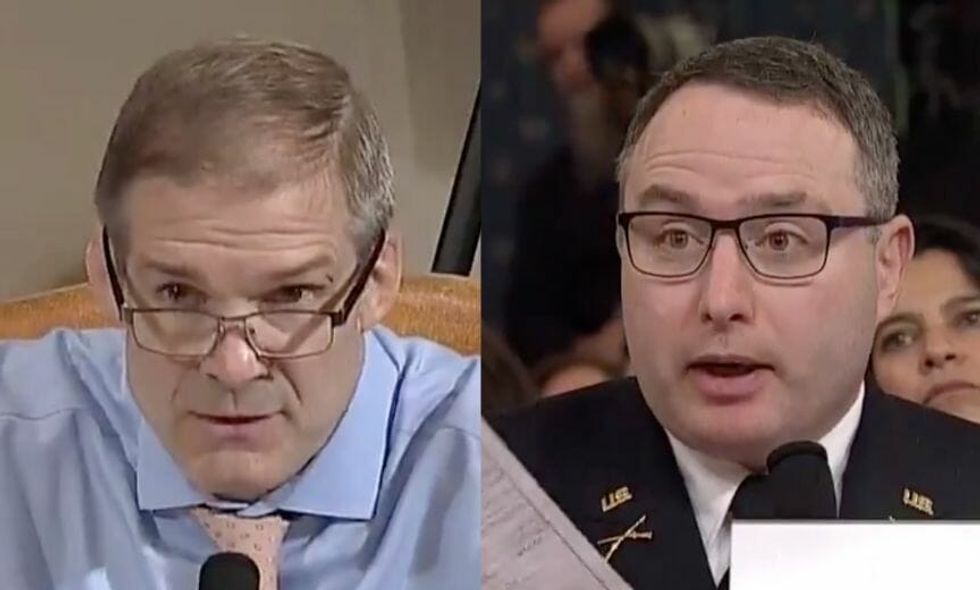 Despite decades of military service and numerous commendations for such service (including a Purple Heart), House Republicans leapt to attempt to discredit Vindman in defense of Trump, even implying that he has a dual loyalty to Ukraine because he immigrated to the United States as a child.

But Vindman had the perfect rebuttal.

When asked by Rep. Jim Jordan why his former boss testified he had concerns about his judgment, Lt. Colonel Vindman… https://t.co/pmekhz7T4k
— Reuters (@Reuters) 1574187900.0

Vindman responded by reading aloud a recent evaluation by one of the very people Jordan invoked to cast doubt on the Vindman's judgment: Fiona Hill.

“'Alex is a top 1% military officer and the best Army officer I have worked with in my 15 years of government service. He is brilliant, unflappable, and exercises excellent judgment’—I’m sorry—‘Was exemplary during numerous visits,’ so forth and so on. I think you get the idea.”

Others got the idea as well.

Despite providing his performance review, the White House itself cast doubt on Vindman's service via Twitter.

Tim Morrison, Alexander Vindman's former boss, testified in his deposition that he had concerns about Vindman's jud… https://t.co/sNcdNU9HXa
— The White House (@The White House) 1574185791.0

That went about as well as it did for Jordan.

@WhiteHouse Liars and shame on you for your unpatriotic propaganda. Shame and disgrace that the White House has bec… https://t.co/sPytzGbCbF
— Jamie Schler (@Jamie Schler) 1574186852.0

With an approval rating that's never risen above 50 percent, and with support for impeachment growing every day, it's fair to say Trump is the one with the judgment issue, not Vindman.