Tucker Carlson Just Proved He Doesn't Understand How Wind Power Works, and People Are Dragging Him All the Way Down 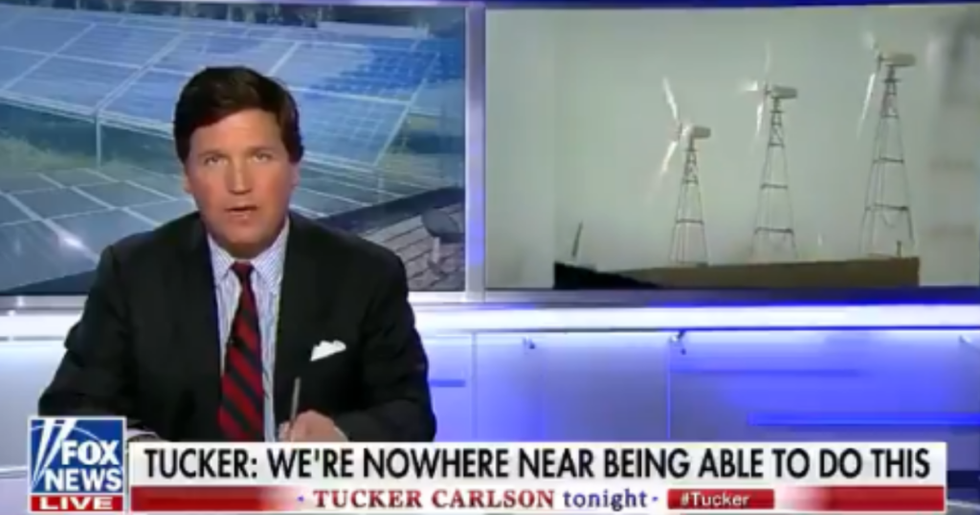 As the polar vortex continues to dump Arctic air across the country, Tucker Carlson on Thursday called wind energy a "scam" and insisted it does not work in the cold.

Carlson ripped into the Democrat-backed Green New Deal, which seeks to revamp the nation's power grid with renewable sources of energy, such as wind and solar.

"Wind power is a scam," Carlson said. "It's an elaborate ripoff perpetuated on impoverished rural America by a few heavily subsidized corporations that are getting rich by making the landscape uglier."

Carlson also asked: “How is wind power going to heat your house when it’s 30 below?”

"Wind power is a scam. It's an elaborate ripoff perpetuated by... corporations that are getting rich by making the… https://t.co/v2x1mEkNSm
— Brian Tyler Cohen (@Brian Tyler Cohen) 1549031423.0

Tucker Carlson might want to read about the subjects he talks about on television. https://t.co/c4dQwA7E7z
— Renato Mariotti (@Renato Mariotti) 1548993653.0

@renato_mariotti @ChrisCuomo The colder and windier it is, the better copper can deliver electricity to destination… https://t.co/z2z5PxjzbU
— SAVE THE DREAMERS (@SAVE THE DREAMERS) 1548997315.0

I live in the #2 wind energy state in the nation, where our largest public university is powered entirely by wind e… https://t.co/9WVAjNXb0d
— Kendally Brown (@Kendally Brown) 1548991963.0

Cold and wind happen at the same time, Tuck. We even measure their combined effects, known as wind chill.

In fact, that combination drives wind turbines that deliver energy to much of Alaska, the coldest state in the Union.

These turbines in The Last Frontier, for example, generate 24 megawatts of power.

And Scandinavian countries... where it also gets extremely cold.

@JordanUhl Oh, that @TuckerCarlson. Always going on and on about what America can't do despite other countries alre… https://t.co/wud9LujYCx
— Jess Phoenix 🌋 (@Jess Phoenix 🌋) 1548985129.0

Ignorance at its finest.

Speaking of making landscapes uglier, take a look at what coal mining looks like. This is what oil drilling does to landscapes and coral reefs. Now, compare those to a wind farm.