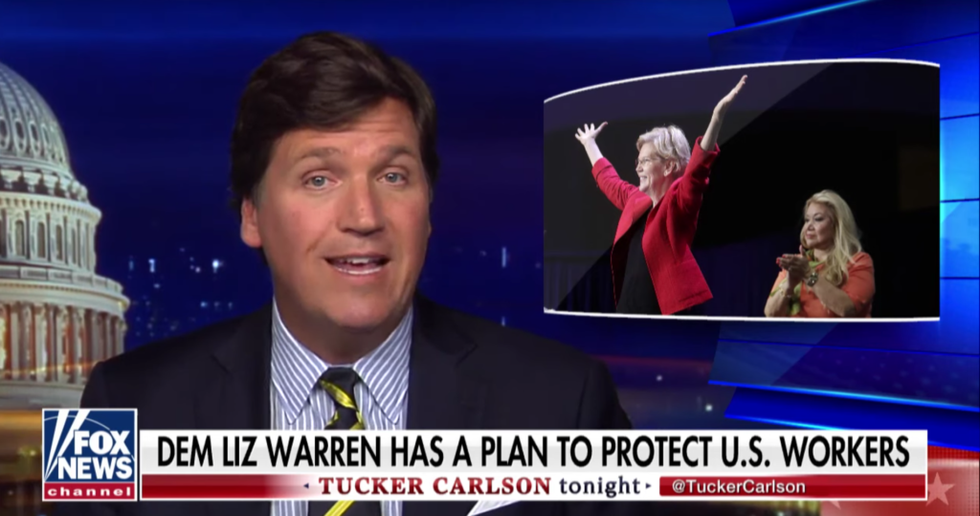 Presidential candidate and Senator Elizabeth Warren (D-MA) has been steadily rising in the polls, with many Americans drawn to the specificity of her plans as well as her tireless resolve.

It turns out she's even appealing to some in Fox News's rogues gallery of hosts, including the notorious Tucker Carlson.

Watch the entire segment below:

Carlson opened the segment by describing Warren's job creation plan, which stresses the importance of "economic patriotism." Carlson—without revealing that the plan was Senator Warren's—then asked viewers if they could find anything wrong with the plan to forge an “aggressive intervention on behalf of American workers.”

“Was there a single word that seemed wrong to you? Probably not. Here’s the depressing part: Nobody you voted for said that or would ever say. Republicans in Congress can’t promise to protect American industry.”

Then came the clencher:

"The words you just heard are from—and brace yourself here—Senator Elizabeth Warren of Massachusetts, it's true. Yesterday, Warren released what she’s calling her plan for economic patriotism. Amazingly, that’s pretty much exactly what it is: Economic patriotism.”

Carlson went on to say that Warren's proposals made "obvious sense." People were confused, considering Carlson has frequently used Native American slurs to describe Warren, as well as being in diametric opposition to social justice and public access, principles hailed by Senator Warren.

As for Warren, it's unlikely she'll find herself warming up to the network. The Senator was unequivocal in her reasoning for refusing to appear in a town hall by Fox News.

"Fox News is a hate-for-profit racket that gives a megaphone to racists and conspiracists—it’s designed to turn us against each other, risking life and death consequences, to provide cover for the corruption that’s rotting our government and hollowing out our middle class."

This Senator may have just broken Fox News.