Donald Trump Just Blamed Obama for Doing Nothing for DREAMERs. Do You Want to Tell Him or Should We?

We'll give you a minute. 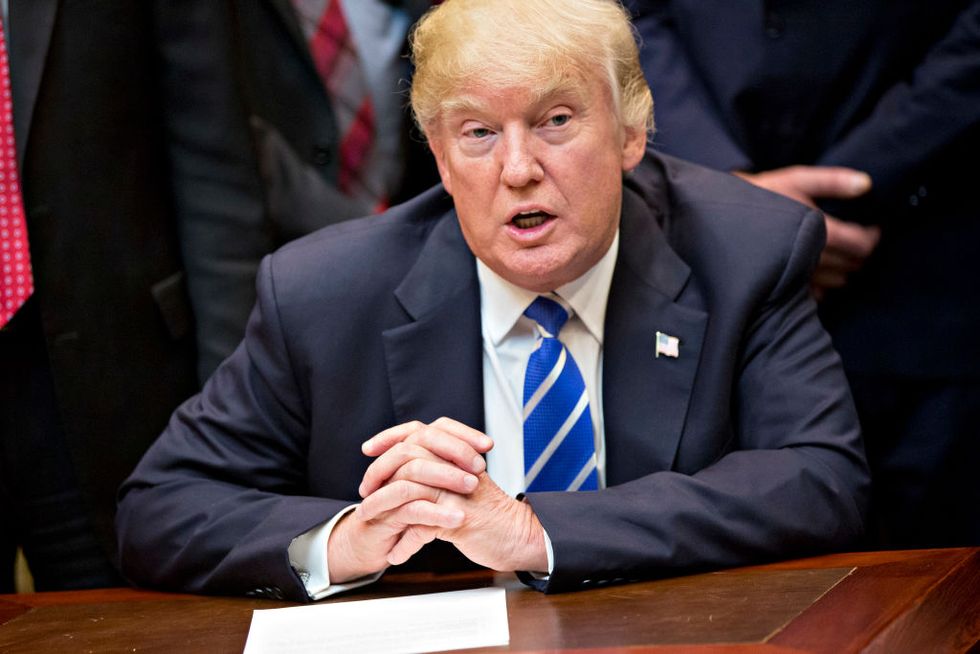 U.S. President Donald Trump during a bill signing ceremony in the Roosevelt Room of the White House that nullify measures put in place during former President Obama's administration. (Photo by Andrew Harrer-Pool/Getty Images)

At 5:46am EST, as a comment on a Tweet he made at 5:25am about the Academy Awards, President Donald Trump decided to call out former President Barack Obama and Democrats on DACA.

Ignoring the total non sequitur aspect of his comment to his own Oscars Tweet, the president's message contains a few inaccuracies. But the Twitterverse came through to correct him.

.@realDonaldTrump, we responded to you yesterday. Since YOU ended #DACA, Congress introduced at least 14 bills to… https://t.co/XVFteFBlms
— Hispanic Caucus (@Hispanic Caucus) 1520342445.0

On September 5, 2017, Trump announced the end of DACA, a program put in place by President Obama. In response to a lack of action by a Republican held congress, President Obama enacted the Deferred Action for Childhood Arrivals (DACA) as an executive order in June 2012.

President Trump appears confused by the terms DACA and DREAM. The term DACA refers specifically to President Obama's executive order, the Deferred Action for Childhood Arrivals, making Trump's repeatedly claimed inaction on "DACA" by Obama impossible. There is no DACA without action by Obama.

The beneficiaries of DACA are commonly known as DREAMers after the DREAM Act, legislation consistently blocked by congressional Republicans. The DREAM Act offered Development, Relief, and Education for Alien Minors (DREAM).

The bill addressed the future and welfare of children brought to the United States illegally, giving them a path towards citizenship or legal alien status without the threat of deportation during the sometimes years long process.

Since then numerous attempts to save DACA or institute a new program for DREAMers, some backed by both houses of Congress and both Democrats and Republicans, met opposition from Trump. Trump tied funding of his border wall to any approval of immigration reform. The wall remains unwanted and deemed unnecessary or a waste of funds by the majority of Americans and government officials alike.

Republicans still control both houses of congress making any action on DACA by Democrats impossible without their support. So Trump's claims that Obama failed to act on DACA, which was actually created by the 44th president and rescinded by the 45th, and Democrats impeding progress on saving DACA, appear to lack facts to back them up.

Luckily, Twitter came to the rescue with some facts for the president.

Obama created DACA. Trump ended it. Trump is complaining about a problem he created himself. https://t.co/o5kQkpY6go
— Renato Mariotti (@Renato Mariotti) 1520344822.0

Trump reverses decision, will now allow trophy hunters to transport body parts of elephants they have slaughtered i… https://t.co/oUdQ5uHhea
— The Daily Edge (@The Daily Edge) 1520349886.0

And it appears President Trump is not the only politician that knows how to Tweet.