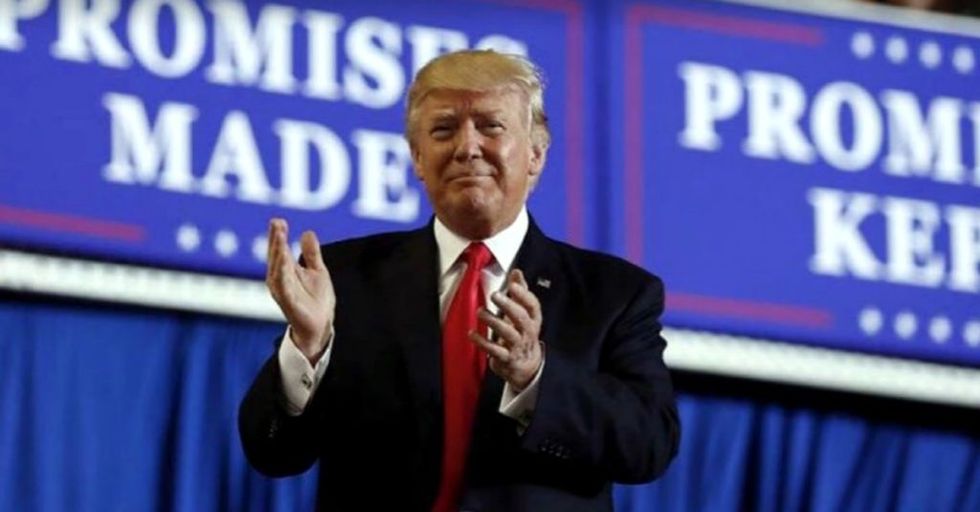 President Donald Trump takes a lot of criticism for the time he spends focused on his own popularity. On the day after his inauguration, former White House Press Secretary, Sean Spicer, stated the President's biggest concern lay with the comparatively small size of his crowd rather than the new duties Trump just assumed as a national leader.

As such, Trump often tweets about favorable poll results. On the evening after a mass shooting in Jacksonville, Florida, the President focused once again on his own public approval numbers.

There was only one problem. The number the President amplified with his tweet reflected public disapproval of the job he does, not their approval.

On Sunday evening around 8:30pm EST, Trump took to Twitter and posted:

"Over 90% approval rating for your all time favorite (I hope) President within the Republican Party and 52% overall. This despite all of the made up stories by the Fake News Media trying endlessly to make me look as bad and evil as possible. Look at the real villains please!"

But the NBC News/Wall Street Journal poll he quoted gave him a 44 percent approval rating and a 52 percent disapproval rating. After his tweet, more people went to view the poll numbers amplifying the news of the negative public opinion of the President.

The Twittersphere quickly pointed out the President's mistake. Some responded directly on Trump's own tweet.

While others thought the President should be focused on matters other than his own popularity as the following responses show.

Many mentioned the death of Senator John McCain or the shooting in Jacksonville, Florida, that claimed the lives of two people while—according to the latest updated numbers—nine others were shot and two more injured fleeing the scene.

@realDonaldTrump You are disgusting! A war veteran hero who was also our Senator just died, 2 died and 6 wounded in… https://t.co/GpjmPxNZ4e
— Donna Valente (@Donna Valente) 1535381546.0

Donald Trump is tweeting about his “approval” ratings while young people are fighting for their lives after being s… https://t.co/L3euxSSKRK
— Michael Skolnik (@Michael Skolnik) 1535339686.0

There was another mass shooting in Jacksonville. And the below tweet is what @realDonaldTrump is thinking about.… https://t.co/Kb7ZTIqSqt
— Ted Lieu (@Ted Lieu) 1535351894.0

Trump continues to chase the elusive 50 percent approval mark for his presidency. Only the conservative polling company Rasmussen Reports ever placed him at or above 50 percent.

And five of the six total times Trump garnered the approval of half or more of Rasmussen poll participants was during the first two months of his presidency. Since then he only garnered a Rasmussen 50 percent approval rating one time, in a poll from April 15-17, 2018.

Trump took to Twitter to tout the good news. The same Rasmussen poll gave him a 49 percent disapproval rating however.

The news organization RealClearPolitics keeps running records of poll numbers. The last few weeks show Trump with an approval rating between 41 to 46 percent. His disapproval sat between 51 and 54 percent.

Their analysis of the polls since his inauguration shows a recent steady trend for Trump in his approval ratings for several months now. The black line is the President's approval rating while the red is his disapproval.

Heading into the midterm elections with a President that over 50 percent disapprove of worries some in the GOP. Several prominent Republican incumbents took a quieter campaign approach leading into the November elections, hoping to retain their seat only through name recognition as the incumbent.

Elections are slated for Tuesday, November 6, 2018.