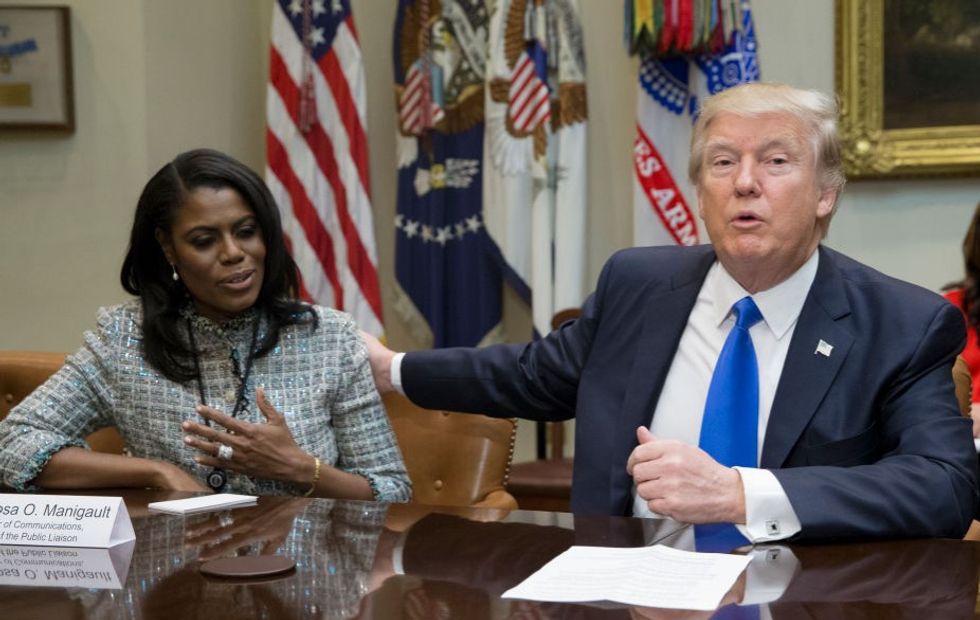 President Donald Trump holds an African American History Month listening session with Director of Communications for the Office of Public Liaison Omarosa Manigault and other officials in the Roosevelt Room of the White House on February 1, 2017 in Washington, DC. (Photo by Michael Reynolds - Pool/Getty Images)

The woman known mainly by her first name—Omarosa—went from self-described reality TV actress to White House staffer, all alongside Donald Trump. She adds tell-all author to her resume on August 14, 2018, when her expose' on working in the Trump White House—titled Unhinged— comes out.

But Omarosa is not just another former White House official making claims that the Trump administration can dismiss as fake news.

Turns out, Omarosa has the recordings to back her stories up and no, they are not illegal. Washington DC—like New York where Michael Cohen recorded Trump—falls under a one-party consent law

The Daily Beast broke the story of the recordings on Wednesday.

EXCLUSIVE: Omarosa secretly recorded conversations with Trump while working in The White House, and she has played… https://t.co/cfxT0eZWUR
— The Daily Beast (@The Daily Beast) 1533757450.0

While no tweet from President Trump addressing the recordings or Omarosa's book exists yet, people quickly found a 2013 Twitter post that then-reality TV performer Trump made about her, that he may want to take back after today's news:

@Bencjacobs @SoSofieFatale There really is a Trump tweet for everything. He’s like Nostradamus for his own political downfall.
— Georgia (@Georgia) 1533771989.0

Omarosa Manigault-Newman first came to public attention in 2004 after appearing on the first season of NBC's reality television series, The Apprentice, starring Donald Trump. But that was only the beginning of their relationship.

The two teamed up again in 2008 and 2013 on the more popular The Celebrity Apprentice.

In 2015, Trump refers to her as a loyal friend in reference to a television appearance she made early in the 2016 presidential campaign.

During the Republican National Convention in July 2016, Omarosa announced her role as Director of African-American Outreach for Donald Trump's presidential campaign. After the election she joined Vice President Mike Pence's transition team and later joined the White House staff as the Director of Communications for the Office of Public Liaison.

Back in 2013, Trump said he would always like Omarosa because "she constantly defends me."

But on December 13, 2017, the White House announced the resignation of Omarosa, effective January 20, 2018. The President took to Twitter to wish her well.

As everyone expected, she shortly thereafter made her book deal announcement. Back in 2013, Trump asked the public to decide if Omarosa was "Nasty, tough or smart...or all?"

The Twittersphere enjoyed taking a poke at the President's assessment of Omarosa's honesty and loyalty. And the existence of the tapes.

@thedailybeast @Boatoptional2 For the guy who is so careful about NOT being recorded, a lot of people have him on tape.
— slappysquirrel (@slappysquirrel) 1533758611.0

As well as predicting the eventual Trump Twitter response.