Twitter User Inserts Donald Trump's Speakerphone Fail With the President of Mexico Into the Closing Credits of 'Veep', and It's Perfect

It works almost too well. 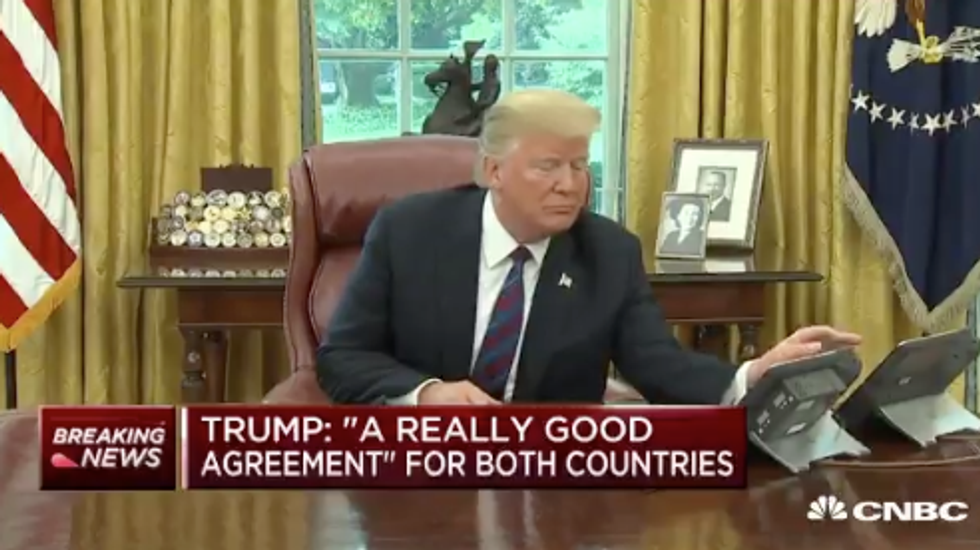 During a Monday afternoon Oval Office press event to announce a new trade deal with Mexico, Donald Trump had some major difficulties getting Mexican President Enrique Peña Nieto on his speakerphone.

Trump and Nieto have reportedly agreed to changes to NAFTA, which Trump has derided as being disadvantageous to the United States.

According to CNN, the biggest items agreed upon by the United States and Mexico are as follows:

Trump added that the NAFTA monicker will be dropped from the newly negotiated trade deal.

But the details of the deal were overshadowed by the speakerphone fail, which is now going viral for an entirely different reason: a Twitter hero has set it to the closing credits theme song of HBO's Veep.

And it works well...almost too well:

@arlenparsa @VeepHBO This is literally the only time I have happily listened to @realDonaldTrump And I laughed so hard. Thank you.
— Sandra Beggs (@Sandra Beggs) 1535397936.0

Twitter thinks we're living in an episode of Veep.

Is the season over yet?

What is Trump even doing?

Parsa also synced the Trump footage with the music from Curb Your Enthusiasm, and it too is scary perfect.