His message was received, loud and clear. 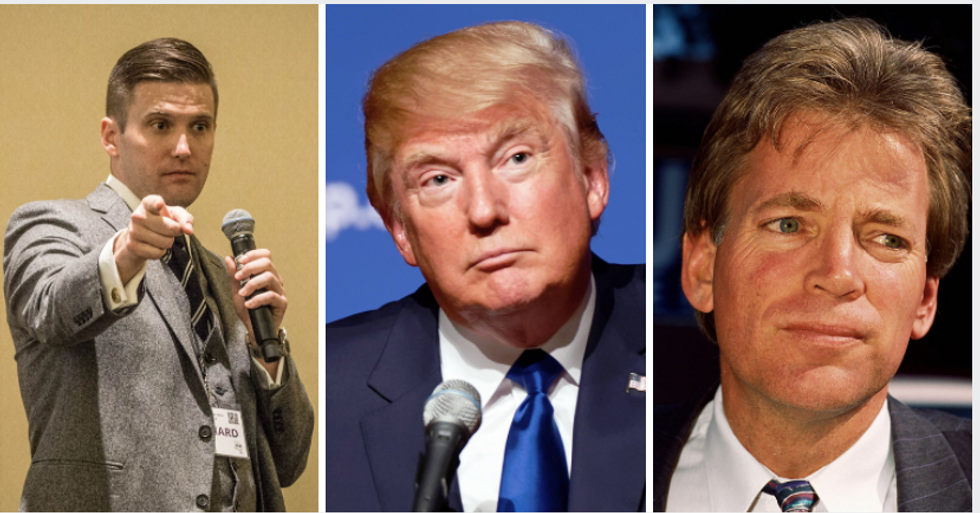 One passage from President Donald Trump's first State of the Union address to Congress and the U.S. drew praise from white supremacists.

“My duty, and the sacred duty of every elected official in this chamber is to defend Americans––to protect their safety, their families, their communities, and their right to the American Dream,” Trump said during his speech last night. "Because Americans are dreamers, too.”

Critics seized on the line, accosting the president for drawing a sharp line between DREAMers (undocumented immigrants who were brought to the U.S. by their parents as children) and those born in this country. They say the president's tone-deafness comes at a time when the hot-button issue of immigration reform has split Democrats and Republicans along party lines and caused marginalized persons to feel threatened by the political climate.

Noted white nationalist Richard Spencer, the president of the National Policy Institute, a white supremacist think tank, and the man credited with coining the term "alt-right," thought otherwise. He tweeted the quote to his followers, along with his ideal image of an American family.

Spencer also highlighted another quote from the president's speech, in which he spoke about his desire to preserve the "nuclear family" by ending chain migration.

Writing for The Daily Beast, David Litt, who was a speechwriter for former President Barack Obama, said the president's address was "a white nationalist wish list," and noted that the section of the speech which addressed immigration policy––a "favorite subject" of Trump's speechwriter Stephen Miller––was the only part which articulated "an actual, fleshed-out policy position":

In exchange for giving 1.8 million people brought here as children a chance to become citizens, Trump’s proposed bill would slash legal immigration by 50 percent. That’s a position that would have been shockingly radical not so long ago—but Miller’s former bosses such as Michelle Bachman and Jeff Sessions would have been more than comfortable with it.

This is far from the first time that the president has been accused of courting white nationalists.

Spencer's support for the president has never wavered, and he gained significant notoriety last summer for his highly charged and divisive rhetoric last summer as one of the featured speakers at the "Unite the Right" rally in Charlottesville, Virginia. It was there where violence erupted when activist Heather Heyer was killed after she was struck by a Dodge Challenger driven by James Alex Fields, who had traveled to the city from Ohio to protest at the rally with fellow white nationalists.

Republican and Democrat lawmakers alike slammed the president after he spread the blame for the violence.

Trump's continued association with nationalists and hard-right populists led by Stephen Bannon, his former chief strategist, has continued to draw criticism. He also refused to disavow David Duke for many months after Duke endorsed him for the presidency during 2016's election cycle. He eventually did, telling NBC's "Morning Joe" in March 2017 that Duke "is a bad person, who I disavowed on numerous occasions over the years."

Duke never relinquished his support, and was one of Trump's most vocal well-wishers following November's election.