Trump Scuffle with Scarborough and Brzezinski Escalates to Personal Threats 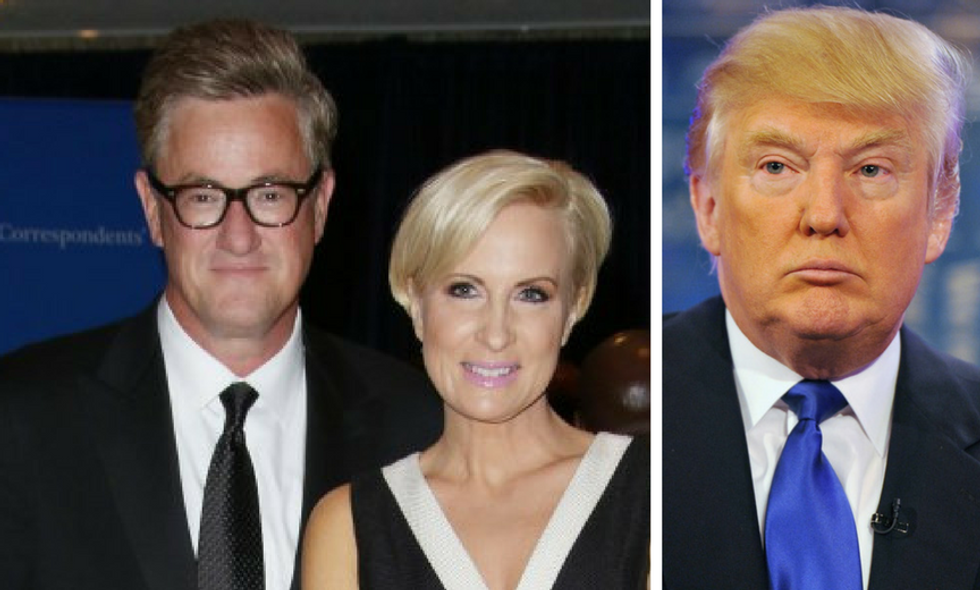 The controversy over Donald Trump's offensive tweets attacking Morning Joe's Mika Brzezinski and Joe Scarborough has escalated as Scarborough and Brzezinski hit back with claims of threats from the White House.

Yesterday Trump lashed out at the couple on Twitter:

This morning, Scarborough and Brzezinski penned a Washington Post OpEd titled "Donald Trump Is Not Well" in which they brush off the attack but question the President's fitness for office, revealing threats they received from the White House:

This year, top White House staff members warned that the National Enquirer was planning to publish a negative article about us unless we begged the president to have the story spiked. We ignored their desperate pleas.

"We got a call that, 'Hey, the National Enquirer is going to run a negative story against you guys...' And they said, 'If you call the president up, and you apologize for your coverage, then he will pick up the phone and basically spike this story...The calls kept coming and kept coming, and they were like 'Call. You need to call. Please call. Come on, Joe. Just pick up the phone and call him.'"

Trump took to Twitter to deny it. Scarborough returned fire, calling the President a liar.

Yet another lie. I have texts from your top aides and phone records. Also, those records show I haven't spoken with… https://t.co/7BdZ6CrD7C
— Joe Scarborough (@Joe Scarborough) 1498827740.0

The National Enquirer stands by the piece it ran in June about Scarborough and Brzezinski's relationship and their past marriages, but denies engaging in any threats.

Sean Spicer said only that he was "unaware" of the White House issuing any such threats to the couple.