Donald Trump Is Now Apparently Aware of How Badly Republicans Did in the Midterm Elections, and He's Really Not Handling It All That Well 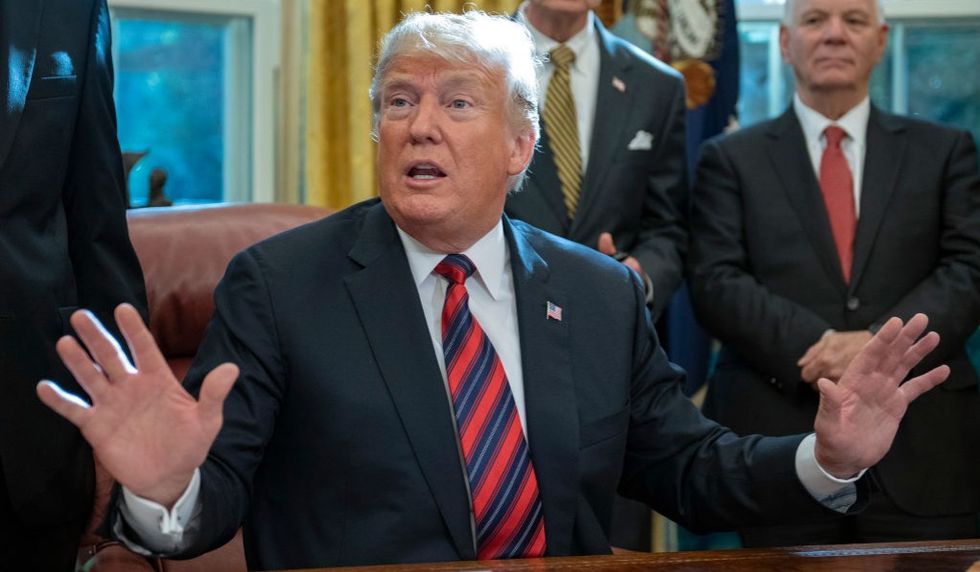 U.S. President Donald Trump speaks to the press pool in the Oval Office of the White House on October 23, 2018 in Washington, DC. (Photo by Ron Sachs - Pool/Getty Images)

On the evening of last week's elections, President Donald Trump declared the 2018 midterms a big success for himself and his fellow Republicans, despite the fact that Democrats took back the House of Representatives.

He continued that narrative for the next day.

Received so many Congratulations from so many on our Big Victory last night, including from foreign nations (friend… https://t.co/7lZw3mapFD
— Donald J. Trump (@Donald J. Trump) 1541589711.0

To any of the pundits or talking heads that do not give us proper credit for this great Midterm Election, just reme… https://t.co/uwYmi2ULbt
— Donald J. Trump (@Donald J. Trump) 1541595159.0

However as final results came in, and Democrats picked up more seats than originally projected, Trump's Twitter feed went on the attack.

President Macron of France has just suggested that Europe build its own military in order to protect itself from th… https://t.co/ZlE52iViPz
— Donald J. Trump (@Donald J. Trump) 1541797846.0

There is no reason for these massive, deadly and costly forest fires in California except that forest management is… https://t.co/k5gzPlaT4E
— Donald J. Trump (@Donald J. Trump) 1541837332.0

According to White House staff and members of the diplomatic corps for the US and allies, Trump went on the attack in person as well.

British Prime Minister Theresa May was one of the first allies to receive a dose of the President's temper after the actual results of the midterm elections began to be seen by Trump and the world. In a call on board Air Force One, Trump reportedly berated May after she called to congratulate him on the 2018 midterms.

After declaring the midterms a success, the President was confronted with the fact the GOP barely held on to the Senate. Trump may still see a gain of a Republican seat or two, depending on a recount vote in the Florida race between Republican Rick Scott with Democrat incumbent Senator Bill Nelson and the outcome of a run-off in Mississippi.

So far, Democrats appear to have picked up 33 seats in the House of Representatives with 9 races still undecided as of Wednesday morning. Many of the new Dem seats went to women and minorities.

Trump's track record with both groups is less than favorable.

In light of the real results of the midterm elections, sources at the White House expect major staff changes. One change already made was the forced resignation of Attorney General Jeff Sessions the day after the 2018 midterms.

But the President received harsh criticism and pushback on his choice of interim replacement, Matthew Whitaker, adding to his current woes. Then during a trip to France to commemorate the 100th anniversary of the end of WWI, Trump took several missteps leading to further criticism and rebuke on the world stage.

According to one senior White House official:

"He was frustrated with the trip. And he’s itching to make some changes. This is a week where things could get really dicey."

Staff members described the President as sulky, brooding, angry and resentful during the 43 hours spent in France. The time included several outbursts directed at his staff over Trump's decision to skip portions of the official international ceremonies due to weather.

On Twitter, Trump first attempted to blame the Secret Service for his failure to attend one key ceremony.

The White House later walked back the claim.

Trump also sparred with French President Emmanuel Macron with many in the United States declaring Macron the winner after his speech against nationalism, calling it the opposite of patriotism.

According to White House sources, Trump viewed the speech as a personal attack.

Many others saw it the same way.

"He’s just a bull carrying his own china shop with him when­ever he travels the world."

Back home, Trump spoke of ousting Department of Homeland Security Secretary Kirstjen Nielsen and Chief of Staff John Kelly. But a White House official said the threats are common and not taken seriously until Twitter gets involved.

"But he’s done this three or four times before. Nothing is ever real until he sends the tweet."

Those observing the President often claim he is a narcissist. His reaction to the GOP losses in the midterm elections and anything but effusive praise from the press and foreign leaders support those claims.

According to psychiatric and psychological resources, the “hallmarks of Narcissistic Personality Disorder (NPD) are grandiosity, a lack of empathy for other people, and a need for admiration.”

"People with this condition are frequently described as arrogant, self-centered, manipulative, and demanding. They may also concentrate on grandiose fantasies (e.g. their own success, beauty, brilliance) and may be convinced that they deserve special treatment."

A person with NPD will blame others for all failures while taking credit for all successes. While only a clinician could properly diagnose any personality disorders in the President, his behavior after criticism and loss certainly fits the profile of a narcissist.