Donald Trump Is Basically His Own Chief of Staff Now 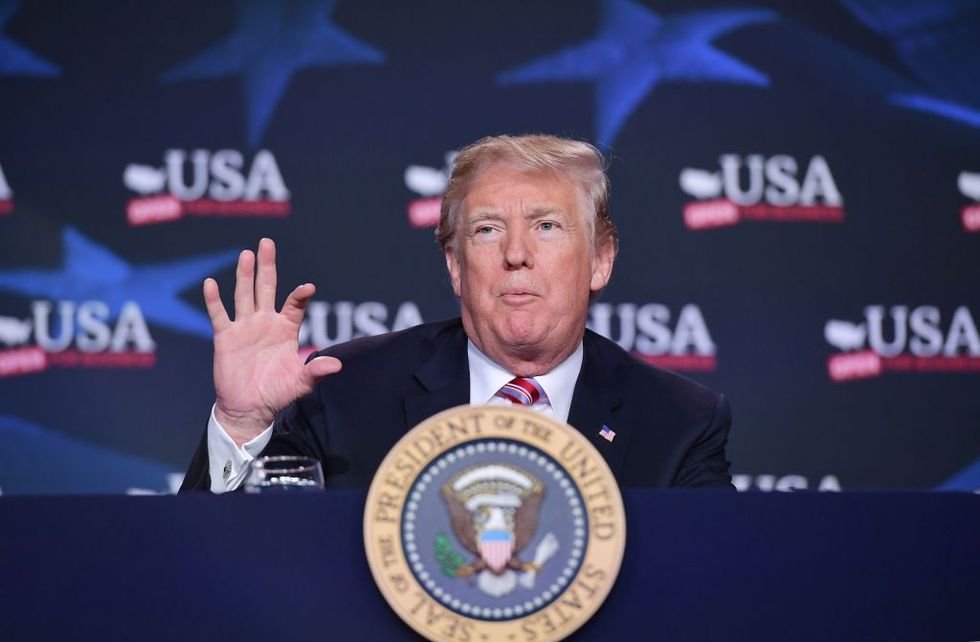 President Donald Trump has reportedly been using his personal cellphone more frequently to talk with outside advisers, according to multiple sources inside and outside the White House who spoke to CNN.

"He uses it a lot more often more recently," a senior White House official said of the president's cell phone use.

The anonymous sources say they see Trump's return to a more free-wheeling style as an indicator of Chief of Staff John Kelly's waning influence over his daily activities. According to the report:

During the early days of Kelly's tenure, multiple sources said, Trump made many of his calls from the White House switchboard -- a tactic that allowed the chief of staff to receive a printed list of who Trump had phoned. Kelly has less insight into who Trump calls on his personal cell phone.

Trump never entirely gave up his personal cell phone after entering the office, says one senior White House official who speculated that Trump is using his own phone much more often in part because "he doesn't want Kelly to know who he's talking to." Trump, the source added, "is talking to all sorts of people on it," noting that he has recently received more private calls than usual.

Three sources familiar with Trump's phone habits say he's acting more like his own Chief of Staff and has used his personal phone as a means to "direct outreach to GOP lawmakers over the past several weeks."

"Kelly used to be more clearly the gatekeeper than he is now from a Hill standpoint,” one source told the media outlet. “I don’t know that [Trump] is even running it by the chief of staff anymore.”

"Basically, at this point, he's just sort of engaging on his own," said the second source.

The third observed that the president's habits are yet another example of his tendency to ignore the once established norms of the highest office in the nation. "Definitely, the walls are breaking," the source said.

Another individual close to the White House noted that "a lot of meetings, a lot of things have happened lately without Kelly being in the room."

Kelly's diminishing influence has also allowed Trump's former campaign manager, Corey Lewandowski to enjoy "unfettered" access to the president, according to multiple sources who said that they heard Lewandowski bragging to his friends. Kelly attempted to limit Lewandowski's access to the president, but to no avail. The president's decision to make Larry Kudlow, his economic adviser, and John Bolton, his national security adviser, "direct reports" to him and not to Kelly has only complicated matters further. Their predecessors, CNN notes, "reported directly to the chief of staff or at least looped Kelly in after a meeting with the President -- a potential sign of Trump's shift toward controlling more of what goes on in his own White House."

At least one senior White House official said the president's actions are an indicator of the "balance" he and Kelly have struck between them.

"They've grown into some level of comfort," the official said. "There used to be a level of babysitting, and it wasn't organized." The official added that Kelly "spent months" tending to the operational process and that now he doesn't need to weigh in on as many issues.

But the president's decision to use his personal cell phone is not without its security concerns.

According to Mary McCord, who used to head the Justice Department's national security division, smartphones come with a host of security vulnerabilities:

These concerns were echoed by Bryan Cunningham, executive director of the Cybersecurity Policy and Research Institute at the University of California-Irvine:

All communications devices of all senior government officials are targeted by foreign governments. This is not new. What is new in the cell phone age is the ease of intercepting them and that at least our last two presidents ... have chafed at not being able to use their personal cell phones. Of course, calls are only secure if both parties use a secure device... [Trump's conversations may not be] captured for the purposes of government accountability and history.

Kyle Griffin, the producer of MSNBC's The Last Word, also weighed in, sharing an NPR report from last year which cites numerous sources that confirmed Trump still used his old and unsecured Android device even after entering the office.

On the news that Trump is reportedly using his personal cell phone more, I can't help but think of this quote from… https://t.co/xWBhXloCCz
— Kyle Griffin (@Kyle Griffin) 1524537023.0

NPR reached out to the White House with the following questions:

The White House chose not to comment. At the time, Deputy White House Press Secretary Stephanie Grisham would only say, "We don't comment on security protocols of any kind."

Others also offered their opinions; it was not lost on them that the president's propensity for using unsecured devices contradicts criticisms he directed toward Hillary Clinton over her use of a private email server while serving as Secretary of State.

Commenting on the relationship between Trump and John Kelly, CNN's Dana Bash said that “like a teenager” Trump has taken to sneaking phone calls under his Chief of Staff's nose:

Look, this is classic Donald Trump in that it’s his life line to talk to the people outside the White House... For any president it’s quite difficult to be in the bubble of the White House,” Bash said. “But in this particular case, the idea that like a teenager, he has to sneak a cell phone when the people who are sort of watching over him aren’t there or around—or the person in this case—the chief of staff, it’s pretty extraordinary.