Donald Trump Just Explained Why He Really Declared a National Emergency at the Border, and, Yeah, Good Luck Defending That In Court

He just admitted it. 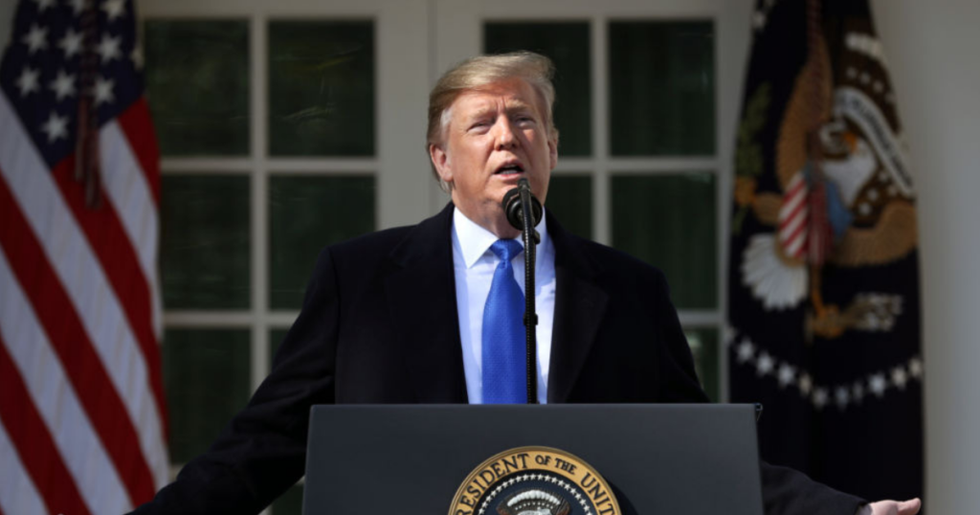 President Donald Trump has declared a national emergency to access billions of dollars to construct a wall at the U.S.-Mexico border after Congress denied his requests for funding. The declaration has ignited a dispute about separation of powers, and the president's reasoning is likely to face legal challenges.

"I could do the wall over a longer period of time," he told NBC's Peter Alexander when asked about his prior statements on the merits of executive orders, which he had long accused former President Barack Obama of using to circumvent the decisions of Congress. "I didn't need to do this, but I'd rather do it much faster."

Many took the president's statement as further evidence that he is seeking to bypass Congress to fulfill a campaign promise he made to his base.

Trump is declaring a national emergency to bypass Congress, to build a wall we don’t need, to address a crisis that… https://t.co/rvG77tSdru
— Adam Schiff (@Adam Schiff) 1550187041.0

House Speaker Nancy Pelosi said the declaration is "a desperate attempt to distract from the fact" that the president "broke his core promise to have Mexico pay for his wall."

Declaring a national emergency would be a lawless act, a gross abuse of the power of the presidency and a desperate… https://t.co/CO7L94HvKf
— Nancy Pelosi (@Nancy Pelosi) 1550181183.0

Senator Jeff Merkley (D-OR) pointed out that the law only allows the use of a national emergency when there's a declaration of war or when there's an emergency "requiring the use of armed forces," neither of which apply to the current state of affairs.

"The American people will see you in court," he said.

Senate Minority Leader also highlighted the president's admission that he "didn't need to do this," commenting: "Mr. President, how can this possibly be a national emergency if you're saying you didn't need to do it?"

Representative Alexandria Ocasio-Cortez said the same, accusing the president of "faking a crisis."

If you were to ask the president, however, you'd find he's rather unfazed by these criticisms. Speaking at the news conference, he outlined what would happen next:

The declaration of a national emergency is the culmination of a long fight over funding for the president's pet project. This resulted in a government shutdown that kicked off in December 2018 after he declined to sign a stopgap funding bill because he disagreed with Congress's decision not to provide the requested funding for his proposed border wall. As the shutdown wore on, he insisted that it was simply a ploy by Democrats to cost him re-election.

The declaration is necessary, the president said, to cull the flow of drugs, gang members, and illegal immigrants he says are coming over the border. (All available data says otherwise.)

“We’re going to confront the national security crisis on our southern border and we’re going to do it one way or the other,” he said. “It’s an invasion,” he added. “We have an invasion of drugs and criminals coming into our country.”

Trump announces he's "signing a national emergency," but argues it's not really a big deal because other presidents… https://t.co/TC0rBpMr2N
— Aaron Rupar (@Aaron Rupar) 1550245994.0

The news that Trump would declare a national emergency was first confirmed to reporters by Senate Majority Leader Mitch McConnell, who said Trump would sign the measure to avoid another government shutdown.

Although McConnell urged Trump not to invoke his emergency powers, he is standing by his decision anyway, a decision that did not escape the ire of conservative pundit Ann Coulter, who noted that declaring a national emergency would do nothing and that Republicans, whom she accused of "selling out their constituents," just need to pass a bipartisan spending bill with a veto-proof majority.

Senator Chuck Grassley (R-IA) was similarly criticized yesterday after he, speaking from the dais after the Senate’s official morning prayer to open Senate business, asked his colleagues to "pray that the president will have wisdom to sign the bill so government doesn’t shut down."

Although the prior shutdown ended when president eventually capitulated to the original demands laid out by the Democratic Party, he ended up costing the economy more money (roughly $11 billion, with at least $3 billion being a permanent loss) than he’d requested ($5.7 billion) to build the border wall in the first place.