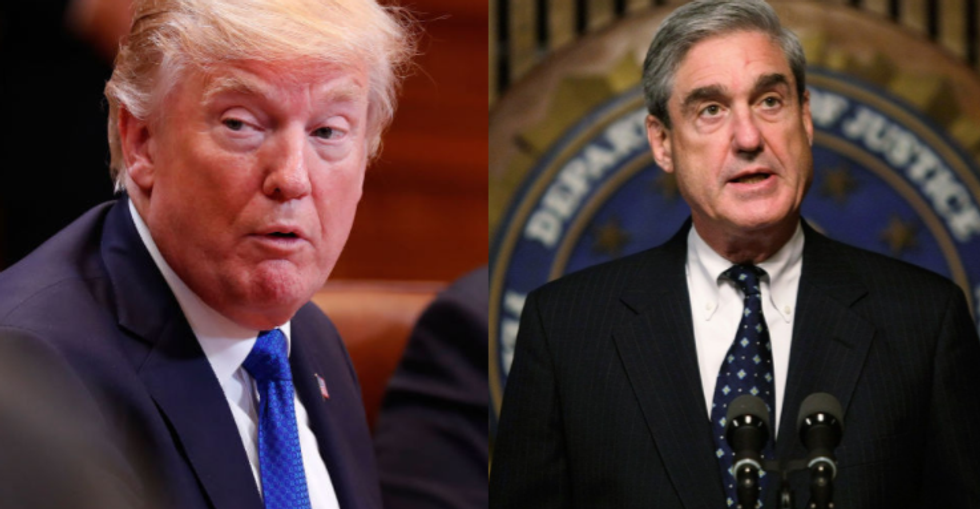 President Donald Trump's attorney Rudy Giuliani told Bloomberg News that Trump will only answer questions from special counsel Robert Mueller that are about possible collusion between his election campaign and Russia and so long as Trump is not asked any questions about obstruction of justice. The reason: Because it could lead him to be charged with perjury if Mueller believes the versions of events presented by other witnesses.

The president's legal team made their offer in a proposal submitted to Mueller. Giuliani says Mueller has not yet responded to the proposal.

Naturally, the proposal has come under significant scrutiny, with many wondering what the president––who has often denigrated Mueller's investigation as a mere "witch hunt"––could be hiding.

Nothing wrong? The reason why Robert Mueller what's the interview is to get to the bottom of the Collision but Dona… https://t.co/3psvOEHwcT
— Dwayne Dunaway (@Dwayne Dunaway) 1532439014.0

Trump has previously said that he would be willing to talk with the special counsel and, in an interview with CBS last week, he said just that.

When asked about whether the chances he'd sit for an interview with Mueller are better or worse than they were last year, Trump responded: “My lawyers are working on that. I’ve always wanted to do an interview, because, look, there’s been no collusion. There’s been no talk of Russia."

Giuliani, however, has said the opposite. Earlier this month, he said a sitdown between Trump and Mueller is "probably further away than before."

"You're a lawyer, would you walk your client into a kangaroo court with guys who donated $36,000 to his opponent, cried at her loss party, represented the scoundrel who broke the hard drive?" Giuliani asked Fox host Laura Ingraham in response to FBI counterintelligence agent Peter Strzok's testimony before a joint House Judiciary and House Oversight and Government Reform Committee hearing.

Giuliani added, in reference to Strzok:

If you have an objective group of people that you could persuade, of course you would consider testifying. But if you have people that are like him ... they never unraveled the taint that he created.

Giuliani insisted that Democrats' willingness to defend Strozk indicated that Mueller's investigation "is falling apart of its own weight."

A week before the Fox News interview, Giuliani said that Trump will only agree to an interview with Mueller's team if the special counsel provides evidence that Trump has committed a crime and proves that the probe cannot be completed without Trump's testimony.

"If they can come to us and show us the basis and that it’s legitimate and that they have uncovered something, we can go from there and assess their objectivity,” Giuliani told New York Times reporters.

Legal experts have long opined that Mueller could indict Trump for obstruction of justice, a historic first for a sitting president. They've also predicted that a case against the president would likely move to the Supreme Court because there is no legal precedent for an indictment of a president.

The 2000 opinion concluded that the indictment or criminal prosecution of a sitting president “would unconstitutionally undermine the capacity of the executive branch to perform its constitutionally assigned functions.”

The memo was written by an assistant attorney general nearly two years after the House impeached President Bill Clinton for lying under oath and obstructing justice about his affair with White House intern Monica Lewinsky.

Independent counsel Kenneth Starr never tried to indict Clinton. But Starr, who filed a damning report to Congress in 1998, considered the option — and even tasked his lawyers with preparing draft indictments, as well as a legal opinion asserting his power to charge Clinton.

The 1973 Justice Department memo was used toshield President Richard Nixon from a possible indictment by Watergate prosecutors, who believed they had the power to bring one. That debate was unresolved after the special prosecutor decided to share his work with the House Judiciary Committee, which was preparing to launch impeachment proceedings against Nixon.

According to Kenneth Starr’s legal adviser, Ronald Rotunda, Mueller cannot indict Trump because Starr’s powers were defined by an independent counsel statute that expired in 1999. As such, Mueller has the powers of a U.S. attorney and would be bound by all Justice Department “rules, regulations, procedures, practices and policies,” including both the 1973 and 2000 DOJ memos.

Republicans have warned that an indictment against a sitting president would spark a constitutional crisis, and signs that Mueller is closing in have persisted for months.

Shortly afterward, Trump’s former national security adviser, Michael Flynn, pled guilty to lying about conversations he’d had with Sergey Kislyak, the former Russian ambassador. Mueller’s team charged Flynn with “willfully and knowingly” making “false, fictitious and fraudulent statements” regarding those conversations. Flynn’s plea indicates what outlets had reported for some time: That he is cooperating with the special counsel’s investigation.