Donald Trump Just Caved to Pressure to Honor John McCain Appropriately, but Twitter Isn't Having It 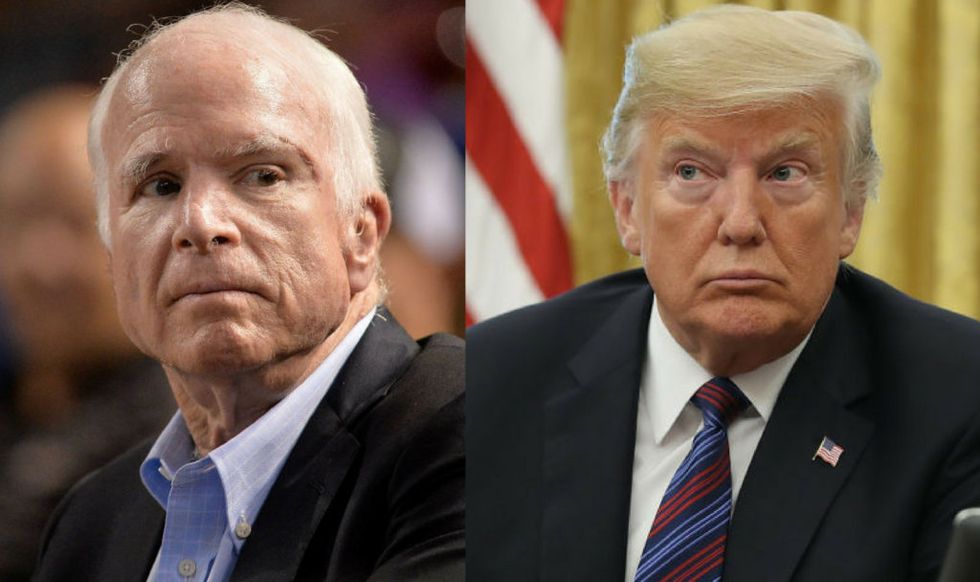 The White House had lowered the flag on Sunday night before raising it again on Monday. The flag will now remain at half-staff until the day of McCain's interment—the customary procedure for those of McCain's stature. The White House released the proclamation this afternoon.

The president also released his first statement outside of a tweet addressing the character and service of John McCain, saying

Despite our differences in politics and policy, I respect Senator John McCain's service to our country and, in his honor, have signed a proclamation to fly the flag at half-staff until the day of his interment.

The president's initial remarks were relayed via Twitter and addressed to McCain's family.

For many, however, the move of lowering the flag now is too little, too late.

@Acosta @Megresistor The US Flags are at #HalfStaff as they should've been. It shouldn't take national pressure for… https://t.co/uMXSEDHhjq
— Lisa Lamb (@Lisa Lamb) 1535403724.0

The president's ire for John McCain has been longstanding, originally gaining infamy with comments from Trump that McCain, who spent nearly six years as a prisoner of war, was "not a war hero" because he was captured.

As recently as four days before the senator's death, the president, while speaking at a rally in West Virginia, appeared to imply that McCain was unreliable:

McCain famously shattered the president's hope of fulfilling a pillar of his 2016 campaign: the repeal of Obamacare. In a tie-breaking vote, McCain broke with many in his party to maintain Obamacare until an adequate replacement plan could be reached.

McCain, whom to many represented an era of decency in American politics widely feared to be waning, was never afraid to stand up to the president.

One of these instances was following Trump's disastrous press conference with Russian President Vladimir Putin.

After Trump sided with Putin over his own intelligence agencies as to whether Russia attempted to influence the 2016 election, McCain accused the president of abasing himself "abjectly before a tyrant."

Today’s press conference in Helsinki was one of the most disgraceful performances by an American president in memory. The damage inflicted by President Trump’s naiveté, egotism, false equivalence, and sympathy for autocrats is difficult to calculate. But it is clear that the summit in Helsinki was a tragic mistake.

Even before Trump's election, McCain accused him of "firing up the crazies" with his belligerent stances on immigration.

If Twitter is any indication, it appears one of McCain's lasting legacies will be his moral superiority to the current president.

I am proud to be a 25 year member of the American Legion, thank you National Commander Denise Rohan for standing up… https://t.co/7R7rchtdVc
— Lee Sweetapple (@Lee Sweetapple) 1535404954.0

While McCain has left this earth, his spirit will be remembered warmly by many. However, with acts of pettiness like this, the same may not be said of Trump.