Donald Trump Jr. Doctored a Graphic of His Father's Approval Rating, and The Internet Let Him Have It

You're not fooling anyone, Jr. 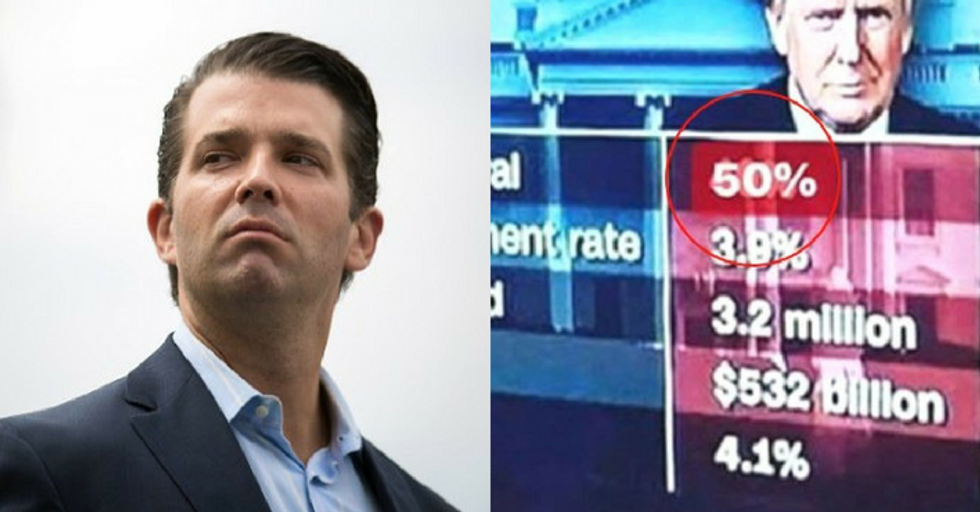 In his caption, the younger Trump stated:

Amazing. I guess there is a magic wand to make things happen and @realdonaldtrump seems to have it. #maga #americafirst"

Whoever altered the original CNN screen grab left the "50%" misaligned with the text on the original graphic. Also, the background shade of red was drastically different.

@Matt_Kiser @currentstatus So wait, let me get this straight. Polls are fake until they show positive numbers for T… https://t.co/7SL6wyxNr5
— Brandon Bilinski (@Brandon Bilinski) 1533934717.0

After zooming in, people also clearly saw the original "40%" was still visible under the fake number. It didn't take long for the internet to pick up on the error of Trump Jr.'s ways.

@realDonaldTrump @DonaldJTrumpJr #Fakepresident s son makes up #fake poll. #LiarInChief As a father he has taught… https://t.co/PompfC6EvA
— I am Deborah Allen (@I am Deborah Allen) 1533934534.0

A few went to Trump Sr. to ask about the graphic his son shared.

@realDonaldTrump I see that your "wonderful son" is as much of a GD liar as you, distributing a fake poll results g… https://t.co/tkp9lADzAj
— SmorrisonF (@SmorrisonF) 1533915884.0

While some theorized on the real reason behind the fake image.

Some found irony in Trump Jr.'s magic wand comment since it is one of the photoshop tools used when altering images.

The magic wand from Photoshop. (Photoshop)

While others offered their own fake poll numbers.

Although it appears not everyone got the memo as Nevada Republican State Senate Leader and candidate for Nevada Lieutenant Governor Michael Roberson shared the clearly altered image Friday morning, well after the public called it out as fake.

Ironically, he captioned the image "Facts are stubborn things."

After the public notified Roberson, rather than admit his mistake and delete the post, he claimed he was owning Libs with a badly photoshopped image.

Love the apoplectic comments below. I just polled my own household and Trump is at 50%, so the graphic stays. Libs… https://t.co/QVsRSNScuq
— Michael Roberson (@Michael Roberson) 1533931080.0

Twitter user Alex Kaplan broke the whole thing down in the following series of tweets.

After Trump Jr. deleted his Instagram post, Kaplan noted the Facebook posts of the same image had been turned into memes with the same numbers, but no basis in reality.

It appears that the photoshopped image has now been turned into a meme (text in the meme seems to match what was in… https://t.co/oF9xJdLavk
— Alex Kaplan (@Alex Kaplan) 1533908259.0

Trump Jr. did not respond to any media inquiries about the graphic before or after deleting it from Instagram. It is unclear where he got the image, but he retweeted a similar claim from Twitter user Paul Joseph Watson making a 50 percent approval rating claim.