Keeping it classy as always. 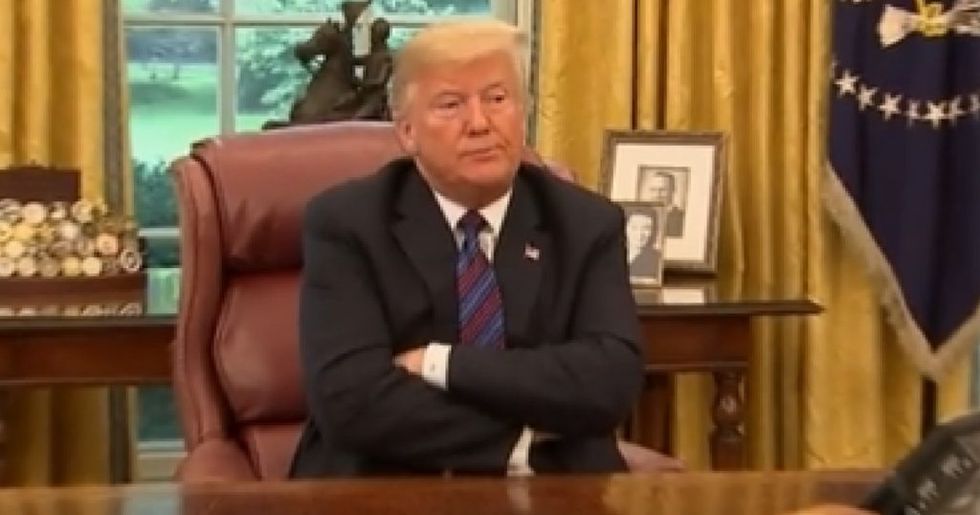 President Donald Trump ignored questions from reporters repeatedly on Monday about Senator John McCain (R-AZ), who died on Saturday at the age of 81.

Major news outlets documented the president's crass behavior on Twitter after Trump refused to address McCain's death during a meeting with Kenyan President Uhuru Kenyatta in the Oval Office.

WATCH: President Trump declines to comment when asked multiple times in the Oval Office for his thoughts on the dea… https://t.co/K9GqQKNh6n
— NBC News (@NBC News) 1535388525.0

CBS News White House correspondent Mark Knoller tweeted a picture of Trump sitting at the Resolute Desk with his arms crossed, which was fittingly symbolic of the president's dismissal of the press.

Pres Trump declined to answer questions at the end of the announcement. Was asked to reflect on the legacy of Sen.… https://t.co/zDslz3ke7X
— Mark Knoller (@Mark Knoller) 1535386512.0

Knoller later added that Trump also ignored his requests for comments in the Rose Garden, while the First Lady seemed to enjoy the spectacle. "Mrs. Trump smiled at the sight of reporters shouting questions," Knoller said, "as WH aides herded them out of the room."

Again at the Rose Garden and in the Oval Office, Pres Trump again declined to respond to questions about his though… https://t.co/4msVed44Hu
— Mark Knoller (@Mark Knoller) 1535393850.0

ABC's Jonathan Karl said he asked Trump if he "had any thoughts on the legacy of John McCain," noting that Trump "heard me but did not answer."

Shortly thereafter, while "standing six feet from the president in the Oval Office," Karl once again asked Trump if he'd like to say anything about McCain and the legacy he leaves behind.

Trump "stared ahead and said nothing."

Bloomberg's Jennifer Jacobs tweeted that Trump ignored reporters four times when pressed to reflect on McCain. Jacobs said that although White House staffers were trying to push reporters out of the Cabinet Room, it was obvious the president "still heard us."

Trump refused for the fourth time today to answer our questions about his thoughts on John McCain. The latest oppo… https://t.co/4eJqD11qYW
— Jennifer Jacobs (@Jennifer Jacobs) 1535393963.0

CNN's Jim Acosta, whom Trump routinely chides as "fake news," was also brushed off by the president.

Trump has been given three opportunities to comment on John McCain today, twice in the Oval and once along the Colo… https://t.co/3OdbTEUgwX
— Jim Acosta (@Jim Acosta) 1535392842.0

Trump has been asked on 4 separate occasions today if he has anything to say about the late Sen. John McCain. He ha… https://t.co/TnikpjW8Pk
— Jeremy Diamond (@Jeremy Diamond) 1535394114.0

"POTUS again did not respond to repeated shouted questions about McCain when he stopped at the Rose Garden or in Oval Office," the White House press pool's report of the event at the White House said.

End note of the pool report on Trump welcoming the President of Kenya: "POTUS again did not respond to repeated sho… https://t.co/zqsTT6e0EU
— Kyle Griffin (@Kyle Griffin) 1535393706.0

Trump's silence was blasted on social media as callous and disrespectful.

Are people surprised? Not really. It matters, however, because, like Trump, McCain was a Republican, albeit one who was not a Trump fan.

Since when do presidents pout and sulk?

There were some other suggested topics for questions.

Others were impressed that Trump was able to hold his tongue - something he's not known for being able to do.

Tom Arnold, who has a Vice docuseries airing next month on his quest to find the "Trump Tapes," jokingly knocked the president for his rumored racism.