Trump Unites Left & Right Against His Plan To Militarize The Police 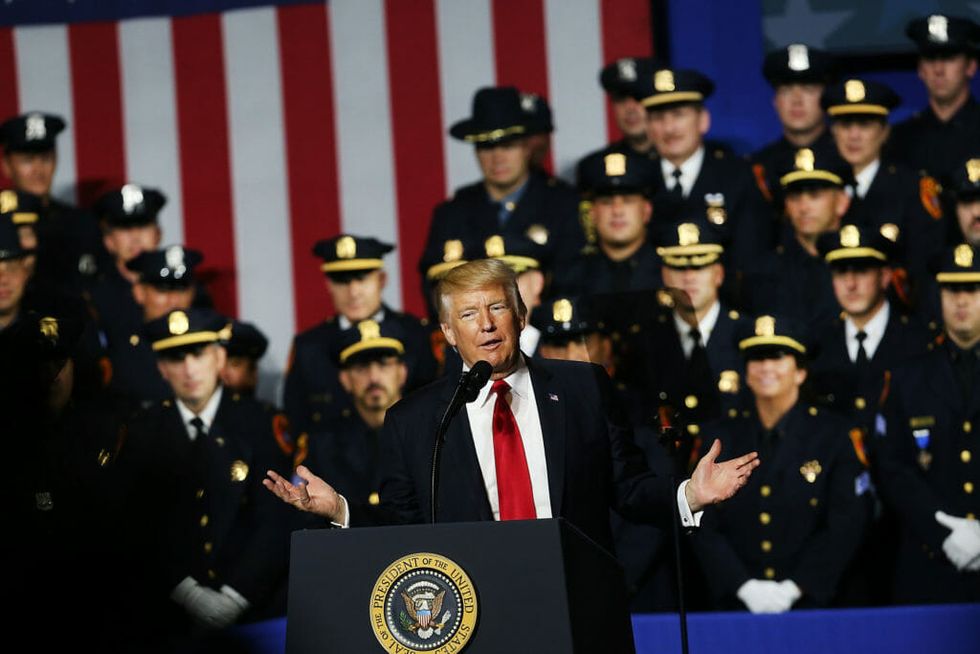 Greg Doucette has a problem. #FSCK ‘Em All — his 30-minute podcast — is never 30 minutes long.

That’s because Doucette uses his weekly check on America’s legal system to detail cases of abuse by police forces against the very people they’re sworn to protect. He never lacks for material, and his 30-minute update often runs to 70 or 80 minutes.

Right-wing pundits might quickly label Doucette another bleeding heart liberal. And they’d be wrong. The conservative libertarian simply believes that power corrupts, and the American legal system is rife with abuse. He uses #FSCK to fight back.

Talk about strange bedfellows. It appears that President Donald Trump has done the impossible by uniting civil libertarians and civil rights advocates under one banner in signing an executive order removing an Obama era regulation that de-militarized the nation’s police forces.

“We will not put superficial concerns above public safety,” Sessions told the gathering. “The executive order… will ensure that you can get the lifesaving gear that you need to do your job and send a strong message that we will not allow criminal activity, violence, and lawlessness to become the new normal. And we will save taxpayer money in the meantime.

“We have your back,” Sessions concluded, “and you have our thanks.”

Not surprisingly, law enforcement agencies were thrilled. “Protective equipment is essential to officer and public safety in a wide variety of life and death situations,” FOP president, Chuck Canterbury, told The Washington Post. “This decisive action by President Trump fulfills a promise he made to the FOP during the campaign, and police officers nationwide are grateful to him. …The previous administration was more concerned about the image of law enforcement being too ‘militarized’ than they were about our safety.”

The 1033 program, as it’s called, permits the U.S. government to supply military-grade weapons, equipment, and vehicles to police forces around the country at the state and municipal level. This provision was included in the National Defense Authorization Act passed in 1997 during the Clinton administration. Twenty years in, the program has changed the face of modern policing.

The Obama administration did subtly alter many “tough on crime” initiatives of earlier presidencies, but one of his boldest moves was to curtail the 1033 program after heavy assault equipment was used against Black Lives Matter protestors in Ferguson, MO. The optics were frighteningly bad. The Ferguson police department looked as if were about to launch an invasion of a hostile foreign power when — ostensibly at least — they were on the scene to keep the peace.

So many police forces in America are armed to the teeth

Law enforcement is a difficult and dangerous job, and no one would suggest otherwise. The police need the tools to do their work as safely as possible. But it’s not wrong to ask if heavy military equipment like rocket launchers, assault vehicles and assault weapons make Americans more or less safe. How many armed fortresses or roadside bombs are police officers in Columbia, South Carolina, likely to encounter during any given year? Yet the city, with a population of 135,000, boasts a Mine-Resistant Ambush Protected Vehicle (MRAP) that can be topped with a 50-caliber machine gun. Even better, for the city’s bottom line, the assault vehicle was virtually donated to the community by Fort Bragg under the federal 1033 program.

With no trace of irony, Columbia bills itself the “Capital of Southern Hospitality.” Just don’t step out of line.

And that’s the problem. If Americans think the situations in Columbia or Keene, NH or Ogden, UT are distant outliers, they’re wrong. Since 9/11, police departments in the US have used Department of Homeland Security funding to procure nearly $40 billion in military-grade equipment. That’s more than three times the annual military budget of Canada.

Critics are worried by this dramatic policy reversal. Justin Mazzola, an Amnesty International researcher, says the change in direction has him very concerned because when police have heavy military equipment, they are inclined to use it — even when the situation demands a subtle touch.

According to Mazzola, dressing and equipping the police with military gear “puts them in the mindset that force is necessary.”

The ACLU is in full agreement, arguing that sending heavily armed officers into routine police situations almost invariably inflames tensions and creates the very situation the intervention was supposed to diffuse. The use of SWAT team weaponry has trickled down to officers running crowd control or patrolling peaceful protests and made bravado and violence a more likely outcome. That’s why the ACLU actually has a primer for communities looking to fight against Trump’s executive order.

Kanya Bennett, legislative counsel at the Washington Legislative Office of the ACLU, isn’t impressed with the president’s timing. “Tensions between law enforcement and communities remain high, yet the president and the attorney general are giving the police military-grade weaponry instead of practical, effective ways to protect and serve everyone.”

Progressives argue that policing is a job that requires a cool demeanour and a deep knowledge of human behavior. Psychology and the common touch are far more important to good community policing and public safety than brute force and the ability to drop an opponent with a single round. It won’t surprise most people to learn that an overwhelming number of police officers will not use deadly force over their entire careers.

In 2016, 63 police officers were killed in the line of duty, and that is certainly a tragedy. But more than 1,000 Americans were killed by police — including 173 unarmed civilians.

That nearly 20 to 1 ratio is why so many activists fight so hard against police brutality. According to the documentary “Do Not Resist,” SWAT teams were deployed about 3,000 times a year in the US during the height of the so-called War on Drugs. But that deployment grew dramatically once the 1033 Program was inaugurated, rising to 50,000 incidents annually in 2015.

Make no mistake about it. People are dying in the United States, and what happens in America bears no resemblance to what happens in any other western democracy despite similar rates of crime. In England and Wales (population 57 million), police have killed 55 people in the last 25 years. In the US (population 316 million), 59 people were killed in the first 24 days of 2015. In Australia (population 23.1 million), 94 people were shot by police between 1992 and 2011. By comparison, police shot 97 Americans in March 2015.

That result shouldn’t surprise anyone who’s studied Psych 101. In a famous — and infamous — 1973 Prison Experiment at Stanford University, Professor Philip Zimbardo created an imaginary jail to see how normal students would respond when classified as all-powerful guards or weak, dependent prisoners. The results are fascinating — and frightening. Within hours, the students classified as guards started abusing and tormenting their prisoners, and the experiment had to be terminated far earlier than intended. The takeaway? People quickly assume the social roles they are expected to play, especially when those roles are stereotypically authoritarian.

The evidence is overwhelming that a variation of the Stanford Prison Experiment is being played out on the streets of America today, and that people of color are suffering horribly.

To define the problem, The Guardian has launched a stark, ongoing interactive project called The Counted that tracks police shootings in the United States. The results are shocking — especially since the US government has no such dataset.

In 2015, black people were nearly three times as likely to be shot by police as white people, while Native Americans were twice as likely to be killed. In 2016, the proportions remain similar for black men and women, while First Nations killings were nearly four times as high.

It’s not about crime. Thirty percent of black victims killed by police are unarmed, while just 21 percent of white victims are. And, as the National Rifle Association would be quick to establish, carrying a weapon in the United States isn’t a crime. Nevertheless, nearly 70 percent of black shooting fatalities at the hands of police were actually not suspected of having done anything wrong. Most were just in the wrong place at the wrong time.

Just like Philando Castile, a law abiding citizen, who was shot seven times in cold blood by a Minnesota police officer while the world watched on Facebook Live and his girlfriend and four-year old daughter looked on. Castile was carrying a concealed weapon, but his actions were textbook perfect when he addressed St. Anthony policeman Jeronimo Yanez, and it made not a shred of difference. He should be the poster child for the guns rights association, yet the NRA continues its policy of only advocating on behalf of white gun owners.

Yanez was actually a “graduate” of a “Bulletproof Warrior” course offered by David Grossman, a former Army Ranger who teaches law enforcement officers that they must act like domestic militia to survive the mean streets of America. Like 99.9 percent of police officers who face charges after shooting citizens, Yanez was acquitted of any wrongdoing.

Any way you slice the pie, police brutality is a huge problem in the United States, and people of color are suffering disproportionately. Given the overwhelming number of deaths that can be attributed to racism and a siege mentality, many people might suggest that Black Lives Matter protests are remarkably restrained. People are dying, and your chances of dying during an encounter with police are far greater if you’re black or Native American. Every American should weep at such injustice.

Las Vegas has found a much better way. For years, the city’s police department had a reputation as gun-happy. When the Las Vegas Review-Journal launched a six-part investigative series on the high number of fatal shootings by police, law enforcement experts determined that most deadly force incidents over the previous 20 years were avoidable. The Department of Justice stepped in, and made 75 recommendations that proposed new training procedures and a deeper understanding of racial bias. By emphasizing reality based de-escalation tactics and invoking a culture of accountability, the Las Vegas Police Department has become a good, albeit imperfect model for the country. Several national police organizations are now endorsing de-escalation, and police academies offer simulated real-world training initiatives.

In 2014, Las Vegas police didn’t kill anyone. It 2015, the number of police-caused deaths spiked again, and then dropped to three in 2016. Other police departments including Phoenix, Albuquerque, Salt Lake and New York City are making similar changes, but it’s never an easy transition. For every crowning success, there’s an abject failure, as Salt Lake knows all too well. Police shootings there have reduced shooting dramatically, but the ugly, hotheaded arrest of nurse Alex Wubbels — who was protecting the rights of her patient — some police officers will act with impunity in any situation.

“It is one thing to train officers on fighting crime,” said Chicago Mayor Rahm Emanuel. “It is a whole other thing to train them to build friendships and relationships, which are integral to fighting crime. This takes time, effort, and patience on the part of police officers.”

Ahh, but here’s the rub. Training law enforcement officers to deploy effective community policing initiatives won’t only save the lives of American citizens, it will save Blue lives too.

The sooner U.S. police departments get that message, the better.

Any time a society makes bold changes, it might very well fail. But the only way to get better is to keep trying.