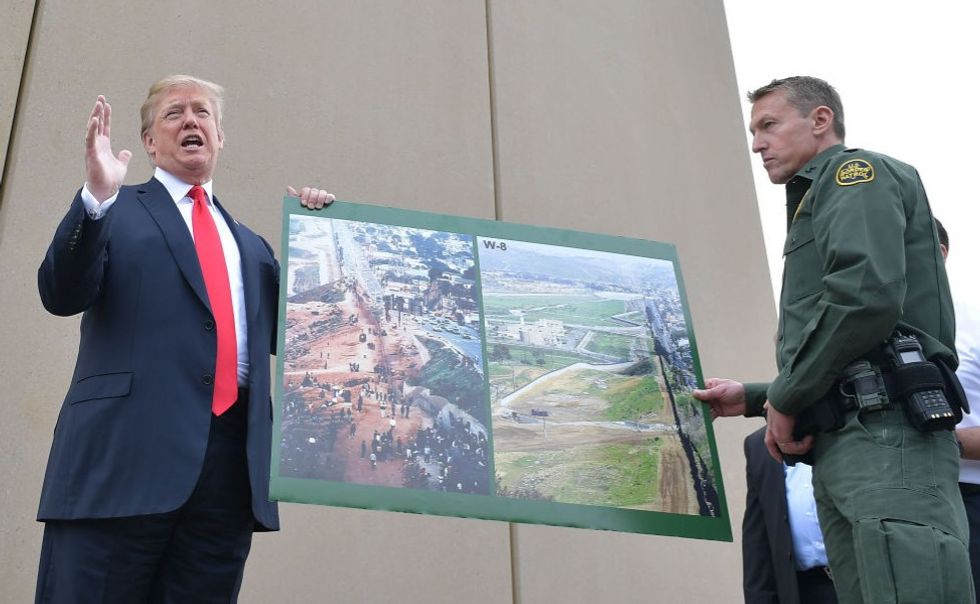 US President Donald Trump holds up a poster of before and after photos of a segment of the border wall prototypes with Chief Patrol Agent Rodney S. Scott in San Diego, California on March 13, 2018. (Photo MANDEL NGAN/AFP/Getty Images)

Back in the beginning of April, President Donald Trump signed a memorandum to call up or reassign Army National Guard members for deployment to the United States southern border with Mexico. So far, about 1,600 troops have been deployed with up to 2,400 more on tap.

Judd referred to the move by Trump as a "colossal waste of resources." NBPC endorsed Trump for president in 2016 because of his stance on immigration and border security.

The NBPC president said he also initially supported the plans for National Guard troops along the border. Previous deployments made by President George W. Bush and President Barack Obama were characterized by Judd as helpful.

But this time “that has not happened at all” claimed Judd. "When I found out the National Guard was going to be on the border, I was extremely excited," he said.

Judd said prior deployed troops had a different role and were more helpful, though they were still not allowed to act as law enforcement.

"They were allowed to do a lot more than they are under the Trump administration,” he said.

The National Guard troops are working primarily on surveillance and air support this time, according to acting chief of Border Patrol, Carla Provost. A Border Patrol spokeswoman said the troops assisted with 3,924 deportations, 1,116 turn backs and the seizure of 3,486 pounds of marijuana all by operating support technology and equipment.

"Instead of an agent watching a camera, they can," the spokeswoman said.

"While the National Guard deployment has not yet reached full capacity," added Katie Waldman, a Homeland Security spokeswoman, "it has clearly and unquestionably been a success with thousands of additional apprehensions and millions of dollars of drugs kept out of our country. The third request for assistance to deploy additional Guardsmen in support of the mission to secure the southern border was recently authorized and is being implemented. More help is on the way."

However, with troops doing surveillance and air support only, actual Border Patrol agents did the bulk of the work related to those actions, with troops only pointing out or watching where things were happening. Judd felt the minimal contribution by the National Guard did not assist as much as the administration claimed.

Agent Chris Cabrera, a spokesman for NBPC in the Rio Grande Valley, said troops are stationed far from the border, duplicating rather than lessening agents' workload.

At observation stations, for example, with remote monitoring devices where Provost and the Pentagon says they are most effective, troops are stationed alongside agents, rather than replacing them, because "they don't know the landmarks."

The last time the National Guard was deployed to the border, in 2014 and 2010, troops manned actual Border Patrol posts on the front lines, easing the workload, Judd said. Although the arrangement restricted National Guard members to an "observe and report" role, unable to personally detain migrants, they still aided with physical patrols.

Texas is the busiest area of the border for migrants and drug smuggling where actual boots on the ground is more helpful than eyes in the sky. Judd said agents had complained to National Guard commanders, but "they just ignore the concerns."

"We generally support the administration," Judd commented, "but we're not going to be cheerleading when things are not going well."

About 750 more troops may soon be added in support roles and the total could reach 4,000 "based on requests for assistance and what they need," according to Pentagon spokesman Army Lt. Col. Jamie Davis.

Provost, acting head of the agency, agreed with that figure, but said that took time. After being hired, agents must spend 117 days, almost 4 months, at the academy.

"At a time when we are asking for more agents, more technology, more wall, they're filling a gap," Provost said of the National Guard.

"Until we can have a wall and proper security, we're going to be guarding our border with the military," Trump said as well as posting to Twitter.

The troop deployment came after numerous failed attempts by the president to gain funding for his border wall in a Republican controlled congress. During the campaign, Trump vowed the wall would be built and Mexico would pay for it.

Mexico has refused to contribute anything toward a border wall.

Critics lambaste Trump over his near obsession with the southern border as the root of all immigration issues. Statistically, the majority of undocumented immigrants enter the country legally as tourists or students or on temporary work visas, then never leave.

Most are also not walking across the southern border, they're flying into airports around the country. Trump has not addressed these major contributors in any of his immigration reform policies.