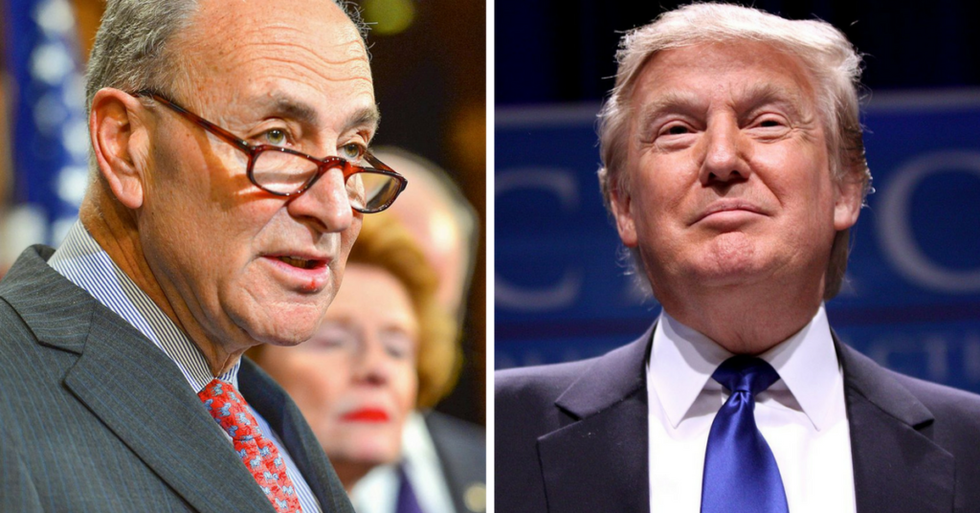 The president did not provide any evidence to support his claim about the visa program, which was being discussed on "Fox and Friends," the morning television program Trump indicated he was watching at the time he tweeted his messages.

The terrorist came into our country through what is called the "Diversity Visa Lottery Program," a Chuck Schumer beauty. I want merit based.
— Donald J. Trump (@Donald J. Trump) 1509535472.0

We are fighting hard for Merit Based immigration, no more Democrat Lottery Systems. We must get MUCH tougher (and smarter). @foxandfriends
— Donald J. Trump (@Donald J. Trump) 1509535848.0

Although the president joined other right-wing pundits who also claimed Schumer was “responsible” for Saipov's entry into the country, their criticisms appear to be without merit. In fact, as The Washington Post confirmed, Schumer "was among a group of lawmakers who sought to drop the visa protocols assailed by Trump." Schumer was part of the Senate's Gang of Eight, which in 2013 devised a bipartisan proposal to remodel U.S. immigration laws. That proposal would have eliminated the visa lottery program. The bill passed the Senate, but not the House.

In a statement posted to his Twitter account, Schumer accosted the president for proposed budget cuts to counterterrorism programs.

“I have always believed and continue to believe that immigration is good for America,” the statement read. “President Trump, instead of politicizing and dividing America, which he always seems to do at times of national tragedy, should be focusing on the real solution — anti-terrorism funding — which he proposed cutting in his most recent budget. I’m calling on the President to immediately rescind his proposed cuts to this vital anti-terrorism funding.”

According to a congressional report, Trump's midyear budget proposal called for cutting more than half a billion dollars from counterterrorism programs administered by the Department of Homeland Security. Included among these programs cuts were programs meant to combat violent extremism, response to terrorist attacks, and security at U.S. airports.

Actually, the Gang of 8, including @SenSchumer, did away with the Diversity Visa Program as part of broader reforms… https://t.co/Ouifle49Mg
— Jeff Flake (@Jeff Flake) 1509539775.0