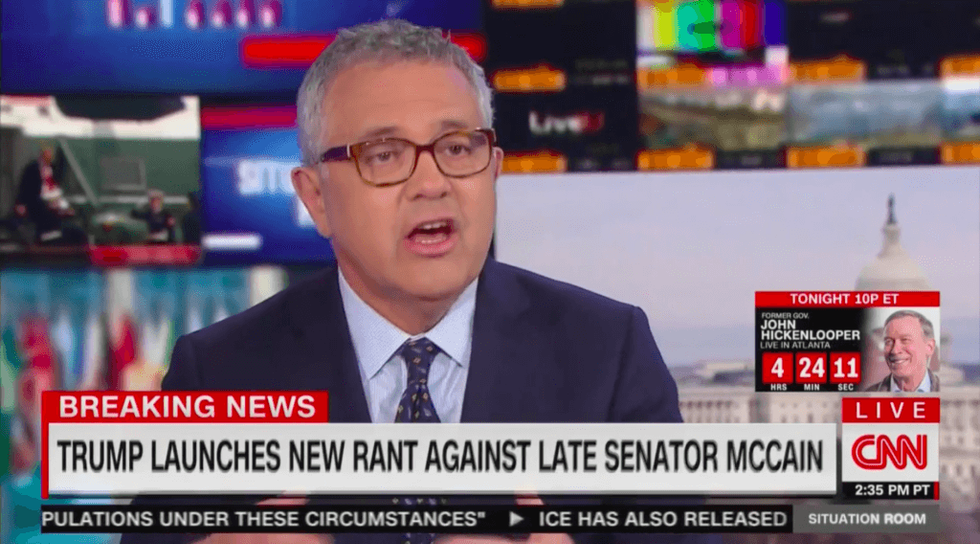 During a segment of The Situation Room with Wolf Blitzer, CNN legal analyst and author Jeffrey Toobin responded to the repeated attacks by President Donald Trump against the late Senator John McCain.

The panel which included Blitzer and CNN political correspondent Rebecca Buck spoke of the breaking story of Trump's extended rant about McCain during a speech he gave at a tank manufacturing facility in Lima, Ohio. Unprompted, Trump launched into disparaging remarks about McCain following several days of remarks and Twitter posts.

In his response, Toobin began with a nod to George Conway's recent Twitter posts regarding Trump's mental health. He then stated:

"...the projection of his own draft dodger status on to the indisputable war heroism of McCain is just extraordinary.”

"The thing he keeps talking about, McCain and the one thing everybody knows about McCain is that he had this extraordinary war record and Trump has the opposite of that."

"I think there’s some psychological thing going on that he hates the fact that McCain is such a hero and he was such a weasel during Vietnam."

Mediaite shared the video excerpt on their website Wednesday evening.

People have been puzzled by Trump's fixation with the late Senator. McCain died in August 2018 after a lengthy battle with cancer, but the President continues his war of words with a dead man as if he were still alive and affecting current public policy.

Trump's remarks at the tank facility—where he seemed to take credit for McCain's funeral and complained that he was never thanked for allowing the Senator to have the funeral he wanted—were particularly puzzling as they were not the response to a question.

"I gave him the kind of funeral that he wanted, which as president, I had to approve. I don’t care about this, I didn’t get a thank you—that’s okay. We sent him on the way. But I wasn’t a fan of John McCain."

Trump ghoulishly pats himself on the back for giving John McCain "the kind of funeral that he wanted, which as pres… https://t.co/gpvbcu2Ec3
— Aaron Rupar (@Aaron Rupar) 1553110743.0

In his prepared remarks before the gathered crowd, the President decided to disparage the legacy of the late Senator again.

But for what purpose?

Is it simple jealousy as Toobin and others assert?

Does the President feel threatened by the reputation and legacy of the late Senator to the point he needs to tear him down to build himself up?

Or is his anger over the Russia investigation that has seen several Trump campaign members and associates indicted, plead guilty, convicted of crimes and his businesses and charitable foundation opened to scrutiny by multiple law enforcement agencies and criminal prosecutors.

During his speech, Trump stated:

"John McCain received the fake and phony dossier. You hear about the dossier? It was paid for by Crooked Hillary Clinton. And John McCain got it. And what did he do? He didn’t call me. He turned it over to the FBI hoping to put me in jeopardy."

In 2016, McCain was given a copy of the dossier and quietly turned it over to the proper authorities. Trump seems to feel—based on his remarks—McCain should have given it to him instead.

Only the President knows for certain why he perpetuates a feud with a man who died almost seven months ago. However his record during the Vietnam War is a story that has dogged him.

His five draft deferments—once for bone spurs during a period he was participating in sports—earned him the moniker Cadet Bone Spurs from his critics and rivals.

McCain by contrast is a Navy veteran and former POW, a fact that Trump seems determined to disparage at every opportunity.

During the 2016 campaign Trump said before a crowd in Iowa that McCain was only a hero because he was captured and he preferred people who had not been captured.

While Trump's base is more likely to attack the McCain family than to rebuke the President for his attacks, the GOP is taking a lot of collateral damage for their failure to speak up in defense of McCain.

How this will affect the party and the 2020 presidential campaign remains to be seen.