The Actor Who Plays Jonah Ryan on 'Veep' Just Revealed Which Republican Senator He Bases Jonah On, and It's Too Perfect 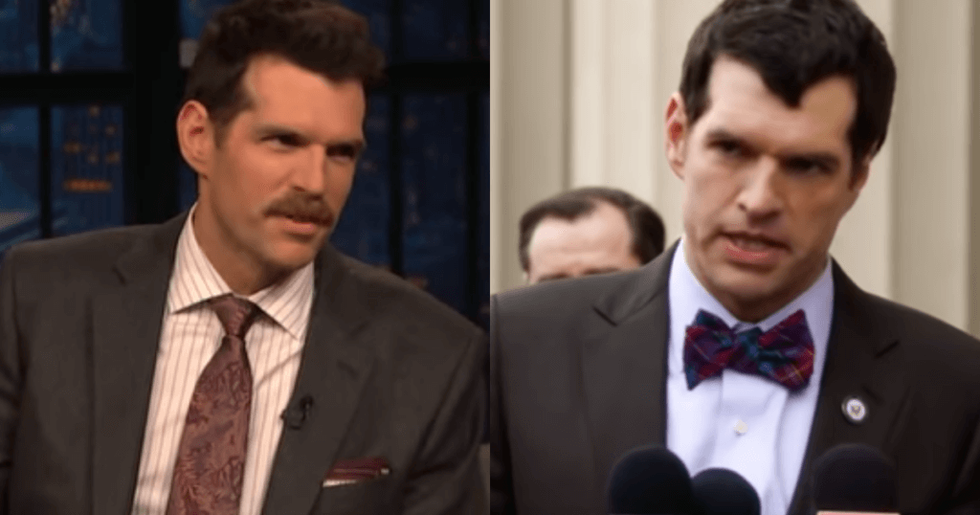 Screenshots from Late Night with Seth Meyers/YouTube, VeepWiki/YouTube
Veep star Timothy Simons has revealed that his character, Jonah Ryan, is based on a real-life politician. (Fear not, there are no season 7 spoilers here).

Ryan is a ne'er-do-well Congressman from New Hampshire who cost Selina Meyer the presidency when he botched a vote in the House after an election ending in an Electoral College tie.

His career began as a "liaison" between the vice president's office and the West Wing - an entirely pointless post he constantly tried to exploit to get girls and rub shoulders with Washington powerbrokers.

Ryan is immature, boorish, crass, gullible, and utterly hilarious for all the wrong reasons.

On Tuesday, Simons explained on Late Night with Seth Meyers that the inspiration for his character is Texas Senator Ted Cruz (R).

Originally conceived out of a “smash together” of "D.C. lackeys that all they care about is proximity to power," it makes perfect sense that Cruz would be Ryan's eventual archetype.

"He's charmless, and he's graceless, and he's narcissistic, and he doesn't care about anybody but himself," Simons said of Ryan, "The person, speaking of charmless and graceless and just universally disliked, I based a lot of it on Ted Cruz."

“Begrudgingly you have to admit that Ted Cruz, he has fallen ass-backwards into some sort of power and until he’s out, everybody just has to deal with him, and that’s very much Jonah’s vibe, that’s his thing,” Simons said.

The connection between Cruz and Ryan was initially drawn a couple of years ago, and people were here for it.

credit to ted cruz where it’s due: i really enjoy getting to see what it would be like if jonah ryan were less self-aware and likable
— Kellie Herson (@Kellie Herson) 1513624869.0

As far back as 2016, Simons was flaunting the parallels.

This was back when Cruz had lost the Republican presidential nomination to Donald Trump.

Remember when Cruz picked Carly Fiorina as his running mate?

Report: It was under the advisement of Jonah Ryan that Ted Cruz announced his VP running mate after getting creamed again on a Super Tuesday
— Brian Monzo (@Brian Monzo) 1461789197.0

If only Cruz were fictional.