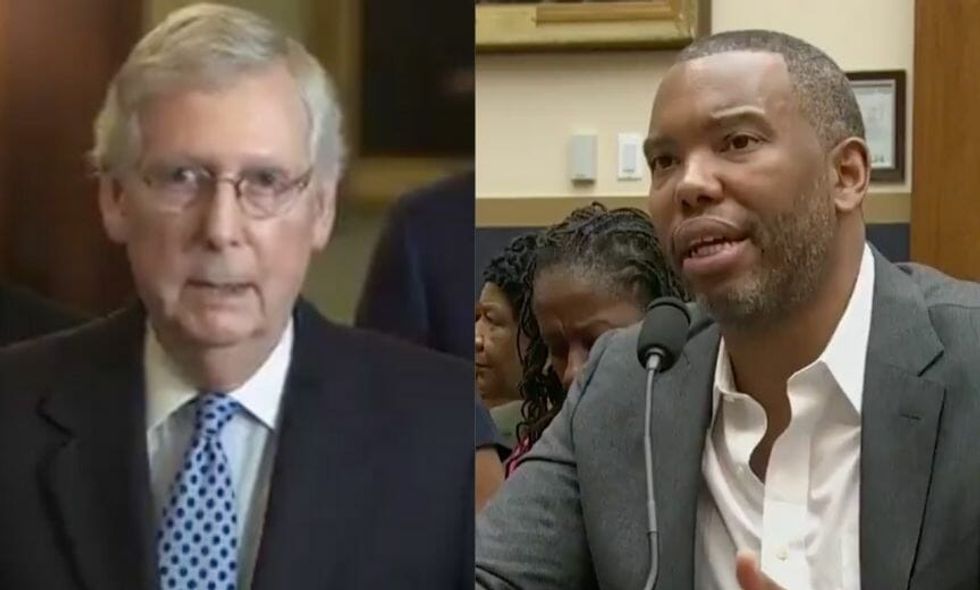 Renowned writer of Between the World and Me, Ta-Nehisi Coates, testified for a House Judiciary Subcommittee today in favor of H.R. 40, which would allow research and consideration for various forms of reparations for descendants of slaves in the United States.

Coates's testimony came one day after remarks on reparations from Senate Majority Leader Mitch McConnell (R-KY), who made the oft-repeated claim that "none of us currently living are responsible" for slavery. McConnell then cited the election of former President Barack Obama as evidence that reparations are not necessary.

In his remarks to the House Judiciary Subcommittee on the Constitution, Civil Rights and Civil Liberties, Coates called out McConnell with a direct and rousing rebuttal spurring spectators to applaud at the end of his remarks.

"[McConnell's] rebuttal proffers a strange theory of governance," Coates said, "that American accounts are somehow bound by the lifetime of its generations, but well into this century the United States is still paying out pensions to the heirs of Civil War soldiers. We honor treaties that date back some 200 years despite no one being alive who signed those treaties."

Coates went on to note that McConnell has been alive for a wealth of atrocities committed to perpetuating white supremacy, on which the defense of American slavery was based.

"What they know, what this committee must know is that while emancipation deadbolted the door against the bandits of America, Jim Crow wedged the windows wide open," Coates said. "That is the thing about Senator McConnell's 'something.' It was 150 years ago and it was right now...The matter of reparations is one of making amends, a direct address, but it is also the question of citizenship."

"In H.R. 40, this body has a chance to both make good on its 2009 apology for enslavement and reject fair-weather patriotism. To say that a nation is both its credits and its debits. That if Thomas Jefferson matters, so does Sally Hemmings. That if D-Day matters, so does Black Wall Street. That if Valley Forge matters, so does Fort Pillow, because the question really is not whether we will be tied to the 'somethings' of our past, but if we are courageous enough to be tied to the whole of them."

The room burst into applause, as did the internet.

People were none too happy with Mitch McConnell either.