Campaign to Convince Susan Collins to Vote 'No' on Brett Kavanaugh Crossed a Huge Fundraising Milestone, and Collins Just Responded

Still have some work to do. 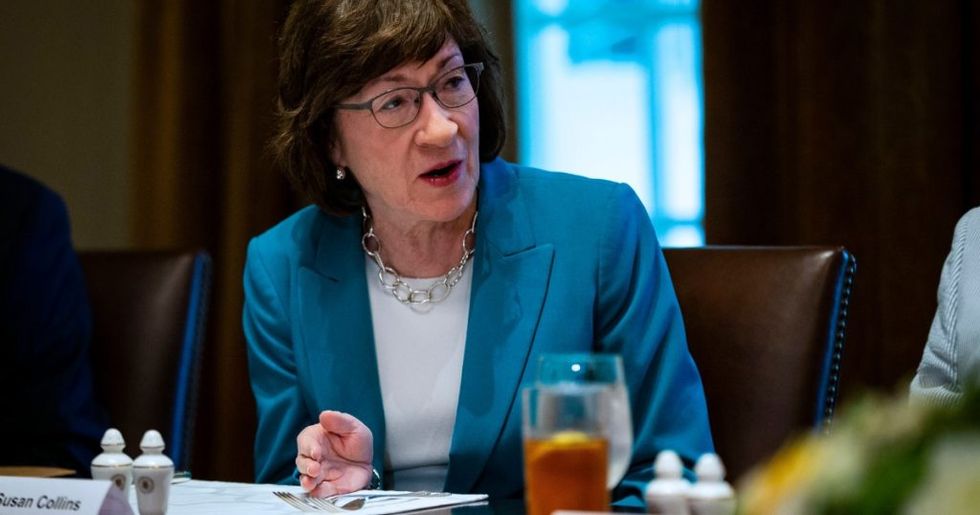 WASHINGTON, DC - JUNE 26: U.S. Sen. Susan Collins (R-ME) attends a lunch meeting for Republican lawmakers in the Cabinet Room at the White House June 26, 2018 in Washington, DC. The president called the Supreme Court's 5-4 ruling in favor of the administration's travel ban a 'tremendous victory,' according to published reports. (Photo by Al Drago-Pool/Getty Images)

Senator Susan Collins (R-ME) is accusing a crowdfunding effort to fund her 2020 opponent if she votes to confirm Brett Kavanaugh to the Supreme Court as an attempted to "bribe" her.

"I consider this quid pro quo fundraising to be the equivalent of an attempt to bribe me to vote against Judge Kavanaugh," Collins, one of only two pro-choice Republicans in the Senate, told Newsmax in an exclusive interview on Monday. The other pro-choice Senate Republican is Alaska's Lisa Murkowski.

Collins is referring to the "Be a Hero" campaign, which was launched last month.

It's not a bribe.

@thehill If it were a "bribe", it would be payable to Collins, not to whoever runs against this two faced Trump ena… https://t.co/zS1VgnRpjr
— John Smith Chicago (@John Smith Chicago) 1536692967.0

Be a Hero's goal is to replace Collins with a Democrat, should the incumbent Republican choose to vote for Kavanaugh, who is seen by many to be a threat to Roe vs. Wade.

Collins said that the Be a Hero effort "will not influence my vote at all, adding that she believes the campaign "demonstrates the new lows to which the judge’s opponents have stooped.

“Kavanaugh is committed to ending healthcare for people with pre-existing conditions. He is committed to overturning Roe v. Wade,” Be A Hero says. “Kavanaugh cannot be nominated – he would mean bankruptcy and danger for millions of families in Maine and America.”

“There are two scenarios” that the website lays out:

"The people of Maine are asking you to be a hero, Senator Collins," the crowdfunding page states. "Your swing vote could decide whether a rubber stamp for Trump’s anti-healthcare, anti-woman, anti-labor agenda gets confirmed to the Supreme Court–costing millions of Americans their health care, their right to choose, and their lives."

As of Tuesday, donations to the CrowdPac have surpassed $1 million of their $1.3 million goal.

Collins has previously said that if Kavanaugh appeared to be a threat to Roe v. Wade, then she may be compelled to vote no.

Roe v. Wade is a case that was decided in 1973 so it’s 45 years old. It was reaffirmed 26 years ago. If you look at how much a part of our society Roe is you could argue it would be very difficult to overturn," Collins said. She added that if evidence surfaced of Kavanaugh issueing false statements during his 2004 confirmation hearing to the United State Court of Appeals, "that would be a major problem for me."

Collins' legacy is seeing as being largely dependent upon her vote on Kavanaugh to the Supreme Court.

The vote on Brett Kavanaugh is the "one on which Sen. Susan Collins' legacy will hinge." —Portland Press Herald col… https://t.co/VcOvpmGou4
— Kyle Griffin (@Kyle Griffin) 1536613211.0

"I know it’s frustrating to the press, but until I finish my review I’m going to defer my decision-making," Collins told Portland Press Herald reporter Joe Lawlor on Friday.

Still, the extraordinary consequences of confirming Kavanaugh to the nation's highest court are rippling through social media.

Chelsea Handler said the Be a Hero movement is "a way of letting you that if you choose to move this country backward, we will support someone who will push it forward," as opposed to a bribe.

Susan Collins called the crowdfunding to get her to oppose Kavanaugh a “bribe.” Actually, it’s a way of letting you… https://t.co/HXvLOR26Jg
— Chelsea Handler (@Chelsea Handler) 1536690259.0

The messages to Collins were clear.

@thehill Yea because we are freaking DESPERATE for you to do the right thing at all costs. @SenatorCollins
— Boomiegirl (@Boomiegirl) 1536687288.0

@thehill Wise up Senator Collins, Kavanaugh's non answers should be telling you that he's lying, that's all you need to know to vote"no".
— Donna Fischer🌊 (@Donna Fischer🌊) 1536693932.0

@thehill If a Senator doesn’t vote the way his or her constituents want, then they have every right to throw their… https://t.co/jrZSLKLqxh
— Margaret Sadler (@Margaret Sadler) 1536688882.0

Careful, Senator, the country is watching.