People Are Pledging to Fund Susan Collins's 2020 Senate Challenger If She Votes to Confirm Brett Kavanaugh, and the Fundraiser Just Went Viral 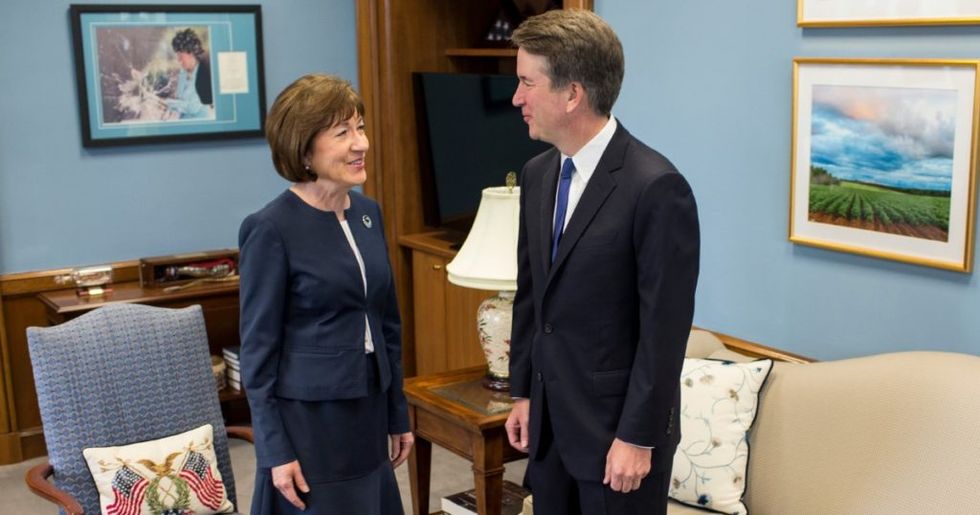 Voters in Maine are raising money for a potential challenger to Senator Susan Collins (R) in 2020 if she votes to confirm Brett Kavanaugh to the United States Supreme Court.

The "Be A Hero" effort, which is operating through CrowdPAC, has raked in more than half a million provisional dollars since its launch last month.

Its goal is to replace Collins with a Democrat, should the incumbent Republican choose to vote for Kavanaugh, who is seen by many to be a threat to Roe vs. Wade.

Collins is widely viewed as independent-minded and is one of only two pro-choice Republicans in the Senate; the other being Alaska's Lisa Murkowski.

"There are two scenarios" that the website lays out:

"Kavanaugh is committed to ending healthcare for people with pre-existing conditions. He is committed to overturning Roe v. Wade," Be A Hero says. "Kavanaugh cannot be nominated - he would mean bankruptcy and danger for millions of families in Maine and America."

The campaign urges Collins to stand up for women and not give in to President Donald Trump's agenda, which Be A Hero views as dangerous.

Your swing vote could decide whether a rubber stamp for Trump’s anti-healthcare, anti-woman, anti-labor agenda gets confirmed to the Supreme Court–costing millions of Americans their healthcare, their right to choose, and their lives.

The site contains a warning for Collins:

If you fail to stand up for the people of Maine and for Americans across the country, every dollar donated to this campaign will go to your eventual Democratic opponent in 2020.  We will get you out of office.

On Thursday, Parkland survivor David Hogg shared the page on Twitter along with an announcement that he had donated.

Celebrities also took to Twitter to urge Collins not to vote for Kavanaugh.

On Thursday, Alyssa Milano quoted Kavanaugh from leaked documents in which the judge questioned whether Roe vs. Wade was settled law. Kavanaugh did not, however, personally opine either way.

“I am not sure that all legal scholars refer to Roe as the settled law of the land at the Supreme Court level since… https://t.co/LPNxfrLd72
— Alyssa Milano (@Alyssa Milano) 1536248625.0

Still, Chelsea Handler made sure Collins got the message.

Hey @SenatorCollins. You can’t use the excuse anymore that he considers it settled law. So, what now? https://t.co/nwbKZmPXhV
— Chelsea Handler (@Chelsea Handler) 1536251283.0

Followers certainly got the message, and are very supportive of Be A Hero.

And some of them aren't even in Maine.

Since Labor Day, the campaign has gone viral on social media.

Mainers have a message for @SenatorCollins | Be a Hero #StopKavanagh WE ARE #WhatsAtStake https://t.co/5905jWCKLo via @YouTube
— Steve Kerrigan (@Steve Kerrigan) 1536091281.0

The campaign is unique in that donors will only be charged if Collins votes for Kavanaugh.