A Focus Group of Swing Voters Just Weighed in on the State of the Union, and It's Not the Result Trump Was Hoping For 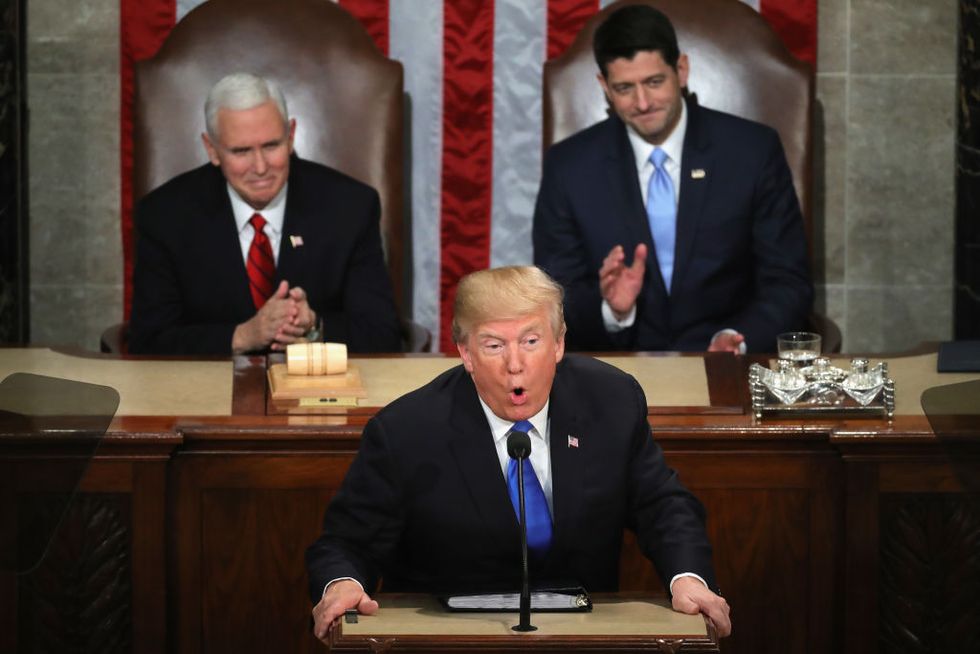 President Donald Trump's first State of the Union address did not impress a group of swing voters who gave his performance a low rating. Though these voters praised the president for his remarks on such topics as vocational education and paid family leave, they said they didn't find his speech particularly convincing. The voters were organized into focus group organized by the Bipartisan Policy Center, a Washington-based think tank.

Matthew Mielke, a business contractor from Washington, D.C., said Trump looked and sounded presidential––but that wasn't saying much. “But we always grade him on a weird curve,” he acknowledged. “If he’s not foaming at the mouth and screaming, we say he did a good job.”

Mielke added that he found it odd that the president would include remarks about standing for the national anthem in a State of the Union address. “I want him to speak to the real issues, not just to people protesting a little bit,” he said. “They have those rights. I liked it when he spoke about issues and not just about things that inflamed his base.”

“You could tell someone else wrote his speech again,” said Francis Marshall, a landscaper from Sterling, Virginia, who voted for Trump in the 2016 election and who voted for Barack Obama in elections prior. “It sounded political instead of him speaking the truth. If you don’t like something just keep it real. Don’t play politics. Speak your mind, and that way I know where you’re coming from, like President Bush did. Bush told you what he was thinking. He stuck to his guns, and I appreciate that.”

Lauren Price, a resident of Takoma Park, Maryland, said she liked how Trump sounded, but that she remains unconvinced that he'll deliver on his priorities. Like Matthew Mielke, she too felt the president's remarks on the national anthem were very out of place. “I have buyer's remorse," she said. "This man has no filter. No one can rein him in. And that wall? I’m not paying for it. You said Mexico was going to pay for it. Now we’re all going to pay for it? He’s going back on his word. He has been lying ever since he took the oath.”

Rich Thau, the president of Engagious, the message testing firm that organized the group on behalf of the policy center, said the dozen voters in the focus group rated the speech "on the plus side of mediocre."

"There was not a single Trump voter who after watching that speech abandoned him and went for Hillary [Clinton],” Thau said. “And there were no Hillary voters who said I should have abandoned her and gone to him.” Elsewhere, he noted that none of the voters were confident they'd see bipartisanship among Democrats and Republicans in the coming year. If the idea was to sell to them that there was going to be an outbreak of bipartisanship this year, the speech didn’t clear that bar,” Thau said.

Nor did the president's address fare well in a separate poll conducted by CNN.

CNN notes that the poll "reflects the views of only those who watched the speech, not of all Americans" and that the poll "was conducted among a group of Americans who said in prior interviews that they planned to watch the speech and were willing to be contacted after its conclusion."

54 percent of those surveyed say they believe Trump has his priorities in check, although that number is lower than the 63 percent from a similar poll after his speech last year to a joint session of Congress. By contrast, 45 percent say they believe the president has not directed time and resources to the country's more significant problems. And while 62 percent say they believe Trumpian policies will move the United States in the right direction, more than 4 in 10 people said they are not confident Trump will be able to carry out his duties as president.

Trump's comments on immigration––which critics allege court white nationalist sensibilities––garnered approval from 56 percent who said they believe the Trump administration is setting immigration policy on the right course, but that number is down from 62 percent who said the same during his last speech. He fared better on infrastructure––an 8 in 10 approval rating––and on the economy––a 7 in 10 approval rating.

Donald TrumpState of the Union