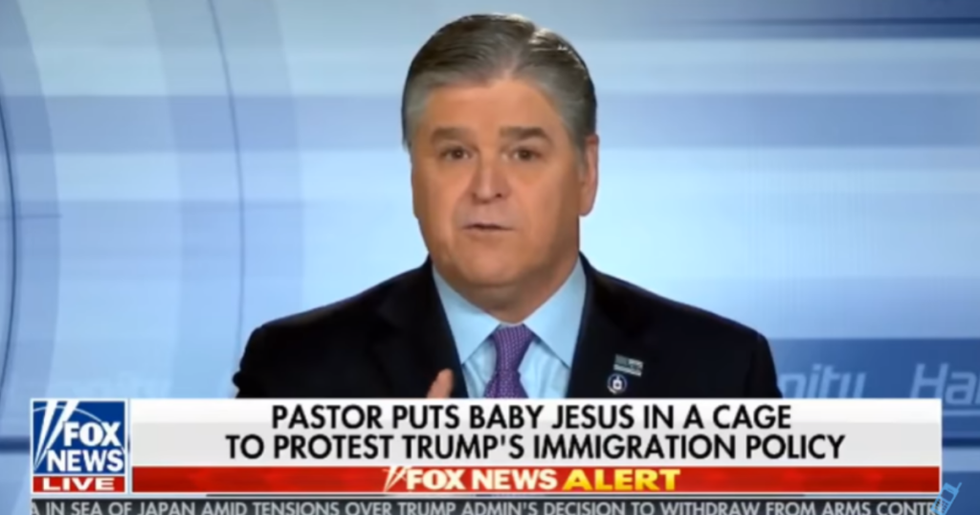 Fox News host Sean Hannity drew heavy fire on Twitter Wednesday night after he declared that Christmas has been "politicized" and is therefore "under siege."

"TONIGHT ON #HANNITY," he wrote, "we'll expose how Christmas is being politicized."

In a second tweet, Hannity said: "CHRISTMAS IS UNDER SIEGE. A Massachusetts church puts baby Jesus in a cage to make a political statement. Watch NOW!"

The source of Hannity's ire was a church in Massachusetts whose nativity scene features baby Jesus and the three wise men in a cage.

"Peace on Earth?" adorns the display outside Saint Susanna's Church in Dedham. Last year, the church posted the names of towns and the number of victims in each that fell victim to mass shootings.

The church's pastor, Steve Josoma, told Boston25 the scene is meant to get people talking.

"Sixty-five million refugees worldwide seeking a better way of life,"  Josoma said, "and we were wondering what that might look like 2,000 years ago if this family encountered the same dynamics that are taking place in our country right now."

In Hannity's mind, the church has declared war on Christmas.

Watch the full episode here. The church segment begins at 27:10.

Twitter turned it around, declaring Hannity as the one politicizing the holiday.

@seanhannity Jesus, Mary and Joesph, it’s you and your employer! You lot are politicizing Christmas!
— LucindaLC (@LucindaLC) 1544064345.0

@seanhannity @trumps_feed There are so few days anymore where anything you say is news worthy.
— Beth-Ane Dorst (@Beth-Ane Dorst) 1544065748.0

Hannity does not appear to care that the nativity scene is depicting the actions of the United States government under President Donald Trump, who implemented a family separation policy earlier this year at the southern border.

The policy resulted in thousands of children getting ripped away from their parents and locked in cages at various detention centers across the Southwest.

Twitter was not about to let Hannity off the hook.

@seanhannity You heard it here folks: Christmas is under siege by *checks notes* the Christian Church.
— Jeroen (@Jeroen) 1544076732.0

@seanhannity You heard it here folks: Christmas is under siege by *checks notes* the Christian Church.
— Jeroen (@Jeroen) 1544076732.0

@seanhannity Jesus was a brown baby, so, acordenly with this administration, that is very apropiate.
— Porfirio Díaz (@Porfirio Díaz) 1544067617.0

@seanhannity Christmas is not under siege. Hundreds of innocent children are - locked up in cages on our border. Merry Christmas.
— amyoliverbarnes (@amyoliverbarnes) 1544070851.0

@LaurieHinckley @seanhannity They are mirroring what the administration is doing to people seeking asylum. Matthew 25:40
— Kimki (@Kimki) 1544104491.0

Trump in July declared victory in the war on Christmas, so Hannity totally missed the mark.

@seanhannity Someone wished me Merry Christmas just today. This whole “war on Christmas” is nonsense and you know i… https://t.co/2zWwqoI55o
— Tanya Manus (@Tanya Manus) 1544097407.0

"Remember, I said, it’s awfully early to be thinking this, but I always think it. Remember the attack on Merry Christmas? They’re not attacking it anymore," Trump said in Tampa. "Everyone’s happy to say ‘Merry Christmas,’ right? Merry Christmas! That was under siege. You’d have these big department stores that say ‘happy holidays.’ They say where’s the ‘Merry Christmas?’ Now they’re all putting up ‘Merry Christmas’ again. And that’s because only because of our campaign.”