They Just Found a Massive "Hole" in our Sun 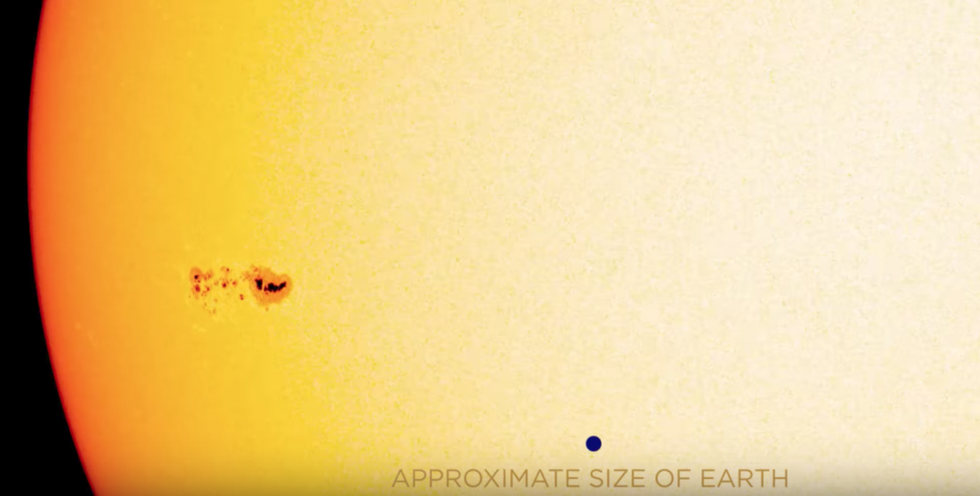 You may have heard that earlier this month the Northern Lights, also known as Aurora Borealis, were visible much farther south than usual. That’s because a coronal mass ejection from the Sun hit the Earth’s magnetic field. The phenomenon is connected to a massive "hole" in the Sun that astronomers discovered using NASA’s Solar Dynamics Observatory. The hole, better known as a sunspot, is so large it’s bigger than the Earth itself.

This sunspot is an estimated 75,000 miles wide, dwarfing the Earth whose circumference is roughly 25,000 miles around. The video below shows time-lapse footage of the massive sunspot rotating into view over the 42 hours the camera was trained on it. Before this sunspot came into view, the sun had none for a period of two days.

Sunspots and coronal mass ejections are two different effects of the Sun’s massive magnetic field and constitute two important elements of what we refer to as space weather. The Earth’s magnetic field, by contrast, is what protects the Earth from the Sun’s radiation.

The Sun goes through an 11-year cycle of solar activity. A solar maximum is defined by peak space weather events: more sunspots, solar flares, and coronal mass ejections. We are currently approaching solar minimum, which is expected to occur in 2019 or 2020.

The material that composes the surface of the Sun is constantly moving and twisting, but the equatorial regions move much more quickly than the polar regions of our star. Because of this, the magnetic field becomes twisted; think of rubber bands that are wound so tightly that they snap. These snapped portions are sunspots, which usually are found close to the Sun’s equator.

When these “snapped” portions of the Sun’s magnetic field reconnect with one another, an awesome amount of energy is released, which can trigger a solar flare. This energy violently moves up through the Sun to its surface and is released in the form of solar particles and radiation. It only takes eight minutes for the particles of a solar flare to reach the Earth, but these particles are invisible to the naked eye.

Returning to our rubber band analogy, the snapping of the Sun’s magnetic field means that some of the Sun’s surface plasma is no longer held down. When it escapes from the star, triggered by a solar flare, it’s called a coronal mass ejection. The Sun can have multiple coronal mass ejections per day, and while they don't usually affect the Earth, when they do they are responsible for both aurora and geomagnetic storms.

It’s still too early to predict what will happen to this massive sunspot and how much space weather will occur as a result. But you can bet that NASA scientists are keeping their eye on it, and you can too. With proper solar eyewear (that is very important), this sunspot is visible from the Earth with the naked eye.