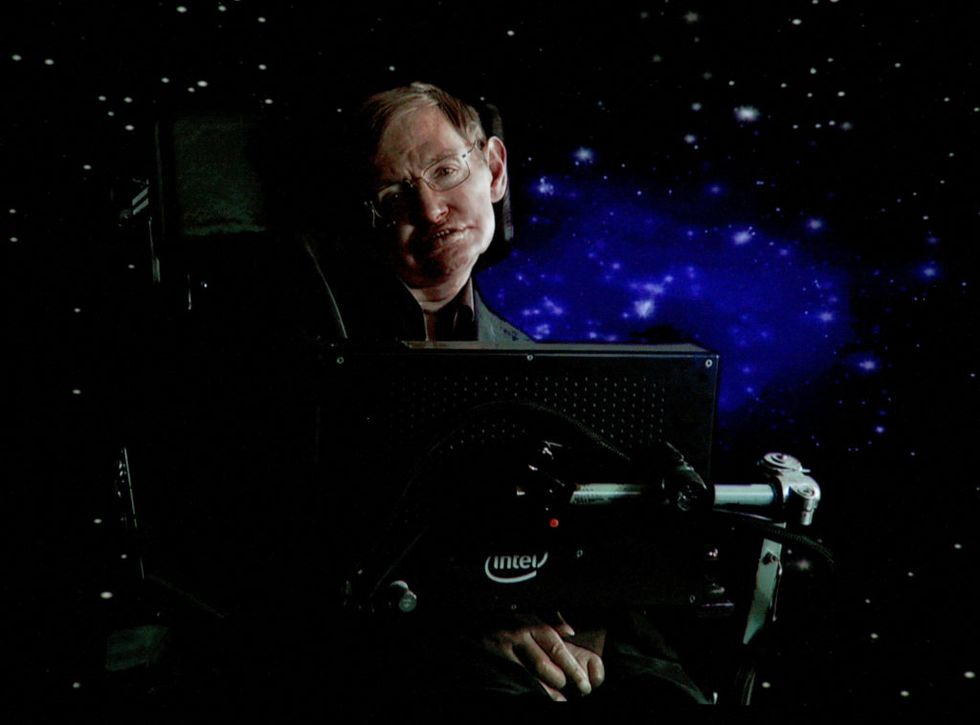 PASADENA, CA - JANUARY 14: Scientist Stephen Hawking of "Into The Universe With Stephen Hawking" speaks via satellite during the Science Channel portion of the 2010 Television Critics Association Press Tour at the Langham Hotel on January 14, 2010 in Pasadena, California. (Photo by Frederick M. Brown/Getty Images)

In March of this year, astrophysicist Stephen Hawking passed away at the age of 76 due to complications from the motor neuron disease called amyotrophic lateral sclerosis (or ALS). The debilitating disease left him relatively immobile and confined to a wheelchair. Upon losing his ability to speak, he communicated by interacting with an electronic device that synthesized words. He rose to worldwide fame for his teachings on space-time and the universe, and now it is fitting that a part of him has been sent into space.

Hawking spent most of his career studying black holes. Black holes represent an area of space where massive gravitational forces have deformed and collapsed space on itself, where nothing can escape the gravitational pull once an object has passed the point of no return known as the “event horizon.” Astrophysicists, such as Hawking, have postulated that no object is immune to the gravitational force of a black hole, whether electromagnetic radiation or particles of matter. Albert Einstein’s general relativity theory supports the concept of the formation of a black hole. Notably, Hawking discovered that from just beyond the event horizon, black holes emit a special form of radiation that has been termed Hawking radiation.

On Friday, June 15th, the European Space Agency (or ESA) projected a recording of Stephen Hawking’s voice toward a black hole known as “1A 0620-00,” which is the closest known black hole to Earth at a distance of 3,500 light years. His voice will be played over a special musical track prepared by the Greek composer Vangelis who is famous for the song “Chariots of Fire.”

The transmission took place during a special memorial service held at the Spanish Cebreros antenna, which was played for the guests, all of whom were given a CD with the recording. It has yet to be determined if and when its content will be released to the general public. Coincident with the transmission, Hawking’s ashes were interred at Westminster Abbey near the grave sites of Sir Isaac Newton and Charles Darwin.

Once the voice transmission reaches the black hole, it will become trapped near the outer edge of the spatial phenomenon. However, it will not be permanent. Over the course of billions of years, Hawking radiation will continue to bleed away into space until the black hole itself dissipates from existence.

Hawking’s family is incredibly grateful for the honor being bestowed on him by the ESA. His daughter, Lucy, was quoted saying that “this is a beautiful and symbolic gesture that creates a link between our father’s presence on this planet, his wish to go into space and his explorations of the universe in his mind.”

In 1993, Hawking was given the opportunity to journey into space aboard the starship Enterprise from Star Trek: The Next Generation, appearing as himself in the sixth season episode “Descent, Part I.” In the opening of the episode, Data, the android science officer of the ship played a game of poker with Hawking, Einstein, and Sir Isaac Newton in a holographic simulation. At the conclusion of the exchange, Hawking wins the round of poker. As an avid Star Trek fan, this experience was very likely the fulfillment of a dream for the famed astrophysicist.

In the end, the journey of his voice through the stars to the black hole is a partial fulfillment of one of Hawking's fondest dreams.

Hawking had stated in a BBC interview in 2006 that he wished to experience space travel. He had experienced zero gravity while traveling onboard a specially designed jet made by Boeing to determine whether his body could withstand the rigors of space flight. Richard Branson, the chief executive officer of Virgin Galactic, offered to provide Hawking with a free trip into space. Unfortunately, as commercial spaceflight does not yet exist, his promised trip into space by Virgin Galactic could not occur. Now, with the posthumous transmission of his voice into space, the life dream of this prominent scientist has at least been partly realized.