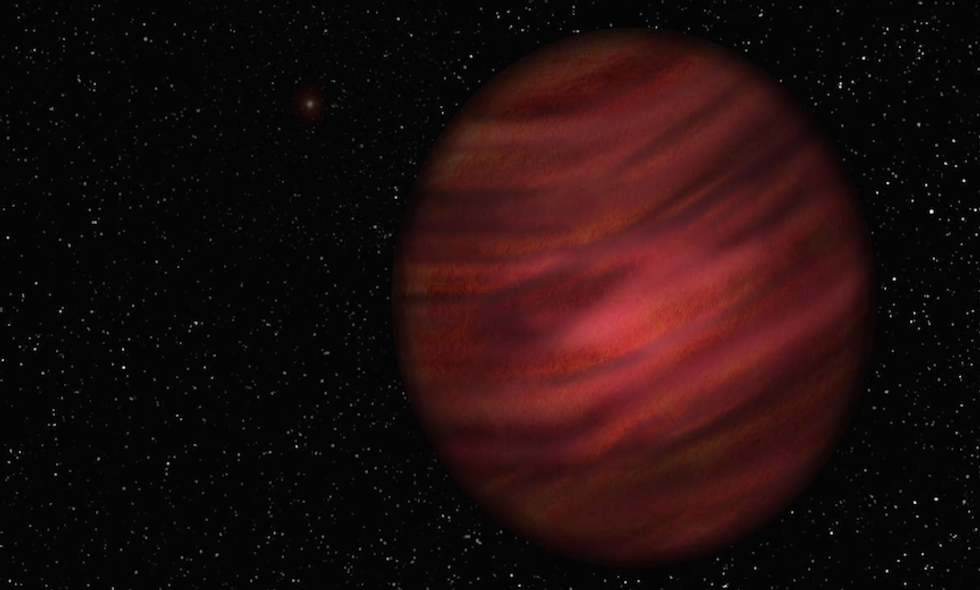 At 1 trillion kilometers from its parent star (or roughly 621,000,000,000 miles), the planet—likely a gas giant—has the widest known orbit in the galaxy. To put that number in perspective, it is roughly 6,900 times the Earth’s orbit around the sun.

2MASS-J2126 is thought to be similar in composition to Jupiter, but on a much larger scale. Credit: Source.

The distance between the two is so immense that the parent star – a red dwarf – would look like just another moderately bright star in the sky. In fact, the distance between them is so large that, until recently, scientists thought the planet was roaming aimlesslywithout its own star to orbit.

A team of astronomers in the United States, United Kingdom and Australia published their findings on this immense solar system last month in the Monthly Notices of the Royal Astronomical Society. Although both the planet and the star had been known to astronomers for the past eight years, they only recently discovered the relationship after noticing that they were both located 100 light years from earth, implying that they are associated. Further analysis showed that they were also moving together.

“The planet is not quite as lonely as we first thought, but it’s certainly in a very long distance relationship,”

lead author Dr. Niall Deacon of the University of Hertfordshire quipped in a statement about the findings.

Scientists are not sure how a solar system this wide could have formed, but they are confident about one thing: “There is no way it formed in the same way as our solar system did, from a large disc of dust and gas,” said astronomer Simon Murphy from the Australian National University, a co-author of the study.

The group believes that this new system was born relatively recently, cosmically speaking (about 10 to 45 million years ago, rather than our solar system’s 4.5 billion years ago) from a “filament of gas that pushed them together in the same direction,” said Murphy.

As for how they came to be so wide apart, Murphy opined: “They must not have lived their lives in a very dense environment. They are so tenuously bound together that any nearby star would have disrupted their orbit completely.”

Definite answers as to the science behind this far-flung solar system will take more research. Said Murphy, “How such a wide planetary system forms and survives remains an open question.”