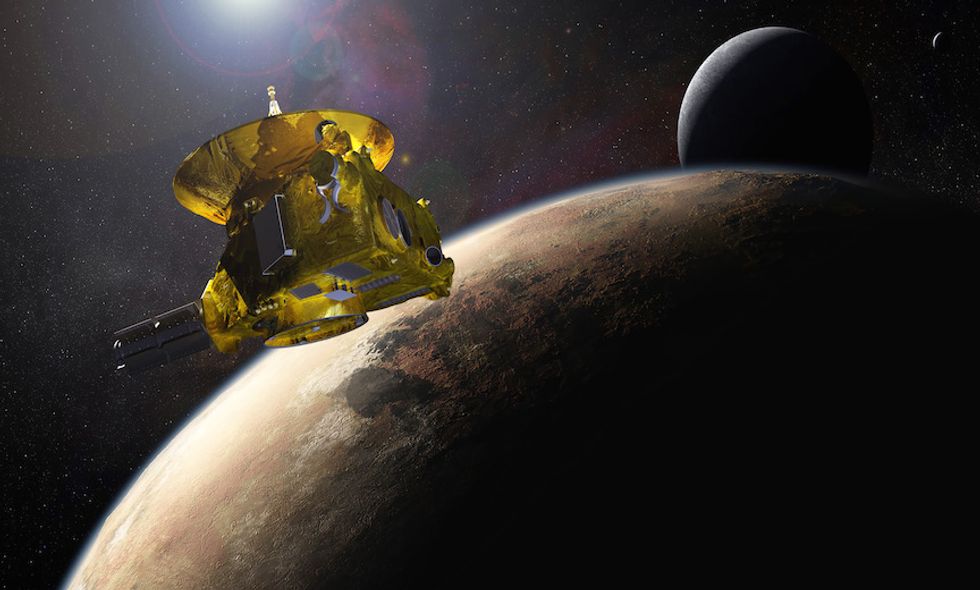 In January 2006, the New Horizons mission launched toward Pluto. In August 2006, the International Astronomical Union reclassified Pluto; it is no longer considered a planet. Regardless of Pluto’s category, the New Horizons spacecraft persevered, flying past Pluto in July 2015. Since then, scientists have been analyzing a trickle of tantalizing data as it is (relatively) slowly downlinked from the spacecraft.

The most recent data shows that Pluto’s climate undergoes cycles lasting millions of years because of its significant and varying tilt. The new data, presented at the 47th Lunar and Planetary Science Conference in Houston, was unexpected to say the least: “What the data reveal did not surprise us, it shocked us,” said NASA’s James Green.

All  the planets in our solar system lie within the same plane, like different tracks on the same record. However, their poles do not all point in the same direction: Earth’s axis tilts about 23 degrees from vertical, Mars’ axis tilts about 25 degrees, and Jupiter’s axis tilts only 3 degrees, making its spin nearly parallel to the planetary plane. These angles, called axial tilts, produce the seasons: when an area tips toward the Sun, it experiences longer, hotter days. Pluto’s axis is currently tilted over 120 degrees from vertical: it spins almost perpendicularly to the plane of the planets.

Earth’s axial tilt only ever changes by about 1 degree in either direction. Pluto’s axial tilt, according to new data from the New Horizons mission, may wobble by up to 20 degrees over a period of millions of years. Pluto spins like a top that’s moments away from falling down.

These huge changes in Pluto’s axial tilt likely contribute to huge changes in its atmosphere and climate. Right now, Pluto appears to be in the middle of its cycle: it has tropical zones, where the sun passes directly overhead; arctic zones, where, like Earth’s northern latitudes, there are alternating prolonged periods of sunlight and darkness; and “tropical arctic” zones, which experience a little of both. When Pluto’s tilt decreases, its climate gets more

extreme, with larger areas experiencing both tropical and arctic climates. When the tilt increases, the climate becomes more temperate, with smaller tropics and smaller arctic zones.

In addition to affecting how much sunlight each area on Pluto gets, the axial tilt also affects the atmospheric pressure, or how much “air” (Pluto’s air is mainly nitrogen, with some methane and other gases) is near Pluto’s surface. Images from New Horizons, supported by computer models of Pluto’s past, suggest that Pluto may have had a much higher atmospheric pressure in the past.

While Pluto’s average surface temperature of about minus-240 degrees Celsius is far too cold for liquid water, nitrogen melts at minus-210 degrees, if the atmospheric pressure around it is high enough. Right now, Pluto’s atmosphere is too thin to allow for liquid nitrogen on the surface. I The atmosphere may have been much thicker in the past, perhaps thick enough to allow for nitrogen lakes and streams. Images suggest frozen nitrogen lakes and networks of steambeds are present on Pluto’s surface, but it is still too early to be certain.

As New Horizons’ Principal Investigator Dr. Alan Stern said, “Pluto is so dynamic that different cases may apply in different epochs. We found this little planet where everything is coupled together.” Pluto is fascinating as it is, but the New Horizons data, which will not be completely retrieved from the spacecraft until the end of this year, is sure to continue to reveal a surprising picture of Pluto’s motley past.