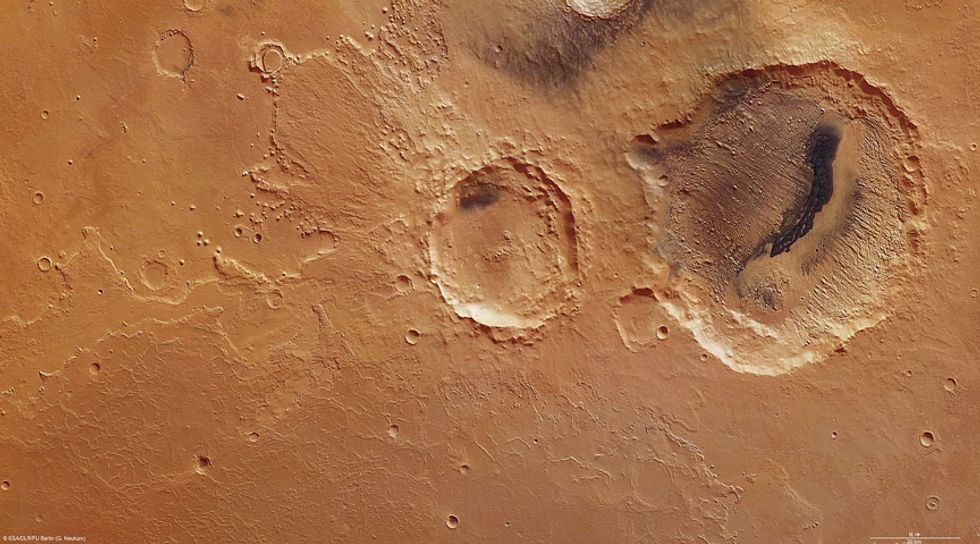 Last month’s discovery of flowing water on Mars suggests that the planet is much more than the frozen wasteland we’ve imagined. According to NASA, the presence of flowing water significantly increases the likelihood that life did, at one time, exist on the red planet. Even more exciting is the possibility that life in some form could be present now.

The presence of life, of course, doesn’t imply little green men. According to the New York Times, temperatures on the surface of Mars can range all the way from -70 degrees Fahrenheit and below to 70 degrees in the summer—hardly the kind of climate that could sustain complex life forms.

But simpler, much smaller Martian extremophile organisms could be present on Mars’ surface. These organisms would likely be similar to viruses and enzymes that may have existed as little flecks of seasoning in Earth’s primordial soup, long before the presence of bacteria. As their name suggests, extremophiles can survive in extreme cold and intense heat; on Earth, these kinds of organisms can be found, for instance, around deep-sea hydrothermal vents where it is too hot for other kinds of life to exist.

Some vents are surrounded by a dense fauna via Wikimedia Commons

While the possibility of life on Mars is thrilling, it also presents a critical problem: if scientists want to study that life with any kind of accuracy, they’re going to have to prevent little bits of life from Earth from contaminating Mars. As Dr. Catharine A. Conley of NASA points out, “[i]f we’re going to look for life on Mars, it would be really kind of lame to bring Earth life and find that instead.” Dr. Conley is NASA’s planetary protection officer: her job is to prevent Earthlings in any form from spreading on Mars—at least until scientists have had a chance to investigate any existing life.

Dr. Conley’s job is an important one. Though sending human beings to Mars won’t happen for a while yet—NASA doesn’t expect to send humans to Mars until the 2030’s—earthly organisms may already be present on Mars. NASA’s concern is that microbes living on various spacecraft, like NASA’s own Mars rovers and the Soviet Mars 2 lander, “hitchhiked from Earth” to Mars; these microbes may not only have survived the trip, but could have set up camp.

Efforts are underway to limit such contamination, but those efforts are preventing NASA’s rovers from exploring the very areas on Mars where life is most likely to exist. According to the New York Times, certain “special regions” of Mars are off limits to NASA’s Opportunity and Curiosity rovers. The reasoning is that some areas of the planet may be more hospitable to organisms from Earth. And though some of Earth’s microbes probably have made it to Mars, so far they have only made it to inhospitable areas. In other words, it’s likely that the microbes have either been killed off or have remained dormant. According to Dr. Conley, this means that “[s]o far, Mars is still pretty clean.”

According to The Guardian, rovers looking for life must meet certain classifications for cleanliness set by the Committee on Space Research (Cospar). Though the Curiosity rover meets Cospar’s cleanliness requirements necessary to search for life (a classification referred to as IVb), it doesn’t meet Cospar’s higher threshold for exploring special regions (IVc). The Guardian reports, however, that discussions are underway about whether Cospar will bend its rules to allow Curiosity to explore areas where flowing water exists. While it’s possible that exposure to ultraviolet light may have killed off any problematic microbes still lingering on Curiosity, a report from the US National Academy of Sciences and the European Science Foundation suggests otherwise. According to the report, dust particles might sufficiently reduce the negative effects of the UV radiation to allow the microbes to survive.

Future rovers sent to explore the so-called “special regions” will certainly undergo intense sterilization processes in order to prevent contamination. Curiosity’s fate, however, remains unclear. At least for now, the rover will have to continue to observe Mars’ special regions from a healthy distance.