What Could Be in the New Hidden Chamber in Egypt's Great Pyramid? 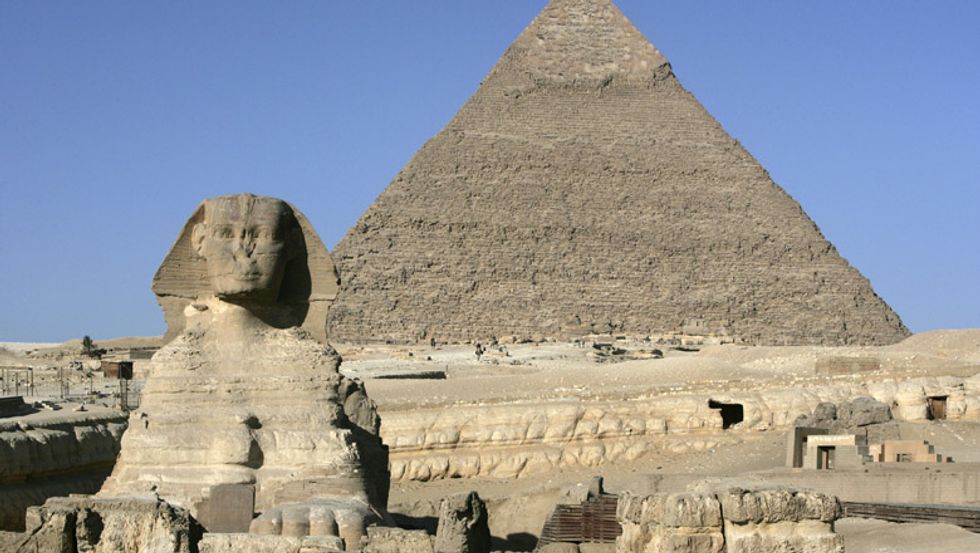 The Sphinx is seen in front of the Great Pyramid on February 9, 2006 in Giza, Cairo, Egypt. (Marco Di Lauro/Getty Images)

Scientists are reporting a newly discovered "void" within the Khufu monument in Egypt by using a technique called muography. According to a Japanese study carried by the U.S. National Library of Medicine & National Institute of Health, "Muography is an emerging technique that provides information complementary to and independent from existing techniques using an elementary particle called a muon... A muon is one of the elementary particles, that can penetrate rocks thicker than 1 km [0.6 miles]." Prior to its use on the Great Pyramid, muographic technology has been used to study volcanoes.

The Great Pyramid is located at Giza on the outskirts of Cairo. It is also known as Khufu's Pyramid because it was built during the reign of Pharaoh Khufu between 2509 and 2483 BC. It is the largest pyramid in Egypt and stands at 460 feet, or 140m.

According to the BBC, "Khufu famously contains three large interior chambers and a series of passageways, the most striking of which is the 47m-long, 8m-high Grand Gallery." The newest discovery with muographic technology has identified a new feature that is right above the Grand Gallery.

What could be in it?

As of now, Scan Pyramids, the team behind the finding is being careful not to call the latest finding a "chamber" despite other media reports. But past discoveries of new chambers have conceded interesting finds. Earlier this year, archaeologists working on the outskirts of Giza discovered a chamber that was likely the final resting place of the daughter of 13th Dynasty King Emnikamaw, writes CBS.

Another "secret chamber" was discovered in late 2015 by using radar to scan Tutankhamun's tomb in the Valley of the Kings. According to the Daily Mail, Queen Nefertiti queen may have been buried there in a secret chamber, but the discovery was found to be inconclusive and has been dismissed by some Egyptologists.

Scan Pyramids has announced they plan to use robots to investigate what could be in the latest void discovered in Khufu's Pyramid.