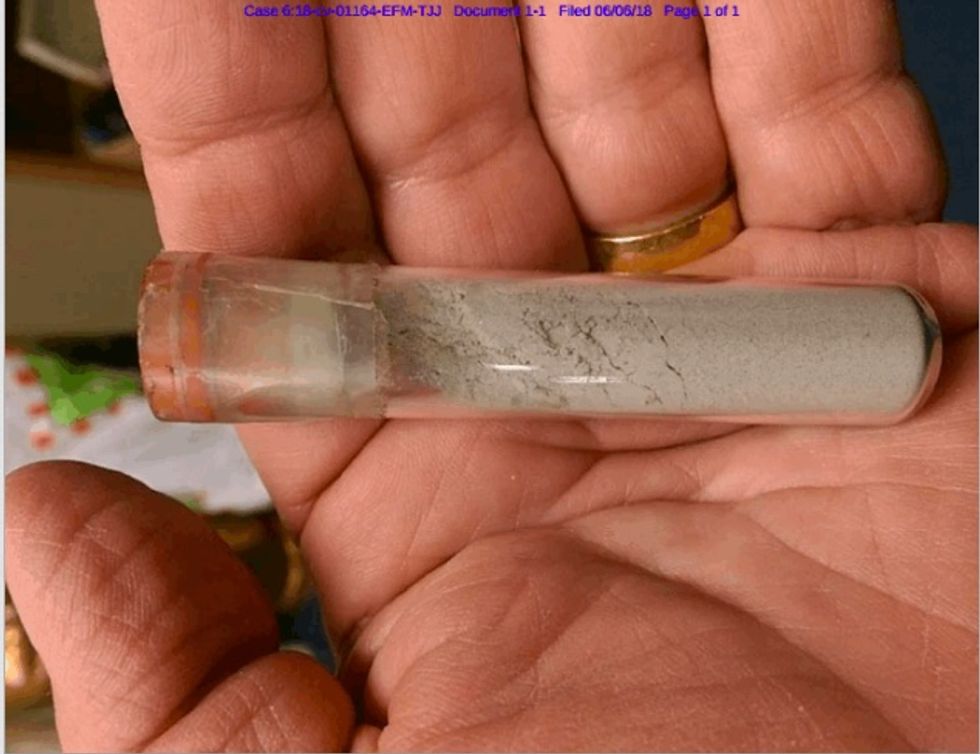 Credit: US District Court for the Federal District of Kansas

Les Brown famously said: “Shoot for the moon, and if you miss, you will still be among the stars.” Now, you might instead find yourself among criminals.

This appears to be the case for a Tennessee woman named Laura Murray Cicco, who claims to have a vial of moondust in her possession. According to the National Aeronautics and Space Administration (or NASA), “private persons cannot own lunar material” and doing so is considered a federal crime. Ms. Cicco asserts that she was gifted this vial of moondust from Neil Armstrong, one of the astronauts that participated in the Apollo 11 mission; notably, the first human set foot upon the moon. And she intends to sue NASA to maintain her ownership of the moondust.

Extraterrestrial materials brought back to Earth via the United States space program have been declared “government property” by NASA. Approximately 840 pounds of lunar material were transported back to Earth during moon missions from 1969 to 1972. The majority of the collected material has been stored in vaults at NASA facilities since that time. Several of the moon rocks were gifted by President Nixon to various nations around the world as a sign of good will, which were later referred to as the “goodwill moon rocks.” However, it has been estimated about 180 of the 270 moon rocks brought to Earth by NASA are unaccounted for, which has prompted the government to investigate.

In 1998, NASA sought to crack down on the sale of normal rocks being fraudulently advertised as genuine moon rocks in a sting operation spearheaded by the Office of the Inspector General called Operation Lunar Eclipse. An advertisement seeking the purchase of moon rocks was placed in USA Today to lure sellers of bogus lunar materials. Unexpectedly, this operation led to the recovery of a bonafide moon rock from the Apollo missions, which turned out to be the “goodwill moon rock” given to Honduras.

Since then, additional authentic moon rocks have been successfully recovered by authorities. These include the “goodwill moon rocks” given to the states of Alaska, Arkansas, Colorado, Hawaii, Missouri, Nebraska, North Carolina, Oregon and West Virginia as well as those gifted to the countries of Canada, Cyprus, Honduras (as mentioned above), Ireland and Nicaragua.

Moreover, there have been outright thefts of lunar material from several different locations including the Johnson Space Center, the National Air and Space Museum, the Louisiana Science and Nature Center, as well as from vehicles transporting NASA items. The heist of moon samples from the Johnson Space Center involved a group of interns, which became the subject of a book written by Ben Mezrich: Sex on the Moon: The Amazing Story Behind the Most Audacious Heist in History.

Ms. Cicco was prompted to sue the government after a NASA sting operation in 2011 that apprehended an elderly woman trying to sell small fragments of moon rock. The woman in question, Joann Davis, was the widow of former NASA engineer Robert Davis, who had also received the lunar rocks from Neil Armstrong when Davis was in charge of the Apollo 11 program. When she was pressed with a desperate financial situation, she attempted to sell the moon rocks and contacted NASA directly, seeking their assistance in finding a buyer. However, the Office of the Inspector General at NASA interpreted this as criminal activity and arranged a meeting with Ms. Davis, where she was detained and interrogated by armed federal agents. This resulted in her suing the federal government for her detention that was described in the court case as “unreasonable…unreasonably prolonged and unnecessarily degrading”. Ultimately, Ms. Davis’s case was dismissed in court.

Complicating the situation for Ms. Cicco is the possibility that the moondust may not be genuine. Some experts doubt that Neil Armstrong would have actually gifted lunar material to civilians. Her attorney submitted the moondust sample for analysis via X-ray diffraction spectroscopy, which revealed that the minerals from the purported vial of moondust were “consistent with lunar soil.” However, the minerals were similar to those found in the lunar highlands, which is a region of the moon that Armstrong had never visited. Thus, questions remain about the authenticity of Cicco’s moondust.

The legality of the government’s claim on all lunar materials is up for some debate. In 1967, the United States and more than 100 other nations ratified the Outer Space Treaty. This treaty stipulated that no country could claim ownership of any extraterrestrial land or celestial body. However, the precedent has been established that extraterrestrial materials intended for scientific research can be claimed by the nations involved in the treaty.  This is where NASA exerts its authority of all lunar rocks and soil samples.

NASA contends that Neil Armstrong did not have permission to gift moon material to anyone. This has drawn the ire of some who view this as impugning the reputation of an American space hero.

Intriguingly, beyond just lunar samples, NASA is estimated to possess over 160,000 extraterrestrial materials, including meteorites, asteroid fragments, and other objects. They have loaned out as many as 26,000 of these items for education and research. Unfortunately, more than 500 of them are currently unaccounted for. Their loss has been either classified as theft or inadvertent loss. This makes one wonder how many extraterrestrial objects are circulating globally without any oversight.

The future of Ms. Cicco’s lawsuit against the federal government is uncertain, though the outcome of the earlier Davis case does not bode well.

On a final note, with the rapid expansion of global commercialized ventures into space such as Space X, will NASA still be able to assert legal control over substances obtained by these private non-governmental industries?