How To Build A Mega Telescope

NASA plans to launch the successor to the Hubble telescope in 2018. What does it take to build a telescope that will send images to earth from a million miles away? 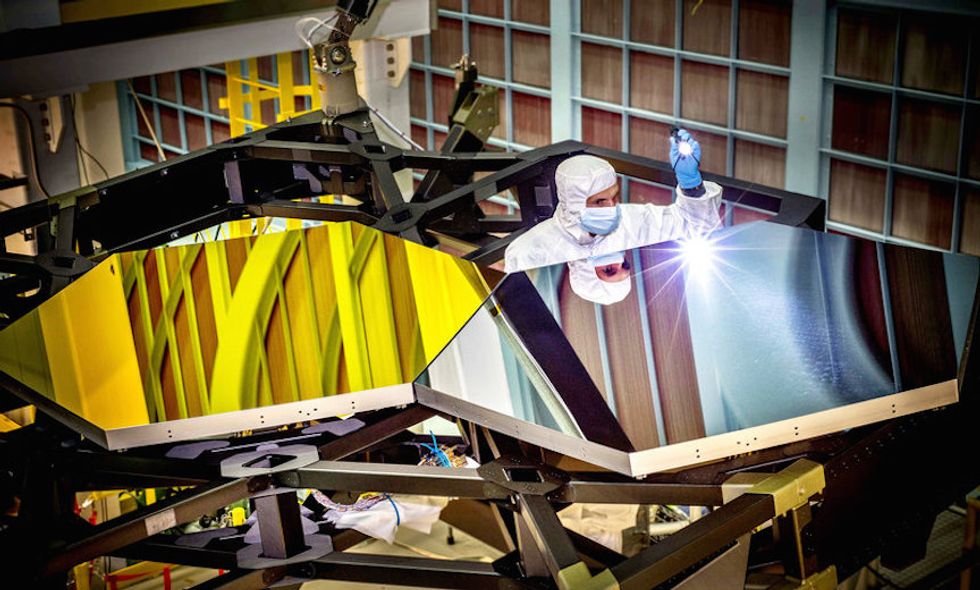 NASA's team has assembled nearly all of the hexagonal segments that will together make the James Webb Space Telescope's primary mirror. Credit: Source.

Ever wondered how you build a telescope the size of a gymnasium? NASA has set up webcams in the building area at Goddard Space Flight Center in Maryland to provide constant updates to curious onlookers. From the comfort of home, space enthusiasts can peek into the gigantic clean room where engineers, covered head to toe in protective suits and gloves, are building the James Webb Space Telescope, the successor to the Hubble.

The special suits are designed not for the builder’s safety, but to protect the delicate surface of the telescope from any contamination or damage. Each individual reflective sheet is made of hexagonal plates of silver and gold, and requires a thick notebook of step-by-step building instructions.

The mirrors are mounted on a spine-like structure known as the Pathfinder. The largest single piece is the sunshield, a thin, five-layer membrane that must unfurl to specific tolerances. It passed recent tests superbly, and is now complete. When the entire structure is finished, it will look like a giant satellite dish, two stories high.

Visitors to the 2014 SXSW festival were treated to a viewing of a full-scale model that looked like a giant honeycomb suspended over an industrial looking hammock.

Bill Ochs, the project manager, has said of the process "So far, everything — knock on wood — is going quite well," and the telescope is expected to be

completed in 2018. Once launched, the telescope will unfold like a giant Transformer robot, and will travel a million miles from earth, so far that humans could never travel to repair it.

It will be able to transmit light from the very first stars and galaxies, and scope out the farthest reaches of space for possibly habitable, or inhabited planets. Astronomer John Mather is the project’s lead scientist, and he thinks that the telescope may afford humankind some astonishing discoveries, as did the Hubble during its prime.

Webb is not a replacement for the Hubble, but its successor. It picks up where Hubble left off, using Hubble’s limitations as the jumping off point for the new telescope. The Hubble telescope, which launched into orbit in 1990 and is still in use, was not the first space telescope, but was in its time the largest and most versatile. Now the Webb telescope will pick up where the Hubble left off, using Hubble’s limitations as its jumping off point.

Hubble looks at the universe primarily in optical and ultraviolet wavelengths, while Webb uses infrared. Webb’s light collecting mirror is significantly larger, which enables it to see farther back into time than the Hubble. Finally, while Hubble orbits Earth, Webb will be sent to the second Lagrange point, or 1.5 million miles from earth.

With a price tag of $8 billion, the Webb telescope is a generational milestone, a project of a lifetime for those working on it. With no way of knowing what the telescope will find, it is an exciting time to witness a broader understanding of the universe.