Scientists believe they've been able to pinpoint the culprits. 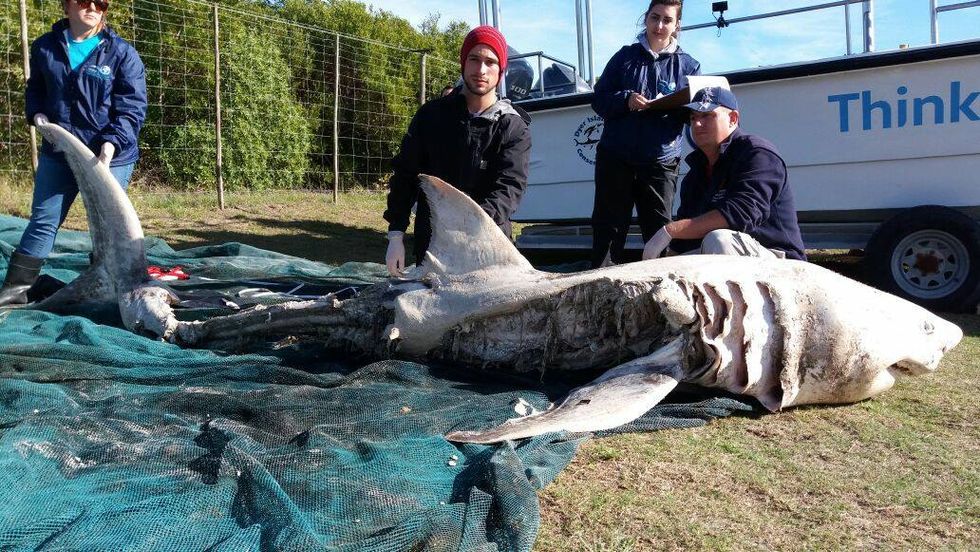 A great white shark washed up on a South African beach late last month––the fourth since early May. Its liver, like the three before it, had been removed with “surgical precision.” As scientists arrived to inspect the carcass, the likely culprits were seen slowly circling the scene. The suspects? A pair of orcas.

This rampage is unusual in its precision. In all cases, the liver had been neatly removed. In the most recent case, the shark’s stomach and testes had also been removed, causing it to “[bleed] out massively.”

BiologistAlison Towner,who,with Dyer Island Conservation Trust, led the dissections of the sharks, said of the attacks: “Obviously this is a very sad time for us. Nature can be so cruel but the dexterity these killer whales are capable of is mind blowing—almost surgical precision. That is the way in which they have removed the squalene-rich livers and dumped the shark carcass. We have never seen anything like this before in great white deaths.”

Experts believe that the orcas are targeting the sharks’ livers because they are rich in a compound calledsqualene, a hydrocarbon which aids in the production of steroids and hormones. However, according to a statement by theDepartment of Environmental Affairs, this type of selective feeding is quite rare in orca whales. Orcas have been known to target specific organs––for instance, they will sometimes kill whale calves andonly eat their tongues. However, presumably killing a great white shark would require a more significant expenditure of energy, and would merit a more considerable feasting.

It is alsounusual for orcas to prey on great white sharks at all. Great whites are considered apex predators. Before these recent incidents, there were no records of orcas going after great white sharks in this region and only a few isolated instances were recorded elsewhere.

While it is unclear how the orcas managed to subdue the great whites and attack them so precisely, a1997 video taken off the coast of San Francisco may provide some clues. In the video, the orcas are seen flipping over a great white before attacking it. When turned upside down, many sharks become stunned and unable to fight back.

Samuel Gruber, a researcher at Bimini Biological Field Station in the Bahamas. said that orcas are so intelligent that they could be able to pass on this technique to their brethren. “Their learning abilities are so great, that if one of them happened to [employ this technique] and see that [sharks freeze up] in this state, they could communicate it to the other ones.”

The two orcas suspected of the killingsremain at large. The pair were seen near the site where the great whites had washed up shortly after the attack, but no reports of sightings have been issued since.