Apollo 10 Astronauts Heard “Eerie Music” on the Dark Side of the Moon, and It Wasn’t Pink Floyd

Astronauts heard “eerie music” on the far side of the moon. Was this an otherworldly mystery, or was there a simple explanation for the sound? 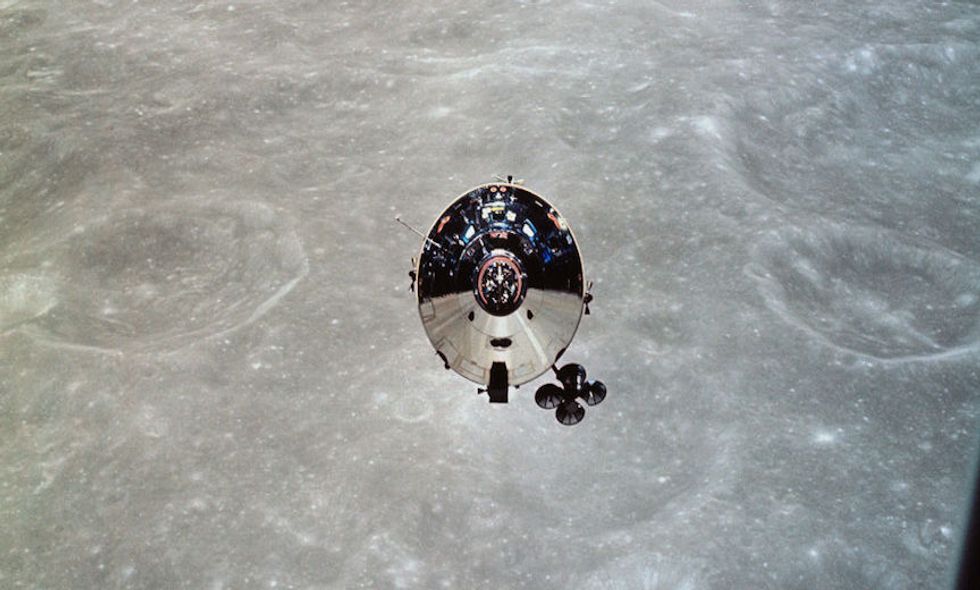 It was May 1969, and U.S. astronauts were closer than ever before to the surface of the moon. The Apollo 10 lunar module, manned by Commander Thomas Stafford and pilot Eugene Cernan, was descending to less than 47,000 feet above the moon before completing a rendezvous with the command module, piloted by John Young. The astronauts were preparing for the giant leap for mankind that would take place two months later.

Their conversation topic of choice? An ongoing, unidentified noise they described as “eerie music.”

“That music even sounds outer-spacey, doesn’t it? You hear that? That whistling sound?” Cernan said, according to the Apollo 10transcript, which NASA initially marked as confidential.

Segments of theaudio recording of the astronauts’ conversation aired last month in an episode of the Science Channel seriesNASA’s Unexplained Files. The show hinted at a cover-up involving “lost” recordings

of an “unsettling incident on the far side of the moon.”

"The Apollo 10 crew was very used to the kind of noise that they should be hearing. Logic tells me that if there was something recorded on there, then there was something there," Worden said on the Science Channel show. “I just think we don’t understand it.”

While the TV episode focuses on the mysteries swirling around the dark side of the moon, NASA and two astronauts offer a fairly prosaic resolution. NASA also rejects the show’s assertion that the recordings had been “lost.”

“While listed as ‘confidential’ in 1969 at the height of the Space Race, Apollo 10 mission transcripts and audio have been publicly available since 1973,” NASA said in a statement. “Since the Internet did not exist in the Apollo era, NASA has only recently provided digital files for some of those earlier missions.”

As for the noise the astronauts heard, NASA technicians told the Science Channel it was caused by radio interference between the lunar module and the command module.

The Apollo 10 astronauts weren’t the only space crew to hear the noise.

“There is a strange noise in my headset now, aneerie woo-woo sound,” Apollo 11 pilot Michael Collins wrote in his book, Carrying the Fire: An Astronaut’s Journeys, saying he heard the noise when the radios in the lunar and command modules were on and both spacecraft were near each other.

“Had I not been warned about it, it would have scared the hell out of me,” he wrote. “Fortunately the radio technicians (rather than UFO fans) had explanations

for it: interference between the LM’s [lunar module’s] and Command Module’s VHF radios.”

The Apollo 10 transcript indicates that while the astronauts were in space, they did not know what the sounds were, with Cernan saying at one point, “Boy, that sure is weird music.” But 40 years after landing a man on the moon went from science fiction to history, it’s easy to forget that it wasn’t just the noises that were “weird” or “eerie.”

Everything connected to flying to the moon was strange, as the astronauts’ conversations made clear.

When they saw the craters of the moon on Day 4, Young said, “By God, they are craters! … That’s the weirdest-looking surface.” On Day 5, Stafford noted, “There may be a side lobe. It’s weird, isn’t it?” The same day, at around the same time that they chattered about the music, Cernan asked if his fellow astronaut’s insulation was burned off on the front side of his window, adding: “Mine’s all burned off. Isn’t that weird—eerie, John?”

Four decades later, Cernan sounds a great deal more composed about his experience in outer space, particularly that “weird” noise. “It was probably just radio interference,” he admitted in February. “Had we thought it was something other than that we would have briefed everyone after the flight. We never gave it another thought.”