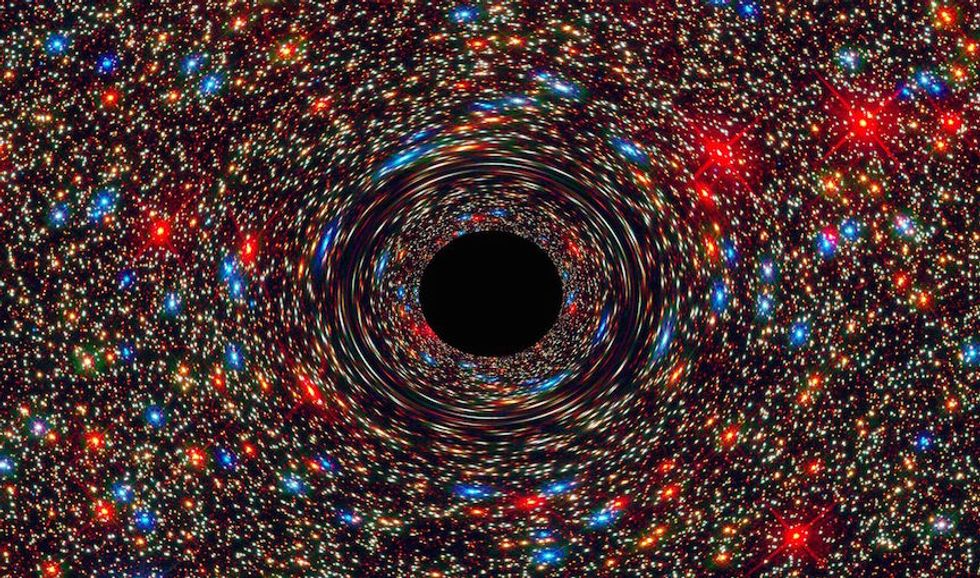 Dark matter remains a mystery of modern cosmology. Something unseen in the universe is exerting gravity, affecting how galaxies spin and ensuring that whole clusters of galaxies don’t drift apart. It’s widely accepted that dark matter exists and that, like normal matter, it has mass. Unlike normal matter, however, it is invisible, or “dark.” Most scientists favor the theory that dark matter is made up of particles like visible matter, but every attempt to directly detect or even conclusively characterize those particles has proven unsuccessful.

But now a startling new theory posits that, rather than comprising new, exotic particles, dark matter is actually made up of black holes. "Studies are providing increasingly sensitive results, slowly shrinking the box of parameters where dark matter particles can hide," said Alexander Kashlinsky, an astrophysicist at NASA’s Goddard Space Flight Center. "The failure to find them has led to renewed interest in studying how well primordial black holes - black holes formed in the universe's first fraction of a second - could work as dark matter."

Left: This infrared image from NASA's Spitzer Space Telescope of a sky area in the constellation Ursa Major. Right: After masking out all known stars and galaxies to enhance what's left, an irregular background glow appears. Credit: NASA

Kashlinsky had the idea that primordial black holes could be responsible for the effects of dark matter in 2005, while examining data from NASA’s Spitzer Space Telescope. He and his team were studying the cosmic infrared background, a low-level glow that permeates the universe. This light was irregular and patchy, with more bright spots than could be explained by distant galaxies. In 2013, another study at NASA’s Chandra X-ray Observatory showed similar patchiness in the cosmic x-ray background (the pervasive field of ancient x-rays) in the same spots. Kashlinksy believes the only objects that could plausibly have caused that level of patchiness across the spectrum of light are black holes.

NASA has several continuing projects to study the nature and origin of dark matter. Among them are the Fermi Gamma-ray Space Telescope, which observes high-energy light from the center of our galaxy, and the Alpha Magnetic Spectrometer, which detects cosmic ray particles from the outside of the International Space Station. According to Kashlinsky, "This study is an effort to bring together a broad set of ideas and observations to test how well

they fit, and the fit is surprisingly good… If this is correct, then all galaxies, including our own, are embedded within a vast sphere of black holes each about 30 times the sun's mass."

In his new paper, Kashlinsky outlines his theory: In the first thousandths of a second after the Big Bang, when the universe was scorching hot and rapidly expanding, dark matter started to clump together. If dark matter was actually black holes, this process would have occurred much more rapidly, constraining the possible size of the holes. As they captured gas and other matter, they would heat up and produce x-rays, creating the patchiness observed in the cosmic infrared and x-ray backgrounds. If primordial black holes operated this way, they could account for one out of every five sources (mostly stars, galaxies, and quasars) contributing to the cosmic infrared background.

A clue may have been offered by a rare cosmic event. Occasionally, two black holes will pass too close to one another and become gravitationally bound. As they slowly lose orbital energy and emit gravitational radiation, they spiral inward and eventually merge together into a single enormous black hole. In February, researchers at the Laser Interferometer Gravitational-Wave Observatory (LIGO), which consists of two detectors, one in Louisiana and one in Washington, announced that they had detected this sort of event for the very first time. It was the first-ever detection of gravitational waves, as well as the first direct detection of black holes (which had previously only been detected indirectly).

similar to what LIGO detected," Kashlinsky explained. "If we assume this is the case, that LIGO caught a merger of black holes formed in the early universe, we can look at the consequences this has on our understanding of how the cosmos ultimately evolved."

If most or all dark matter is actually made up of primordial black holes, it could have a profound impact on our understanding of the development of the early universe. But the evidence for primordial black holes as dark matter is far from conclusive. "Future LIGO observing runs will tell us much more about the universe's population of black holes, and it won't be long before we'll know if the scenario I outline is either supported or ruled out," Kashlinsky said.

Kashlinksky’s scenario has a long way to go towards wide acceptance. The prevailing belief that dark matter is mostly made up of small but massive particles like neutralinos is backed by decades of careful study, though not enough to conclusively prove it. Kashlinsky and his team’s next project, called Looking at Infrared Background Radiation Anisotropies with Euclid (LIBRAE), will study the cosmic infrared background in more detail, determining how much of its patchiness is likely caused by black holes. It will be attached to ESA’s

It will be attached to ESA’s Euclid mission, scheduled to launch in 2020. Between the two of them, LIGO and LIBRAE will yield evidence either for or against primordial black holes as dark matter, and we may then know whether galaxies are held together by the gravity of clouds of exotic particles, by fields of enormous, ancient black holes, or by some as-yet unforeseen force.