We Now Know How Saudi Officials Used a Body Double to Cover Up Jamal Khashoggi's Death, and There's Surveillance Footage to Prove It 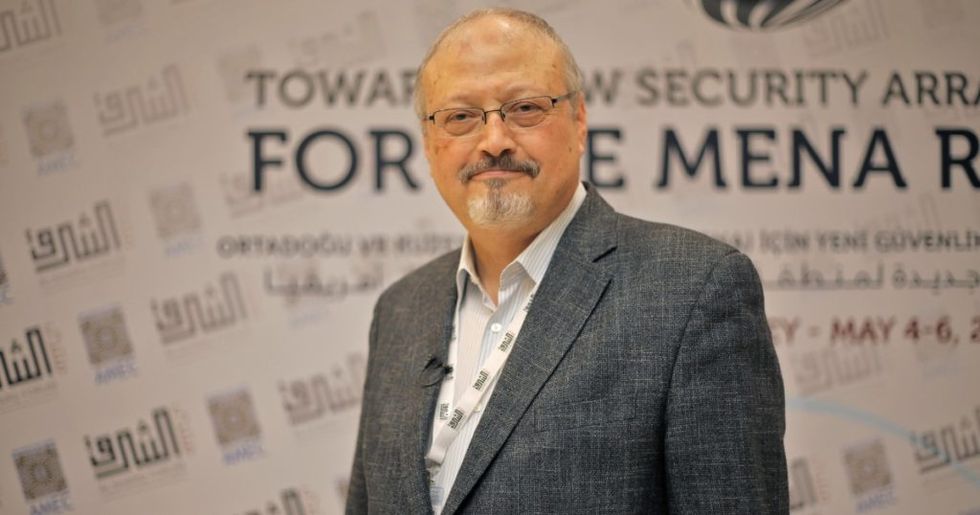 The mystery surrounding the disappearance and assassination of Jamal Khashoggi deepened on Monday after a Turkish official told CNN that one of the men involved with Khashoggi's murder posed as a body-double after the journalist was killed.

Security camera footage obtained by CNN shows an individual wearing Khashoggi's clothes, a fake beard, and glasses leaving the Saudi Consulate in Istanbul shortly after Khashoggi vanished inside on October 2.

The man dressed as Khashoggi, Mustafa al-Madani, is believed to have been part of the 15-man hit squad that carried out the torture and brutal killing of the Washington Post columnist.

"In the apparent cover-up that followed Khashoggi's death," CNN wrote on Monday, "Madani, 57, who is of similar height, age and build to Khashoggi, 59, was used as a decoy for the journalist, according to the Turkish official."

After Saudi Arabia murdered Jamal Khashoggi in their consulate, they took his clothes off, and put them on a body d… https://t.co/RpKQflN9Z0
— Shaun King (@Shaun King) 1540214299.0

"Madani, a decade older than the other members of the 15-man team, exited the consulate building by the back door along with an alleged accomplice," CNN reported. "Madani was wearing what the video appears to show to be Khashoggi's dark blazer, gray shirt opened at the collar and trousers."

One Turkish official told CNN that al-Madani was specifically brought in to act as a body-double once Khashoggi was dead. He entered the Saudi Consulate around 11:00 A.M.

"You don't need a body double for a rendition or an interrogation," the official said. "Our assessment has not changed since October 6. This was a premeditated murder and the body was moved out of the consulate."

"Khashoggi's clothes were probably still warm when Madani put them on," the official added.

Khashoggi arrived a couple hours later. Shaun King notes the difference in shoe size between Khashoggi and the man pretending to be him.

Here is al-Madani leaving the consulate dressed as Khashoggi, minus the shoes.

At 2:52pm Mustafa al-Madani leaves the Saudi consulate, no longer wearing the clothes he entered the consulate with… https://t.co/K4tRkXlmUJ
— Shaun King (@Shaun King) 1540217141.0

Below is al-Madani spotted leaving the Blue Mosque in his own clothes after he had prayed while impersonating Khashoggi.

@shaunking But this was simply a spontaneous fist fight that, per usual, ended in dismemberment.
— John O'Keefe (@John O'Keefe) 1540214466.0

@shaunking What a coincidence that his body double was there ahead of and waiting for him! Wow. Will wonders never cease!
— toni_nh (@toni_nh) 1540217458.0

@shaunking They’re trying so so hard and yet failing miserably in trying to cover this up. The first thing I notice… https://t.co/HdQrtwcGqK
— Mychie Jean (@Mychie Jean) 1540220222.0

Meanwhile, Saudi Arabia has struggled to come up with a viable explanation for Khashoggi's death other than a planned assassination.

First, the cause was a "fistfight" gone wrong. Then word spread that Khashoggi died in a chokehold.

“That is how he died,” one Saudi official said. “It didn’t last that long.” No reason why Khashoggi would start a fight with 15 Saudi guards was given.

It then took the Saudi government 18 days to acknowledge that Khashoggi was dead.

On Sunday, however, the kingdom's Foreign Minister Adel al-Jubeir told Fox News that Khashoggi's killing was "murder" and a "tremendous mistake," but that  they "don't know where the body is."

Turkish officials claim to have audio recordings of what really happened to Khashoggi, which reports say included an interrogation, torture, and dismemberment while the journalist was still alive.

President Donald Trump has vowed "severe punishment" if the evidence shows the Saudi government was behind the assassination of Khashoggi. On Saturday, Trump told the Washington Post that “obviously there’s been deception, and there’s been lies" on the part of the Saudis.

Still, the president has emphasized the strategic importance of the U.S.-Saudi relationship, referring to the kingdom as an "incredible ally" and brushing off suspicions that Crown Prince Mohammed bin Salman ordered the murder of a journalist.