Sarah Sanders Just Claimed Donald Trump Is Not Asking Taxpayers to Fund His Border Wall, and People Can't Stop Calling Her Out 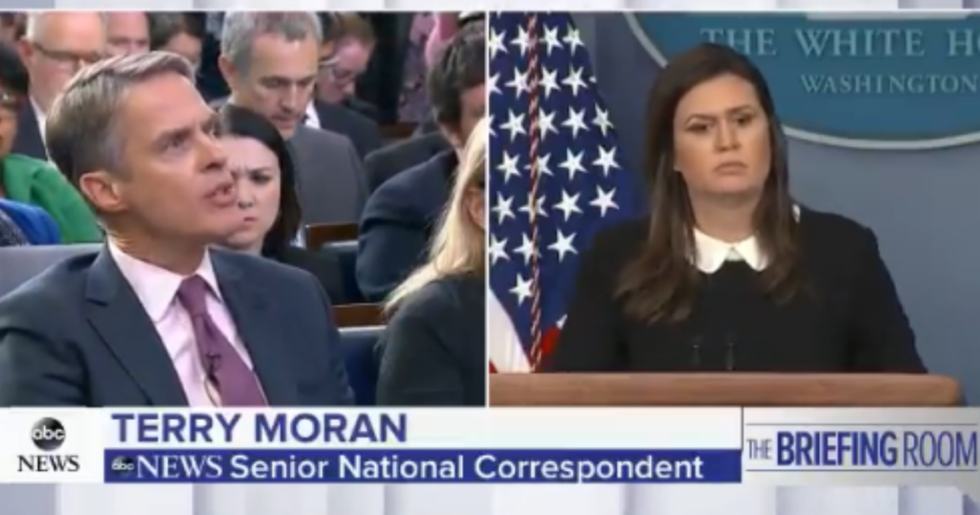 Trump previously threatened to force a government shutdown if Congress did not grant him $5 billion for a border wall, saying he would be "proud" to shut down the government "over border security."

During today's brief press conference, however, Sanders backed off that threat, saying they are looking for funding elsewhere, i.e., not from Congress.

ABC's Terry Moran pressed Sanders on "where the additional monies for the wall are going to come from." Citing the ballooning federal budget deficit, Moran asked Sanders why Trump is "asking the American taxpayer" to foot the bill when he promised that "Mexico was going to pay" for the wall.

"We're not asking American taxpayers for that. We are looking at existing funding through other agencies right now that we can draw on immediately."

She continued: "The president has been clear that the USMCA deal would provide additional revenue through that deal that would show that Mexico is paying for the wall."

"The president has been clear that the USMCA deal would provide additional revenue through that deal that would sho… https://t.co/i6YaKG06Qp
— ABC News Politics (@ABC News Politics) 1545161447.0

"Have you done the math on that?" Moran asked of Sanders's plan to get "more revenue" from Trump's recent trade deal.

Sanders insisted trade revenue from USMCA, an updated version of NAFTA, would somehow pay for the wall without costing taxpayers additional money.

As CNN's Jim Acosta points out, Sanders's plan makes no sense. If the funding is coming from federal agencies, then taxpayer money is funding the wall.

Sanders said today the WH is not looking for the taxpayers to pay for the wall while at the same time said the WH i… https://t.co/zZgDyQajEe
— Jim Acosta (@Jim Acosta) 1545163069.0

Others echoed that sentiment.

"We’re not asking American taxpayers for that." -- Sarah Sanders on looking for funding for the wall through variou… https://t.co/rPMLvuGiv7
— Jonathan Allen (@Jonathan Allen) 1545160784.0

Trump ran for president on the premise that Mexico would pay. This is never going to happen.

Does the administration understand how federal funding works?

@Acosta @PressSec Is there anyone in the White House who understands how government works?
— jchoffos (@jchoffos) 1545163158.0

@Acosta @PressSec probably. or trying to cover up for the fact that her boss doesn't understand congress holds the power of the purse.
— Harry Hawkings (@Harry Hawkings) 1545163128.0

@Acosta @PressSec And then she said that the proceeds from the new USMCA will help fund the wall. Does she not know… https://t.co/QUTVI1l2HX
— Corey Russell (@Corey Russell) 1545163437.0

Moran's line of questioning was lauded on Twitter, with many noting that Sanders did not answer the question.

@ABCPolitics @TerryMoran Great line of questioning here by Moran. Sanders had the disposition of someone who had to… https://t.co/OxJ7Oq7Az4
— Eric Johnson (@Eric Johnson) 1545163454.0

Math is not Trump's strong suit.

@ABCPolitics @wavingcrosser @TerryMoran If Trump is the patriot billionaire he says he is then why doesn't he just pay for the damn wall?
— VoteNoGop (@VoteNoGop) 1545165862.0

Trump and Congress have until midnight on Friday to avert a government shutdown.