A little hole in her argument. 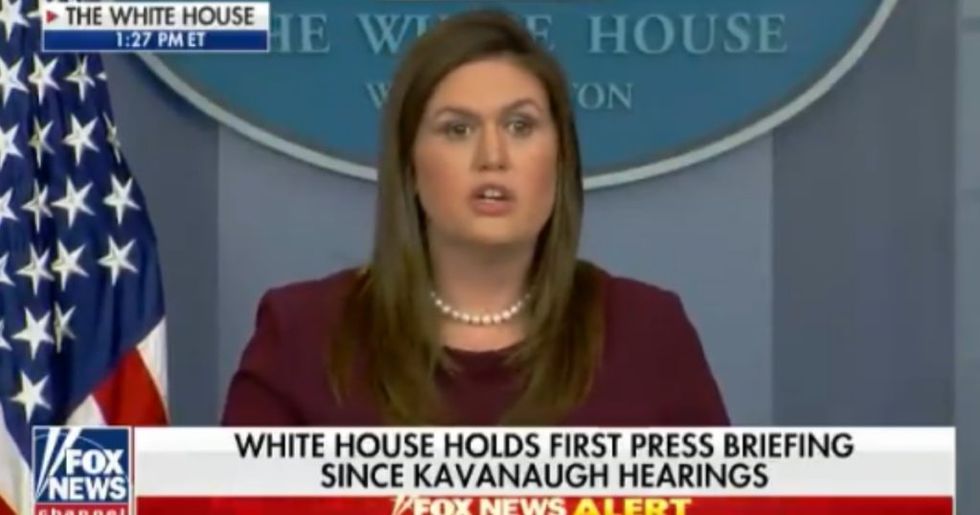 Sanders blasted Senate Minority Leader Chuck Schumer (D-NY) and other Democrats for "throwing the kitchen sink" at Kavanaugh with "no regard for the process, decency, or standards," adding that Democrats have been:

Yes, President Donald Trump was elected in 2016, but it was not because more people voted for him. The Electoral College decided the 2016 election, not the "voice of American people," which by a margin of nearly three million, chose Hillary Clinton.

Social media wasn't about to let Sanders forget that.

Sanders also went after Democrats who have questioned Kavanaugh's truthfulness over his drinking habits during high school and college, stemming from allegations that he sexually assaulted several women during his youth while intoxicated at house parties.

Democrats have thrown "11th-hour accusations" in a "smear campaign" against Kavanaugh with "no evidence," Sanders said." The FBI is currently investigating the aforementioned claims against Kavanaugh before the Senate begins confirmation proceedings on Friday.

"One thing is clear - Democrats want to block Kavanaugh and hold the seat open until the 2020 election," Sanders said. "This is about politics, this is about power, pure and simple."

This, however, pales in comparison to when Republicans let Justice Antonin Scalia's seat sit open for a year following his death in 2016 - because they didn't want to consider Barack Obama's replacement, Merrick Garland.

Even then, when Trump picked Neil Gorsuch to fill the seat, Democrats did not mount much of an opposition. Gorsuch was confirmed with some Democratic support.

@FoxNews @PressSec Shocking that the Senate would not honor a SCOTUS nomination made by a duly elected President. #MerrickGarland
— Stan Dorn (@Stan Dorn) 1538588074.0

Many people also feel that Kavanaugh's temperament and partisanship during his hearing before the Senate Judiciary Committee last week, following testimony by his accuser, Dr. Christine Blasey Ford, is wholly disqualifying from a seat on the nation's highest court.

@FoxNews @PressSec Ummm yea we are opposed to his political views. Particularly the crazy partisan rant he went on… https://t.co/omFtn4ARXB
— Michelle (@Michelle) 1538588444.0

@FoxNews @PressSec They opposed to Bart O'KAVANAUGH's opinions and the fact that he lied under oath. Brett is def… https://t.co/k0GFblYU5I
— Elizabeth Vick (@Elizabeth Vick) 1538588770.0

@FoxNews @PressSec He proved himself unfit for judicial service with his shouting tantrum and disingenuous statements.
— Matt Stone (@Matt Stone) 1538588438.0

@FoxNews @PressSec Also Kavanaugh has lied repeatedly under oath, about things anyone with access to google can check.
— Deeps Tate (@Deeps Tate) 1538589410.0