The NRA is fighting them at every turn. 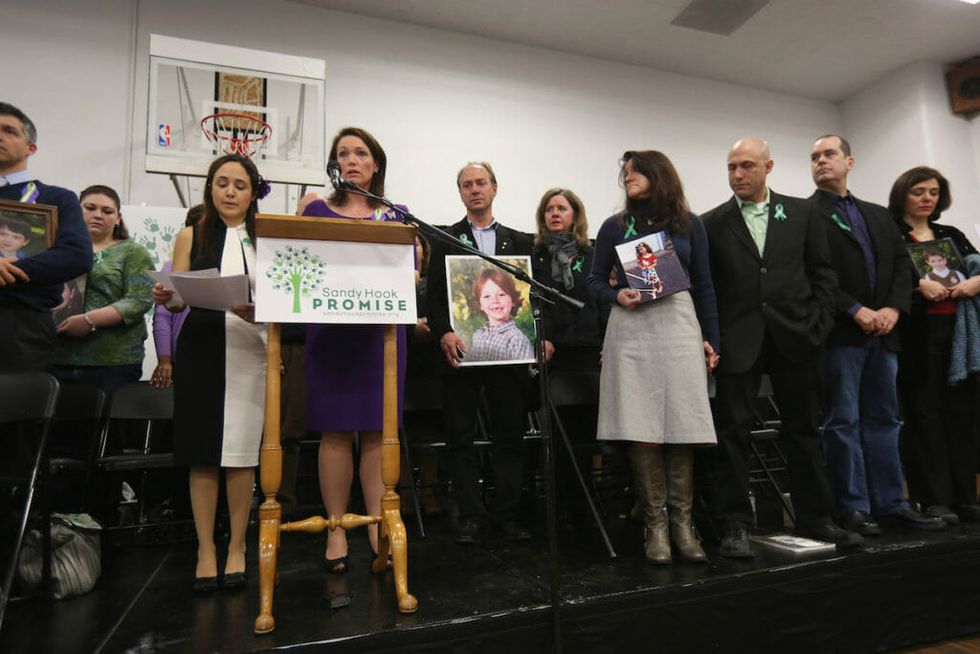 This week the families of the victims of the 2012 Sandy Hook Elementary School shooting in Newtown, Connecticut will be in Hartford, as their lawsuit against weapon manufacturer Remington progresses to the state Supreme Court. Their lawyers will argue that the companies that manufactured and sold the assault rifle used by the gunman in the shooting share responsibility for the deaths of the 26 victims, including 20 children.

This is the furthest any case of its kind has managed to get in seeking justice from those who make and sell military-style weapons to civilians.

According to the New York Times, the plaintiffs' lawyers believe they can circumvent a 2005 federal law that protects gun companies from litigation, so long as they can get the court this week to allow for a jury trial. If they succeed in this, the hope is that the subsequent discovery process will produce the companies' internal communications, which could then reveal damaging information that can be used against the defendants in the courtroom.

Both sides of the gun control debate have buried the court with amicus briefs, which are legal documents filed by non-litigants (those not suing or being sued), yet have a strong interest in the case. The National Rifle Association argues in their brief that allowing the case to move forward threatens to “eviscerate” the gun companies’ legal protections.

After years of dismissals and appeals in lower courts, the Supreme Court hearing arrives just before the five-year anniversary of the December 14 Sandy Hook shooting, and just a handful of weeks since the Las Vegas, Nevada and Sutherland Spring, Texas mass shootings. While this may bolster the lawyers' arguments, and strengthen support for the plaintiffs' case against gun manufacturers and sellers, there is sill at least one major legal hurdle to overcome.

In 2005, a Republican-controlled Congress passed the Protection of Lawful Commerce in Arms Act, which restricted lawsuits against gun makers and sellers by granting industrywide immunity from blame when one of their weapons is used in a crime. This law was passed just after the same Congress allowed an assault weapon ban to expire in 2004. The lobbyists and lawyers behind the law, bankrolled by gun manufacturers and advocated by the NRA, cited a need to protect against predatory and politically driven litigation.

But the families of mass shooting victims do not believe that gun manufacturers and sellers should be above the law.

“It doesn’t make any sense at all that these products are free of liability,” David Wheeler said in a recent interview. His son, Benjamin, was 6-years-old when the Sandy Hook gunman fatally shot him. “It’s not a level playing field. It’s not American capitalistic business practice as we know it. It’s just not right.”

There is a potential loophole in the 2005 law that the plaintiffs' lawyers hope to exploit in order to get their jury trial. Sale and marketing practices that violate state or federal laws, as well as negligent entrustment, invalidate the legal protections and thus leave the companies open to litigation. Negligent entrustment is when a gun is carelessly given or sold to a high-risk person, and that is what the lawyers are pursing. While this has been used with moderate success against dealers, the Newton case is the first time it has been aimed as high up the chain as the weapons manufacturer themselves.

The lawsuit argues that because the AR-15, the type of assault rifle used by the gunman in the Sandy Hook shooting, is a military weapon designed to maximize fatalities on the battlefield, gun companies should never have sold such a powerful weapon to an untrained civilian. The suit is also targeting the marketing and product placement of the assault rifle in video games and toward high-risk buyers.

An AR-15 was also used in the Texas and Las Vegas shootings, as well as in Orlando last year.

The Newtown lawyers hope that their case before the Connecticut Supreme Court will provide a legal road map for other survivors and victims' families in their pursuit of justice. Survivors of the Las Vegas shooting, the deadliest in modern U.S. history, filed a class-action lawsuit against the makers of weapon-modifying bump stocks last month.