Paul Ryan Thinks Trump Revoking Security Clearance of Obama Officials Is No Big Deal, and His Response Has People Concerned 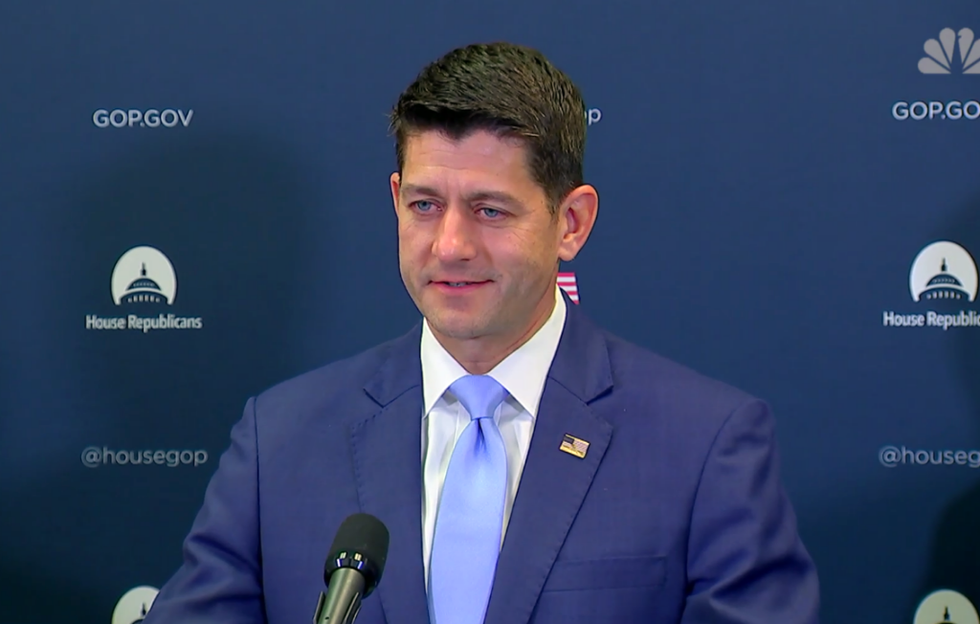 Some are lifelong Republicans, some Democrats. None are currently implicated in ongoing investigations involving breaches of national security either, unlike some advisers still employed by the federal government.

So what do these six individuals —all private citizens now— have in common that warrants threats of revoking their security clearances?

All have been critical of President Donald Trump in the media or on Twitter. Which makes Trump's threat of revoking their clearances appear purely retaliatory; targeting his critics for the offense of being, well... critical.

Given the chance to gauge the reaction to this announcement with the 3rd most powerful man in Washington —based on order of succession to the presidency— reporters took it.

Asked what he thought of Trump's threat against private citizens, Republican Speaker of the House Paul Ryan's response?

In the video of the exchange, the reporter asks if it is a dangerous road to go down, using the powers of the presidency to target private citizens who criticize the President.

Ryan's casual response, which he makes twice, raises concerns about his own fitness to provide a key component to the United States federal system of checks and balances. The three branches —executive, legislative and judicial— function together to keep one branch from gaining too much power.

Or at least according to the U.S. Constitutional framework.

This is not the first time Speaker Ryan received condemnation for enabling Trump or being complicit.

Republican leadership took heavy criticism in the lead up and wake of Trump's closed door private meeting with Russian President Vladimir Putin in Helsinki, Finland, and in failing to demand accountability or transparency after the President's disastrous Helsinki news conference remarks.

The hashtags #TreasonSummit, #ComplicitInTreason and #ComplicitGOP trended heavily on social media and were often aimed at Ryan and Senate Majority Leader Mitch McConnell.

However, unlike McConnell who seeks reelection in November, Speaker Ryan is a lame duck. But what exactly does that mean?

In political terms, that means the Wisconsin legislator serves out his current term in the House of Representatives and then he's done. For now.

When Ryan announced his retirement, pundits speculated if he intends to distance himself from Washington in anticipation of running for another office in 2020. But others wondered if Ryan could even win again in Wisconsin.

Conservative Republicans and Trump supporters refer to him as a RINO —Republican In Name Only— while Democrats and progressive independents have far more colorful monikers for him.

After Ryan's retirement announcement, some suggested he should immediately step down as Speaker so a new Republican Speaker with an active political future could take over. However unlike the Senate, where McConnell also faces pressure to step down, the entire House of Representatives could turn over every two years.

All 435 House seats are up for reelection every two years. In the 50 member Senate, terms of six years are staggered so only 1/3 of seats face reelection in each 2 year election cycle.

Even if Republicans chose a new Speaker, they may not get reelected. So why paint a target on their back in a climate where the GOP is damned with the hardcore base if they oppose Trump, and damned with everyone else if they don't.

So Ryan remains, where he often faces criticism for phoning it in until he's done. Tuesday's dismissive remarks regarding Trump's potential stepping into glorious leader territory, more akin to Kim Jong Un's style than a United States President, failed to improve Ryan's image.

While as the Speaker mentioned, several of the targeted people no longer have security clearances, nor do they care if theirs is revoked, the issue is the threat, not the harm it won't do if carried out.

Former CIA Director Michael Hayden stated a revocation hurts the current administration far more than him. He'll still be able to say what he wants in the media or on social media, but the Trump administration won't be able to consult with him any longer.

Getting a read from an expert who may have dealt with a situation before is the primary reason for maintaining security clearances for retired or resigned employees and officials. Hayden remains unaffected if Trump decides to cut off his nose to spite his face.

But the threat, by a sitting President, in an attempt to silence his critics affects more than just the current administration. As the reporter asked Ryan today, is that a road we want to go down?