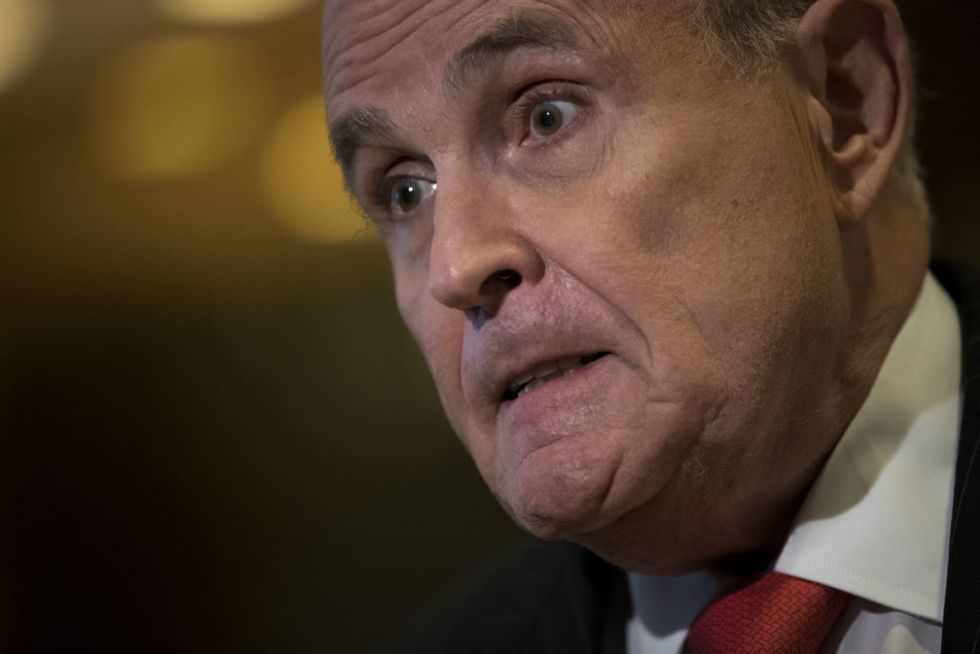 As former New York City Mayor Rudy Giuliani continues his media blitz in defense of President Donald Trump, his admissions and erratic behavior left MSNBC's Joe Scarborough wondering if he is still all there.

On Tuesday morning, the early morning talk show host and former Republican Congressman suggested that Giuliani was passed over for a potential Cabinet position because he was "losing it," “falling asleep five minutes into meetings” and “drinking too much."

Scarborough also compared Giuliani's style of defending Trump to "a monkey throwing poo at the wall."

It’s not 3-D chess. That’s not even checkers. That’s a monkey throwing poo against the wall, and it doesn’t usually turn out well.

Giuliani was at a cigar bar in the penthouse of Kushner's ill-fated 666 5th Ave building before his disastrous Hann… https://t.co/yftNJhaMoi
— Helen Kennedy (@Helen Kennedy) 1525833123.0

In an interview with Politico, however, Giuliani fired back at Scarborough, defending his actions and claiming to be "wide awake."

None of that is true...I’m not sleeping now. I’m in Dallas. I’m wide awake. I’ve handled numerous cases including some sensitive cyber matters. I’m a lot more aware and intelligent than Joe has ever been and a lot more accomplished. Joe hasn’t been knighted by the Queen of England. He hasn’t run a U.S. attorney’s office, much less a city that he turned around or went through 9/11.

Giuliani also responded to the allegation that he had been drinking heavily during the day.

I’m not drinking for lunch...I may have a drink for dinner. I like to drink with cigars.

The White House has remained silent on Giuliani's behavior, which has included acknowledging Trump's awareness of hush money paid to adult film star Stormy Daniels. Prior to Giuliani, Trump had steadfastly denied he knew about the money.

Last Friday, MSNBC's Chris Matthews suggested that Giuliani's decision to appear on Sean Hannity's show was a mistake, given the president's complex legal entanglements. Like Scarborough, Matthews also insinuated that Giuliani may have been drinking, thus explaining his wild manner.

Giuliani's critics aren't limited to MSNBC, though. Attorney Lanny Davis, who worked for the Clinton White House during the Kenneth Star investigation, opined that the former mayor isn't as sharp as he used to be.

The serious issue here is that Rudy Giuliani, at least during the national convention speech and watching him on TV through the fall, seems like he’s lost more than one card in the deck.

Nevertheless, Giuliani continued to defend his garish style in his Politico interview, stating that it's his job to be the president's shield.

It’s far better that I draw the fire than the president. That’s what a lawyer is for. Some lawyers don’t think so. I think he’s very comfortable now that someone is doing that for him.