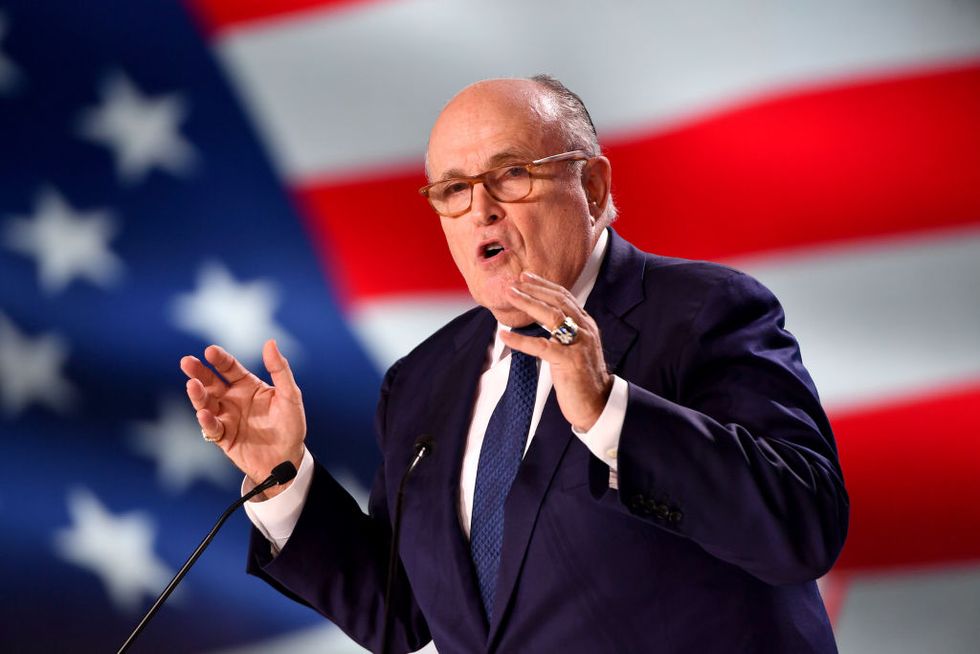 PARIS, FRANCE - JUNE 30: Former Mayor of New York Rudolph Giuliani speaks during the Conference In Support Of Freedom and Democracy In Iran on June 30, 2018 in Paris, France. The speakers declared their support for the Iranian peoples uprising and the democratic alternative, the National Council of Resistance of Iran and called on the international community to adopt a firm policy against the mullahs regime and stand by the arisen people of Iran. (Photo by Anthony Devlin/Getty Images)

"When I said today that there and therefore... and that collusion also is no crime, I've been saying that from the very beginning, [and] so has John Dowd," he said, referring to the man who once led Trump's legal team.

He added: "It's a very, very familiar lawyer's argument than the alternative: My client didn't do it, and even if he did it, it's not a crime."

Giuliani's clarifications come after he sparked significant criticism earlier today when he said during an interview on “Fox & Friends” that special counsel Robert Mueller should end his investigation.

“If we had anything to do about it, I would ask the special counsel to put out his report and show us what he’s got, you know, show your hand,” Giuliani said.

Final! Get it over with. Make your case to the Justice Department that you have to continue to investigate. I think you’ll find that there is no reason. Look, think about this: You could investigate an innocent man forever. If you decided he robbed the bank, and he didn’t and he proved to you 50 different ways that he didn’t do it, you’ll look at 51, and then 52, and then 53. Then you try to get somebody who knows him and prosecute the poor person for tax evasion, so they say he robbed the bank. That’s what’s going on here!

“I have been sitting here looking in the federal code trying to find collusion as a crime,” he said. “Collusion is not a crime. Everything that’s been released so far shows the president to be absolutely innocent. He didn’t do anything wrong.”

The last two tapes, Giuliani added, referring to recordings of conversations between Trump and his former lawyer Michael Cohen “are evidence in his favor”:

Giuliani later made the rounds on CNN to disparage Cohen’s credibility. Cohen claimed last week that Trump did, in fact, know about a meeting his son Donald Jr. and several other members of his campaign had with a Russian intermediary who promised damaging information on Hillary Clinton.

“What the heck are you picking on me for saying he was an honest, honorable man, when I didn’t know he tape recorded conversations with his clients?”

Giuliani used to argue that there was no possibility at all that the president colluded. Now, he's appeared to change his tune, and this has not gone unnoticed.

Watching Giuliani’s @CNN @NewDay interview was bizarre. There was a noticeable shift in his strategy. Instead of pu… https://t.co/NwxTm8WhAu
— Renato Mariotti (@Renato Mariotti) 1532959759.0

The change in Giuliani's strategy echoes the rather tumultuous relationship between Trump and former lawyer John Dowd, who was once the lead attorney for the special counsel investigation. Dowd resigned in March. According to The New York Times, which spoke with an individual briefed on the matter, Dowd had concluded that the president was ignoring his advice.

Dowd, who considered leaving his post several times since taking over as head of the president’s legal team last summer, kept his statement to the press short and crisp.

"I love the president,” Dowd told New York Times reporters in a telephone interview. “I wish him the best of luck. I think he has a really good case.”

Dowd’s departure came after a hectic few days, during which the president attracted significant criticism for assailing Robert Mueller. Trump also had earlier announced his intention to sit down for an interview with Mueller and his team, despite Dowd’s advice not to. (Dowd was just one member of an extensive legal team who, aware of the president’s tendency to promote falsehoods, has cited concerns that he might perjure himself during an interview with the special counsel.)