Roy Moore Answers "When Was America Great?" and We're Wondering What Century It Is 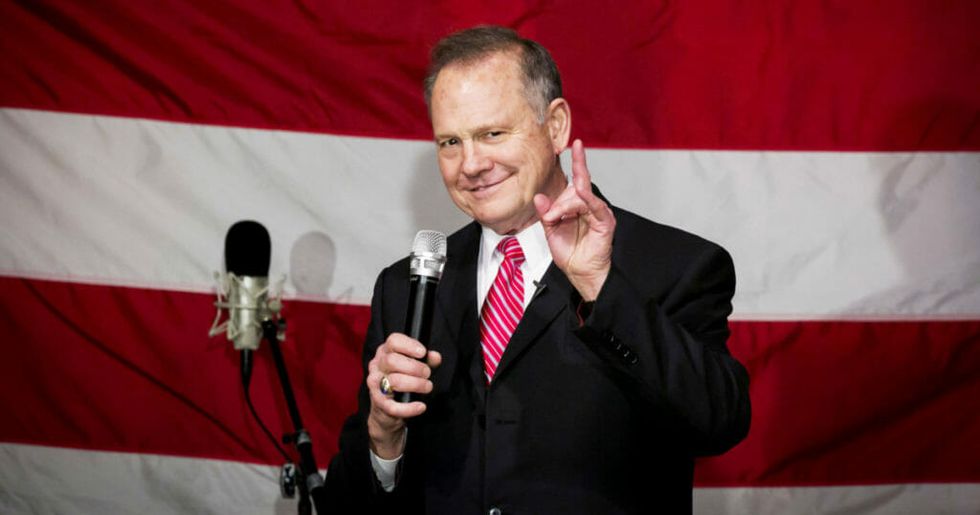 Roy Moore, Republican candidate for U.S. Senate from Alabama, smiles as he speaks during a campaign rally in Fairhope, Alabama, on Tuesday, Dec. 5, 2017. Photographer: Nicole Craine/Bloomberg via Getty Images.

When Donald Trump made "Make America Great Again" his campaign slogan in his bid for the Oval Office, and then later his administration's motto, Alabama Senate candidate Roy Moore took it not only to heart but also one step further. As the Republican candidate running against Democrat Doug Jones for the Alabama Senate seat next Tuesday, Moore believes America was a better place at a time when slavery was legal.

In other words, he thinks America was great before the Civil War, when slavery was still an American institution.

During his campaign earlier this year, an audience member asked Moore for his opinion on when America was last great -- a question we all too often now hear thanks to our current president.

I think it was great at the time when families were united—even though we had slavery—they cared for one another…Our families were strong, our country had a direction.

The individual who asked the question was African-American, and one of only a few in attendance at the rally, according to the Los Angeles Times, which featured Moore's remarks back in September. With a straight face, Moore implied that having families "united" is worth overlooking the enslavement of other human beings.

At the same rally, he also referred to Native Americans and Asians as “reds and yellows,” the Los Angeles Times reported.

With the vote for the Senate seat less than a week away, former Obama administration official Eric Columbus tweeted Moore's comments as a reminder of the kind of man Moore is, who half of Alabama is considering as their next senator.

Vox reached out to Hannah Ford, deputy campaign manager for Moore, to ask if her candidate really thinks that the last time America was great was when it still had slavery. She responded, “To suggest such is recklessly malicious. Judge Moore clearly made his point: America is great when our families are united, as in the husband and wife committed to each other and raising their children to be good citizens.”

Many interpret Trump's slogan of "Make America Great Again" as a rallying cry for white nationalists, and he has publicly endorsed Moore -- he reportedly said "Go get ‘em, Roy!" during a recent phone call with the candidate. Then earlier this week, Trump made it clear via his tweeting platform just how much he wants Moore to win.

Following Trump's example, Moore has also questioned former President Barack Obama's place of birth, and once suggested Muslims should not be allowed to serve in Congress. Moore is also a former Alabama Chief Justice who was suspended, twice, for refusing applications for same-sex marriage licenses, even after that the United States Supreme Court ruled that same-sex marriage is a constitutional right.

Despite these actions, and his comments, and other controversies, the Republican candidate is neck and neck with candidate Doug Jones in this special election for the Senate seat, left vacant by Jeff Sessions when Trump appointed him as Attorney General.

Riding the wave of Columbus' viral tweet, Jones has been reaching out to black voters in Alabama this week, blasting Moore as “racist.” A super PAC backing Jones is targeting Facebook ads at African-American voters in a bid to boost turnout for the Dec. 12 election.

“A racist shouldn’t represent you,” read the text of one ad over an image of Moore. “If Roy Moore goes to Washington, he’ll make decisions that will impact your family for years.”