The New York Times Just Imagined the News Report the Day After Election Day 2020 Between Donald Trump and Elizabeth Warren, and People Are Torn

Which way do you think it will go? 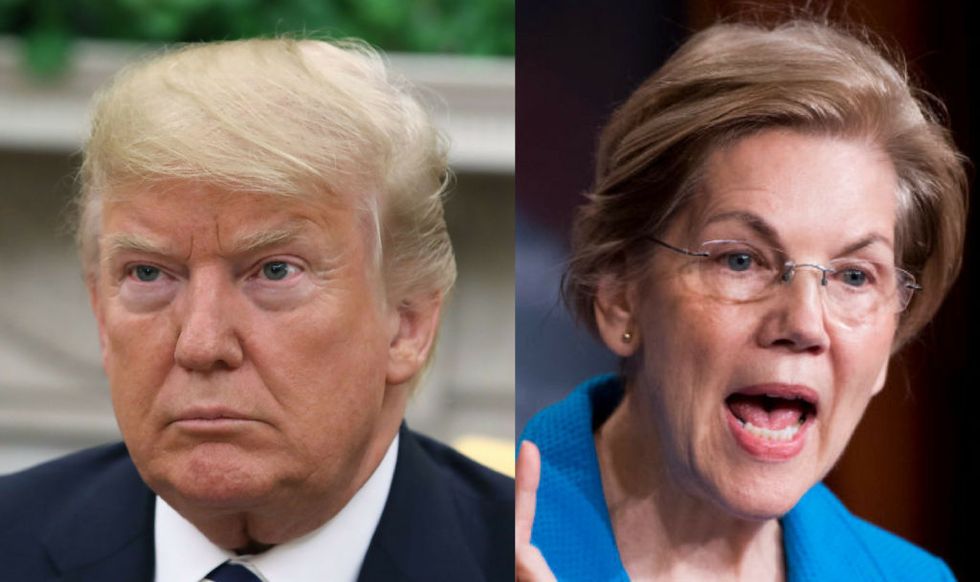 Many Americans will never forget the feeling of dread--and, for some, vindication--that overtook the country in the early hours of November 9, 2016. The victory of then-candidate Donald Trump was one of the biggest upsets in United States political history, especially because a majority of Americans found it literally upsetting. Now, the New York Times is channeling those same emotions again. This time, their eyes are on the future.

In one piece by Bret Stephens, Trump wins re-election in 2020. In the other, by David Leonhardt, Trump loses to Senator Elizabeth Warren (D-MA).

Stephens imagines Trump's reelection victory to be a result of a growing narrative the administration is pushing: a booming economy for which Trump is attempting to take credit and a divided Democratic party still licking its wounds. Trump still loses the popular vote in Stephens's imagination, but actually wins more electoral votes. Leonhardt paints a narrative that many predict and for which Democrats hope: Trump loses by a relative landslide with Americans fed up by erratic news cycles and chaos-inducing tweets having become the new normal.

Though the election is still over two years away, Americans are apprehensive about 2020, especially since the 2016 election proved that when it comes to Trump, all bets are off. Strong reactions by Twitter users across the political spectrum indicate that the emotional highs and lows of 2016 remain raw within the national psyche.

@NBCNews @NBCNewsTHINK If the GOP can ride the economic message to Midterm election day they have a chance. I suspe… https://t.co/JlEB9DvrpC
— Chris Morris (@Chris Morris) 1532948308.0

Though Trump's approval rating has yet to reach a fifty percent threshold and the administration has been embattled with scandals, many Democrats still refuse to be smug about the impending election's outcome.

Many Democrats are making the case that, despite the national atmosphere of vilification and distrust attributed to the current president, his reelection is not only possible, but likely.

Stephens imagines this would be due to the economy:

In the end, a bitterly fought election came down to the old political aphorism, popularized during Bill Clinton’s successful 1992 run against George H.W. Bush: “It’s the economy, stupid.” This time, however, it was the Republican incumbent, not his Democratic challenger, who benefited from that truism...In exit poll interviews, Mr. Trump’s supporters frequently cited the state of the economy to explain their vote. “What part of Dow 30,000 do the liberals not understand?” Kevin O’Reilly of Manchester, N.H., told The Times.

Many Americans on Twitter, Democrats included, seem to agree with him.

@Shermichael_ Nationalism pays in America. No one cares if a few snowflake minorities are upset, or if you trigger… https://t.co/MFFR9zhYYM
— Darrin Evans (@Darrin Evans) 1531442787.0

Meanwhile, Leonhardt's imagination fantasizes that the climate created by the last four years will finally be too much for Americans to allow:

Exit polls showed disillusionment across the swing states that Trump won four years ago and lost this year, including Wisconsin, Michigan and Pennsylvania. In a sign of the country’s changing political map, he held on to Ohio and Iowa, two relatively old and white states — but became the first Republican since 1992 to lose Georgia. Huge margins among women were central to the victory of Warren, who will become the country’s first female president. “I’m just tired of him,” said Jennifer Diaz, a 47-year-old from Cobb County, Ga., outside Atlanta.

A campaign against Senator Warren would certainly be divisive, given Warren's increased criticism of the president and his repeated use of the slur "Pocahontas" to refer to the senator. The president even used the term in the presence of Native American veterans visiting the White House.

Americans wait with increasing anxiety for the November night that, to many, seems painfully far away and to others, looms all-too-near. It won't be until then that the nation gets the answer to the question it's been asking since November 9, 2016: Is this our new normal?