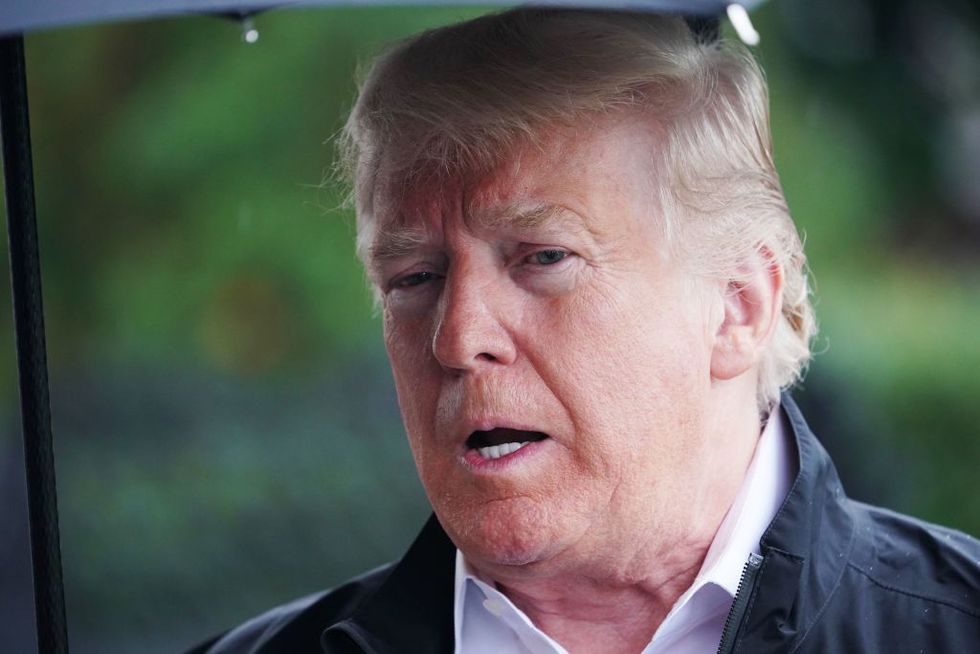 US President Donald Trump speaks before boarding Marine One from the South Lawn of the White House in Washington, DC on October 15, 2018. - Trump is heading to Florida after Hurricane Michael devastated the state. (Photo by MANDEL NGAN/AFP/Getty Images)

Fox News has often been accused of serving as a mouthpiece for President Donald Trump and his policy proposals, but the latest message from the network's research team contradicts the president's claims that the stock market is the healthiest its ever been under his watch.

Fox News Research noted that the Dow, S&P 500 Index, and Nasdaq had all suffered their worst monthly point loss as of last month. The team dubbed October 2018 "A Scary Month for Stocks."

The Fox News Research team weren't the only ones noting last month's losses.

Earlier this week, political scientist Brian Klaas observed that the stock market is "down 2,174 points from late January 2018" an eight percent drop. The Dow is also lower than the day the president signed the GOP tax plan into law on the promise that the stock market would see significant gains in its wake. (Economists have long said otherwise.)

Bishop Talbert Swan of the Church of God in Christ said that not only have all of 2018's gains been "completely wiped out," but that the president and the GOP have added $1.3 trillion dollars to the national debt in one year, an amount which Business Insider notes is "the highest total debt issuance since the depths of the Great Recession."

In recent days, the president, in messages meant to assuage his base, has characterized the stock market's losses as "a little pause," although yesterday he wrote that the stock market had risen "more than 400 points."

The president was also taken to task for his claims about the stock market last week when construction equipment manufacturer Caterpillar blamed its disappointing stock market performance, which kept its adjusted earnings guidance for 2018 steady, falling short of the increase analysts had projected, on his tariffs. The company’s analysts say “higher material costs due to steel and tariffs” drove up manufacturing costs, which caused its stock to dive 8 percent despite an 18 percent increase in company revenue.

If you were to ask the president, however, you’d hear a different story. That day, the president responded to criticism of the tariffs his administration imposed on steel and aluminum imports, insisting that tariffs would continue so long as other countries don’t “give us a fair Trade Deal.”

Billions of dollars are, and will be, coming into United States coffers because of Tariffs. Great also for negotiat… https://t.co/pcF6LSglR2
— Donald J. Trump (@Donald J. Trump) 1540313026.0

Caterpillar’s announcement comes after electric vehicle manufacturer Polaris Industries said its suppliers “must help offset the cost of President Donald Trump’s trade wars if they want to keep doing business,” according to Bloomberg.

Polaris is “making good progress with domestic suppliers saying, ‘Hey, we’re not taking that price increase.’ Or more recently, telling our Chinese suppliers, ‘Hey, if you want to continue to be a supplier to us, you’re going to have to take some of these costs,’’’ said Chief Executive Officer Scott Wine, who noted that the president’s trade wars caused Polaris’s stock price to dip 31 percent.

The president remains steadfast in his belief that tariffs are necessary to address the signs of what he believes to be an era of waning American influence on international markets.

In March, shortly before confirming that the U.S. would impose tariffs on aluminum and steel, Trump attracted criticism for claiming that trade wars “are good, and easy to win.”

Stocks saw modest improvement today after the president wrote that he'd made some progress with China on trade.

Just had a long and very good conversation with President Xi Jinping of China. We talked about many subjects, with… https://t.co/oCSlKlE2Ny
— Donald J. Trump (@Donald J. Trump) 1541081350.0

Trump and Chinese President Xi Jinping are scheduled to meet and discuss the U.S.-China trade relationship at the G-20 conference at the end of this month.